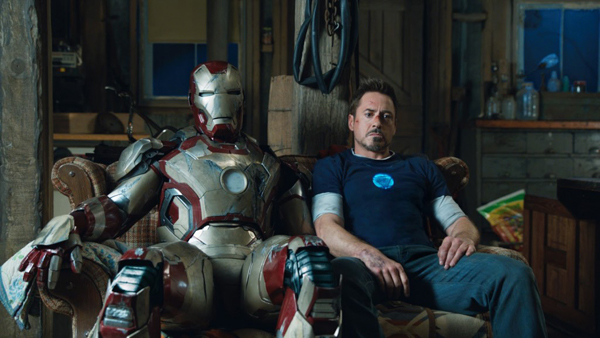 Audiences couldn’t ask for a better kick off to the mainstream summer movie season than Iron Man 3. It sets the bar so high right out of the gate that it might be insurmountable to overcome. Not only is it the best Marvel film to date (narrowly edging out Captain America: The First Avenger, the monolithic The Avengers, and vastly improving on Tony Stark’s second outing in his super suit), but it’s also just an expertly designed and crafted bit of big budget blockbuster filmmaking that rarely ever gets made. The fact that it comes in the form of a third entry in a franchise that was always designed to tie into a bigger universe makes it even more admirable and shocking to see. It could very well even clear high end expectations from fans expecting more of the same old same old, but more than that, even outside of the franchise it’s just an excellent movie. Period.

A series of events beginning on a fateful millennial New Year’s Eve in Sweden has led Tony Stark (Robert Downey Jr.) into facing off against a new foe that he in part created. A mysterious terrorist called The Mandarin (Sir Ben Kingsley) has begun carrying out a series of large scale bombings across the United States with the help of a band of nearly indestructible super soldiers created by a formerly nerdy mad scientist (Guy Pearce) that was ignored and ditched by Stark all those years ago.

This terrible twosome seems to have Tony’s number. They nearly decimate and destroy everything he holds dear in his cynical heart. The events of The Avengers have left Tony to become even more of a workaholic with severe PTSD issues that leave him prone to panic attacks at inopportune times. The few friends he has are either targets for attack or unknowing pawns in a larger scheme and his lady love (Gwyneth Paltrow) is more in harms way than ever before.

Making things even more complicated is the fact that Shane Black – directing his first entry in the franchise after working with Downey previously on the perennially underrated Kiss Kiss Bang Bang and penning the Lethal Weapon films – has made a film not too far removed from the vein of Soderbergh’s Ocean’s Twelve, Raimi’s Spider-man 2, or Brad Bird’s Mission: Impossible – Ghost Protocol. This isn’t a movie about a hero who has things always going right for him. It’s a film about what happens when everything that can go wrong does go wrong. What makes it even more difficult is that Tony isn’t the swaggering ladies man and gadabout playboy he once was. He’s a broken man here even before anything hits the fan. When things go wrong, it takes a lot out of him to simply get back up again, let alone set things right.

The film acts as unequivocal proof that no one understands the Tony Stark character as well as Robert Downey Jr. does. He never changes Stark’s quippy mannerisms or highfaluting upper class trappings, but what he manages to do here is take all of the character beats that made Tony the man he once was and turns them into coping mechanisms here. Tony is a deeply frightened human being that’s falling lower than he previously had been before. He’s genuinely scared by what he sees around him and he sometimes lashes out in ill advised ways. It’s his best outing as the character and one would hope that if he continues on with the franchise that he continues to explore this side of Tony in deeper depth.

Black also adds a new kind of energy that the franchise was in need of. Taking over from previous helmer Jon Favreau (who still appears as security expert Happy), Black takes the franchise back to its essence instead of trying to tie into another larger work. The plot itself is so incredibly simple despite a wealth of twists, but it doesn’t need to be complex as long as it’s actually good. It reminds the viewer that Tony is a bit of a genius, and keeps him out of his malfunctioning titular suit for a good chunk of the film while he investigates just what the heck is going on. Tony has to use his wits rather than fall back on them to outsmart someone.

But the best thing about Black’s outing is that there’s absolutely no filler material here. There’s no recap of The Avengers or the previous films because it isn’t necessary. It’s assumed that the audience already knows who Tony is, and even if they don’t by some strange reason, they don’t need to. They might even like him more by not knowing who he was. It also doesn’t go out of the way to perform the classic blunder of most franchises once they reach this point, which is to add unnecessary backstory to the character. This is a story about moving forward based on past events, not dwelling on what already happened. It’s practically a clinic not only in terms of how to make a super hero film, but also how to make remove a film successful from a larger entity to make the best stand alone story possible. Without credits (and the requisite stinger at the end) the film is and exact and efficient two hours. That’s what this kind of filmmaking should be.

Black also gets a chance to show off his own buddy cop background by having Tony team up with his best friend James Rhodes (Don Cheadle) in the second half that sees the now rebranded War Machine pilot implicated in a larger conspiracy. When they are on the run together, the banter between the duo definitely harkens back to the work that Black is best known for. It’s snappy, funny, runnin’ and gunnin’ as the two have to do battle without any of their normal shielding. That is, until the stunning climactic sequence, of course.

Black (along with co-writer Drew Pearce, who also had a hand in Pacific Rim coming out later this summer) also gives the audience two perfect villains. Kingsley alternates between goofy and terrifying with great aplomb. His actions speak louder than words for reasons that are revealed in one of the film’s most killer twists, but when he’s seen on camera it’s hard not to marvel at how his videotaped messages of terror to the world are cut to look like a cross between an infomercial and a circa-1999 styled pro wrestling promo. Pearce gets to plays the more human and flawed braniac with a grudge, and he does a fine job of it in a bit of inspired casting.

Through these villains Black also has some very interesting and somewhat subversive things to say about Tea Party Republicanism and how audiences watch these kinds of films. It’s hard to explain without giving away the film’s biggest reveals, but there’s definitely some really interesting and thoughtful subtext going on here that clever viewers should be able to pick up on. It’s something you can only get from a simple story told in the best possible way.

There’s so much to talk about in terms of just how surprisingly great Iron Man 3 manages to be, but I’ll cut it off here for now because saying anything more gets into spoiler territory. It’s the antithesis of shallow blockbuster filmmaking while delivering everything such a product needs to succeed. It’s a fun and breezy start to a summer movie season that looks to be one of the most stacked release schedules on record. We can only hope that most of what follows Mr. Black’s film can be half as good as what he’s come up with. And no, I can’t believe I just said all of these things about the third film in a superhero franchise, either.