Kate Kane repeatedly credits her father, Colonel Jacob Kane, for the empowerment necessary to find her strength, her purpose. “To be like [him]. To learn to keep it together” remained her mantra following her mother’s murder and sister’s disappearance. Pulling lessons in integrity and how to “soldier on” from the man who found a way to remain protective of his daughter without disrespecting her autonomy and individuality. Paternalism without patronizing. 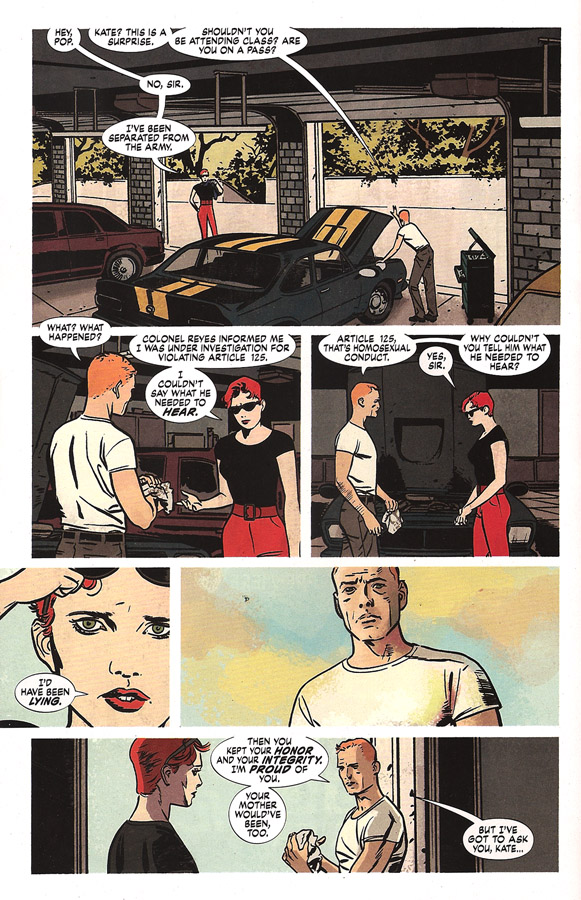 The Army provided Kate with an opportunity to honour the man who guided her through triumph and trauma. When she winds up discharged under Don’t Ask, Don’t Tell, Kane’s reaction to the news proves that she does just that. Her expulsion isn’t shameful. Her lesbianism isn’t shameful. Her refusal to lie just to save face is a point of major pride – proof that the values her parents hoped to instill shaped her character.

Vigilantism satisfies Kate’s desire to keep innocents safe. But while she’s the one out on patrol, Batwoman is an almost codependent collaboration between father and daughter. Kane doesn’t attempt to squelch her newfound sense of self. He accepts her choice to become a soldier of an entirely unexpected sort…with some conditions. Namely, that she undergo three years of black ops training and use the equipment, base, intel, and advice he supplies.

Especially the warnings about Batmanning all over the place. Turns out the whole “obsessive pursuit of DARK VENGEANCE” thing Lindy-hops an individual’s psyche into a greasy paste.

Kane harbours an overwhelming, all encompassing love for his daughter that always remains healthy and grounded. In sparing nothing to give Kate absolutely everything necessary to serve as Batwoman – even looping around a law here or there – he confirms his role as her protector and provider. However, he shows profound admiration and respect for her personal needs and wants, allowing her the space required to learn her own lessons and enjoy her own pursuits. Within reasonable parameters, of course.

Alongside every encouragement to slough off the pain comes gentle reminders that sometimes even the sturdiest among us require rest. He challenges Kate while stopping short of overexertion. Though frequently reminding her to always move forward, Kane never deploys rhetoric that shames weakness. That his daughter suffers greatly as a result of numerous traumatic experiences always factors itself into every strategy he crafts for her. Denigrating Kate’s emotions won’t make them puff out of existence. Opportunities to understand and, when applicable, overcome them establish her as a more effective fighter – and the confident, empathic woman he and his wife hoped to raise.

His is a responsible, practical parenting style infused with passionate filial devotion. One based around nurturing a woman of honesty, of integrity, and of strength, navigating the world on her own terms rather than the arbitrary rigidness of societal expectations. Kane teaches Kate how to behave like a compassionate, just, and truthful person through his day-to-day behavior. A self-aware, self-actualized man such as himself realizes that stuffing her skull full of words without actions crafts a poor template for growing an extraordinary child.

Even when caught lying about daughter Beth’s murder, he handles himself with appropriate grace and dignity, once again acting as the man he wishes Kate would consider a role model. Kane accepts that the decision to withhold information eventually carpet bombs their relationship, and immediately makes daily attempts to instigate repairs. Though his beloved daughter rebuffs every sincere chance to reconcile, he never once punishes her, accepting that the blame rests with his well-meaning mistake. Cameron Chase and Bones at the D.E.A. snatch him away to interrogate him about Batwoman, but he refuses to cooperate. No matter how long Kane may stand in front of her door, his commitment to trying to live a just life overrides any inkling to compromise Kate’s safety in retaliation. 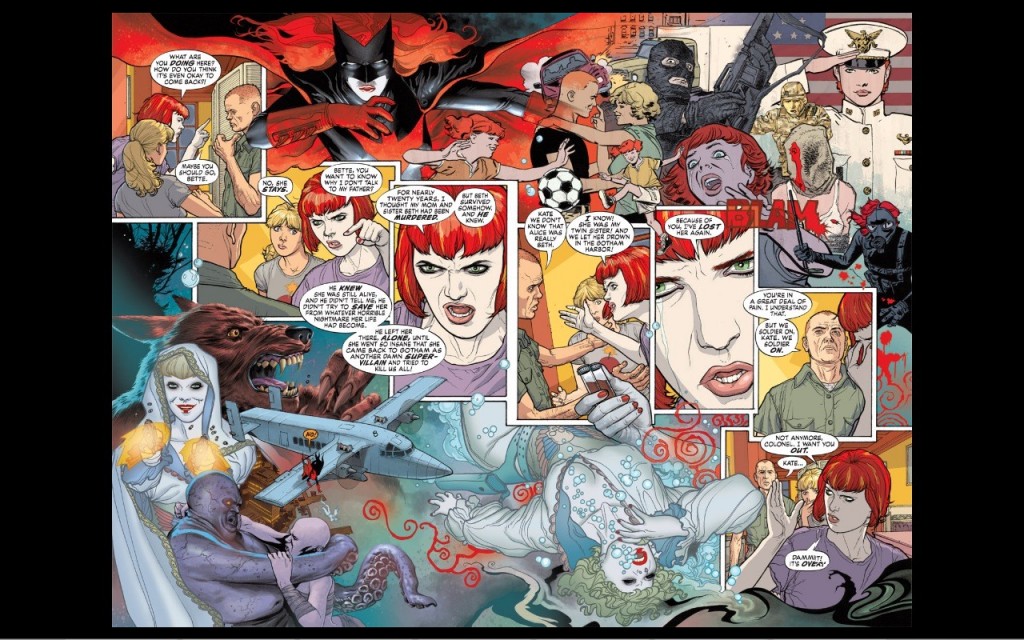 While kind and thoughtful to strangers, Kane’s interactions with niece Bette (aka Flamebird/Hawkfire/Please Don’t Pull A Pym On Us) illustrate that his principles remain fixed even when mentoring someone other than Kate. Sure, there’s undeniably an element of surrogacy to his decision to train her and provide stronger, safer offensive and defensive equipment – his own daughter wasn’t speaking to him at the time, after all.

But even removed from the context of their estrangement, Kane gives the impression that he’d still willingly supply all the love and care necessary for his niece to survive her vigilante exploits. He loves Bette enough to keep vigil beside her in the hospital as she vacillates between critical and stable, then taking her under his tutelage to ensure she never has to suffer such a gruesome trauma as getting ripped apart by The Hook again.

A glimpse inside their training session reveals how he inspires in his new trainee Kate’s very same desire to press forward and strengthen and grow, even when “every time [she] breathe[s], [her] abs feel like they’re going to rip apart.” Even when crushed beneath the burden of his own insecurity and doubt, Kane’s only concern is making sure he does right by her.

Seeing as how she manages to burn off The Hook’s face and hurl his titular appendage into the ocean, that probably means he did a stellar job.