Brian De Palma is a successful filmmaker with more than a few iconic hits (Carrie, Scarface, Mission: Impossible, etc.) and beloved cult favourites (Blow Out, Phantom Of The Paradise, Dressed To Kill) to his name. He was at the center of the movie brat director’s movement of the 70s, pals with the likes of Martin Scorsese and Steven Spielberg as they changed Hollywood forever. The Hitchcock disciple (some say rip-off artist, but they are unkind) was one of the great American filmmakers of his or any other era. Yet oddly, the director’s reputation has dipped in recent years. Thanks to moving entirely out of Hollywood to pursue his perverse, political, and darkly humorous visions in Europe, he’s now known and loved only by a certain sect of hardcore cinephiles who speak his name in hushed tones when discussing the great cinematic stylists. That’s a shame, but thankfully some noble folks out there are going out of their way to help resurrect De Palma’s good name.

This week the TIFF Bell Lightbox kicks off a summer long screening series of the master’s twisted tales entitled Split/Screen: The Cinema Of Brian De Palma. Everything from his early experimental features like Murder a la Mod to his European financed recent oddities like Passion will play the Lightbox from June 18th to September 3rd, giving Toronto De Palma nuts a summer long orgy of homage, violence, and cinematic sarcasm. To help kick off the retrospective, the Lightbox will also be screening the new documentary De Palma by Noah Baumbach and Jake Paltrow. The project spun out of the friendship between the three directors and is comprised of a two hour long conversation with Brian De Palma spanning his entire career and broken up only by montages of his finest set pieces.

Though essentially a director’s profile, De Palma is a surprisingly engaging and amusing movie thanks to its eccentric subject. Aside from when he’s on the promotional tour for his latest production, De Palma rarely ever grants interviews so his anecdotes aren’t worn out just yet. More than that, the filmmaker gleefully spins tales out of school about difficult productions, has no problem criticizing his own work, happily dips into self analysis, and delivers all of his stories with a prankster sense of sarcastic wit that’s far from common to hear coming out of the mouth of an artist of his stature. Dork Shelf was lucky enough to chat with co-director Jake Paltrow about his Brian De Palma passion project, discussing the legacy of the great filmmaker and the unique process of making his documentary. It seems like a perfect way to kick off Toronto’s summertime De Palma celebration that will help bring a lil’ welcome sleaze n’ gore to the prestigious Bell Lightbox.

Was it difficult to talk Brian into making this documentary? Because he’s said before that he does not have any interest in being interviewed unless he’s promoting a movie.

I know! It ultimately wasn’t that difficult because it really grew out of us being friends. I had a friendship with Brian and then Noah had a friendship with him independently, then we all started spending a lot of time together. Over a few years and lots of dinners with Brian, we would ask him about his career and the way the movie industry has changed during his lifetime. There was something about the way he would reply that was not only so articulate, but also so clear and rich that one day when we were walking home Noah and I turned to each other said, “If we could get on camera what he does at a dinner it would be amazing.” It was something that we selfishly just wanted to do for us and he agreed right away. My recollection of it was that he agreed and then we maybe started filming a week later because we didn’t want him to change his mind. Then we shot for like a week straight. It started as like an archive or testimonial, but what he was saying was so electric that it felt like a movie already…even though it wasn’t, you know, a typical documentary.

How much direction was involved in the conversations? Did you have to steer him where you wanted or was it just about letting him go?

Well, a lot of the stuff in the movie is stuff that he told us at dinner before. So the main discussions Noah and I had were along the lines of, “We’ve got to get him to tell us that again.” He was always very good about picking up on what we were looking for. Because we had spent so much time talking to him long before the movie, the interview had a nice natural flow to it once we started recording. The surprises only came when we had exhausted everything we wanted and started to branch into new areas. The edit was tricky because we had 30 hours of material to go through, but the only reason this movie works is because he’s talking and the way he talks. He has a quality of communication that’s rare and electric.

I was surprised by how candid he was discussing some of the movies he’s made and the people he’s worked with. I guess it’s just because he’s pretty much abandoned the studio system and doesn’t care what people think about him anymore. Was there anything that he was uncomfortable discussing?

No, I think Brian’s point of view is that he’s going to tell you what happened as he experienced it. So even if he’s telling story about someone being a pain in the ass on the set, if you actually listen closely he hasn’t disparaged anyone. The Cliff Robinson stuff comes close, but again that was him discussing the experience of working with an actor who tried to take control. That was part of the reason why we didn’t talk to anyone else, because then people would bring in their own opinions and say, “but that’s not quite what I remembered.” We wanted Brian’s subjective life story through his films. That’s what we were interested in. We wanted what he’s got, which is a lot.

Do you think Brian’s sincere when he says that he doesn’t want to make movies anymore?

No, he wants make more movies. I haven’t heard him say that.

Well at the end of you movie he has that long speech about how director’s in their 70s shouldn’t make movies anymore.

Oh, I see. I think he’s just talking about a director’s best movies. His big thing there was that you make your best movies in your 30s, 40s, and 50s. He uses Hitchcock as an example, which is a really strong opinion. But I think he means that he’s still interested making them, they just might not be his best ones. Maybe he’s right and maybe he’s wrong, but he’s got a strong point of view on it and the empirical evidence to back it up, as far as it goes. That’s interesting. I think that’s also why the friendship was something that we sought out or cultivated. He talks in the way that you hope everyone will talk about their life and career. There’s little guard. He’s very open.

Did you intend this documentary to almost feel like a film history lesson as well? His career does inadvertently chronicle the evolution of the studio system in his lifetime.

That’s definitely something that we recognized through talking to Brian. This isn’t just a movie about a director. It’s also about the shifting economics of movies and why they are making some but not making others. What happens when things go really well, what happens when they aren’t going well. What happens when studios become primarily concerned with the bottom line. Things that didn’t exist when he started. Obviously if you like movies at all, there’s a lot of dig into. There are degrees. If you like De Palma, you’ll love it. If you don’t know De Palma, I think you’ll probably be interested in watching some of these movies after. If you don’t like movies? You might be interested in Brian De Palma, he’s a really interesting guy. He doesn’t hold back. Is that enough to make it a movie that everyone will go see? I hope so. He’s just so compelling.

Where did you get the footage of the original ending for Snake Eyes? I’d wanted to see that for ages.

Oh…well that was some Woodward and Berstein stuff. I can’t reveal my sources.

Do you have a favourite De Palma film or perhaps some overlooked movies in his catalogue that you wish got more attention?

Oh sure. Well, Phantom Of The Paradise. Luckily that’s gotten a bit of a cult following in some circles, but most people don’t have any idea of what it even is. I don’t even know how well people know Sisters beyond De Palma fans and that’s a masterpiece and an example of someone taking a film technique and applying it in the best way that technique could be used. I love them all, really. I mean, Blow Out might be the masterpiece if you can only choose one. That one has one of the top five endings ever. There’s Casablanca and four others and Blow Out is definitely one of them.

It feels like the De Palma-est movie as well.

Yeah, absolutely. It really does. Although the one that’s been on my mind a lot lately is Carlito’s Way which is a great expression of De Palma as the elder statesman and the master artist who takes all of his techniques and uses them to construct a very emotional tragedy. So that’s spectacular as well…but we love all of them, obviously. 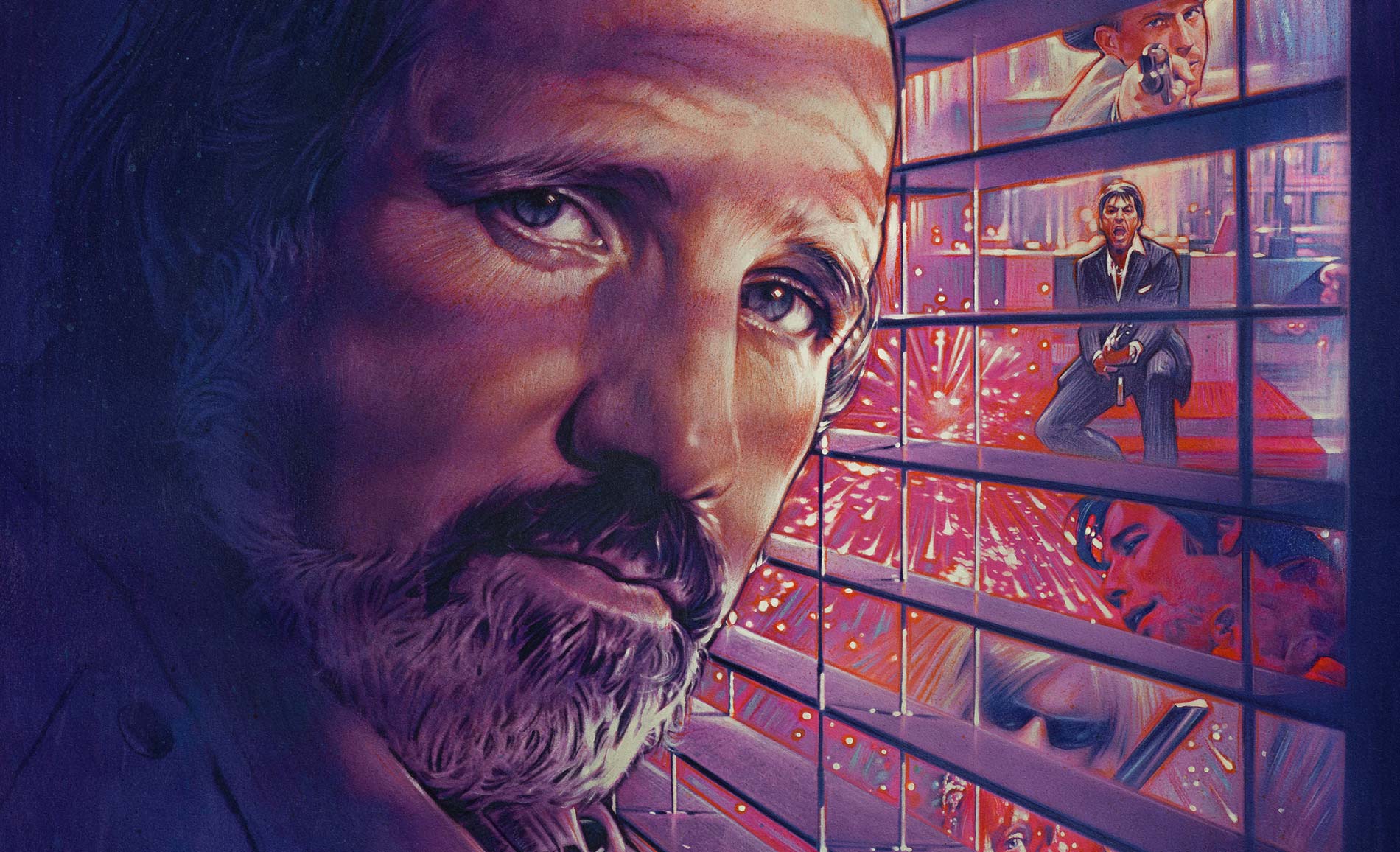 In many ways the movie feels like an extension of the Hitchcock/Truffaut interview. Does Brian appreciate that?

Yeah, definitely. When Noah and I decided to do this we both reread that book and Bogdanovich’s books on John Ford and Orson Welles. That Hitchcock/Truffaut one is so great because nobody was really interested in what Hitchcock was interested in at the time, so when Truffaut opened him up it was like a volcano. Suddenly there was this master filmmaker who was probably saying things to Hitchcock about his movies that were surprising to him.

Is there any other filmmaker who you’d like to give this treatment to?

We would like to do some more. The challenge is that we were friends with Brian and that will be hard to recreate. We have some ideas of other people who we could speak to. But the challenge is finding people who are willing and trusting enough to submit to it. That’s the tricky thing. In a way, this movie might help as a calling card.

Was it tough not to include a bunch of split screen while you were editing?

(Laughs) Yes, but as Brian said, “it’s not good for action.”