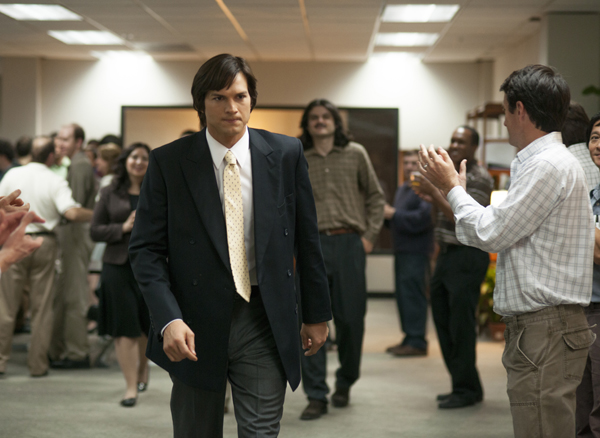 There’s no possible way that Jobs could actually be a biopic because the film based around its real life inspiration comes off as so inhuman that it’s patently ludicrous. Those looking for a deeper look at how the late Apple cofounder Steve Jobs defied all odds to become one of the most recognizable names in technological innovation will get nothing more than a bombastic, laughable, and embarrassing hagiography whose only character notes just serve to show just how much of a contemptible jerk its subject is. It’s so lousy it made me never want to go near an iAnything ever again.

Starting back in 1974 when he was a barefoot, acid dropping, higher learning sceptic that would readily cheat on his girlfriend, Jobs traces the life of its subject (played by Ashton Kutcher) almost back to his roots. Not that there’s ever a trace of who Steve was before this aside from coming back to start Apple out of his parents’ garage, though. After a successful stint at Atari where he wasn’t particularly well liked for his propensity to always bark at people on his same pay grade that they don’t know how to do their jobs, he gets inspired by Steve Wozniak (Josh Gad) and they decide to create the first serious company devoted to making a sustainable market for home computers. As the company gets bigger, Steve’s ego begins to clash with anyone and everyone he comes in contact with.

The film doesn’t so much stumble out of the starting blocks as it falls off a cliff, opening with the unveiling of the iPod (replete with Kutcher in unconvincing old man make-up getting filmed from as far back as possible) that looks like a cut scene from Walk Hard instead of the start to a serious biopic. The slow motion sequence of people applauding Jobs as he walks down a concrete hallway to deliver a stock speech that’s been stripped of any real personality or meaning sadly sets the tone for everything that’s about to follow.

From a run in with a kindly professor who urges him to keep learning (James Woods in a single scene that appears to have been cut down considerably) to one of the goofiest scenes of people tripping on acid, director Joshua Michael Stern (Swing Vote) and first time screenwriter Matt Whiteley portray Jobs quite unfairly as someone who kind of bumbled and swindled his way to success. Aside from business savvy and the ability to give orders, everyone else seems to do all of the thinking for him. And yet, the film totally wants to have it both ways by giving Jobs over the top inspirational speeches set to swelling music once every five minutes. It’s the kind of movie where when Jobs lands a major $90,000 investment in Apple, it cuts to him dumping his pregnant girlfriend and disavowing that the kid could ever be his, before going right back to ignoring what just happened because Apple was just so damned cool and outside the box when they started.

None of this is the fault of Kutcher or any of the cast, especially Gad and Dermot Mulroney as Apple’s first real benefactor. They simply have nothing to work with, and anything that could have seemingly humanized the story seems to have been excised from a production that already runs unconscionably long as it is. Kutcher really isn’t a bad choice to play Steve Jobs. He’s a smart guy who can play arrogant and who knows a lot about technology outside of the cinematic world. In short, Ashton Kutcher is almost too good for this material. Gad’s loveable and soft spoken Wozniak should be the rock that grounds the flighty Jobs, but he’s largely forgotten about for huge chunks of the movie until he disappears entirely after a scene where he just up and says he’s leaving.

Perhaps most frustrating is that when the film has a chance to actually give Jobs a human arc – something that would make him remotely relateable, vulnerable, and even the slightest bit likeable – the film skips over it entirely thinking that the audience already knows enough. It literally comes to a point where Apple is tanking, Jobs gets let go by the new CEO he helped to hire (played by an underused Matthew Modine, who’s hired in a woefully miscalculated “let’s hire a CEO” montage of all things), and then it cuts to the late 90s and all of a sudden he’s back together with the woman he abandoned and gardening.

There is zero excuse for this. It’s as incompetent as storytelling gets. For Steve to get any sort of empathy from the audience we actually need to SEE how he became humble and how he was able to reconcile with the fact that he was an incredible jerk before this point. I hate to spoil movies, but Steve Jobs is a public figure who had his life chronicled numerous times, and if a film is going to go out of its way to only show what it thinks are worthy highlights without ever getting to the actual heart and ethos of the person and why the resurrected a dying brand and were able to change the technological landscape we all know for the better is flat out insulting.

Then, perhaps most paradoxically of all, the film just ends pretty much out of nowhere just around the time the iMac was due to drop. The film clearly opens with talk of the iPod. Kutcher is made up to look like Jobs did towards the end of his life, greying and with a beard like you can see on the poster. At the film’s end in 1999 or so, he still looks like everyday Ashton Kutcher except with a different pair of glasses on. It never even gets to his greatest achievements, so what’s the point of any of this in the first place?

Steve Jobs deserves a better movie than this. Everyone involved deserves a better movie than this except for maybe the people who rushed it into production following Jobs’ sad passing several years ago. There has to be at least 30 minutes of film that was excised somewhere along the line, and while I would love to see where that footage or pages of the script went, I can’t say that I’m in that much of a rush to revisit this one.