It’s hard to believe that the guy behind the new Jungle Book film is the same actor/writer who got his start in talkie indie films like Swingers and Made. Jon Favreau graduated from indie guy to blockbuster director with the success of the first Iron Man film, but at least Iron Man balanced the witty rapid fire dialogue Favreau cut his teeth on with all the special effects and action.

The new Jungle Book is technically a live action film, but when you realize that 90% of what you’re seeing was created in a computer, it barely qualifies as live action. The environment and animals that Mowgli interacts with are completely convincing and beautiful to look at, but while the visual treatment is The Jungle Book‘s biggest accomplishment, it also turns out to be more spectacle than special.

It’s a story that we’ve come to know well through various adaptations of Rudyard Kipling’s original stories. This iteration primarily takes its cues from the classic 1967 Disney animated film, which is a simplified children’s story about a boy raised by wolves coming to age in a jungle that’s somewhat divided about the young man’s place there. They’ve scrapped most of the songs, keeping only “I Wanna Be Like You” (sung by Christopher Walken as an enormous King Louie) and of course, “The Bare Necessities”. With only two songs, it’s barely a musical. It would have made more sense to omit King Louie’s number along with the others and just stick with the Bare Necessities. 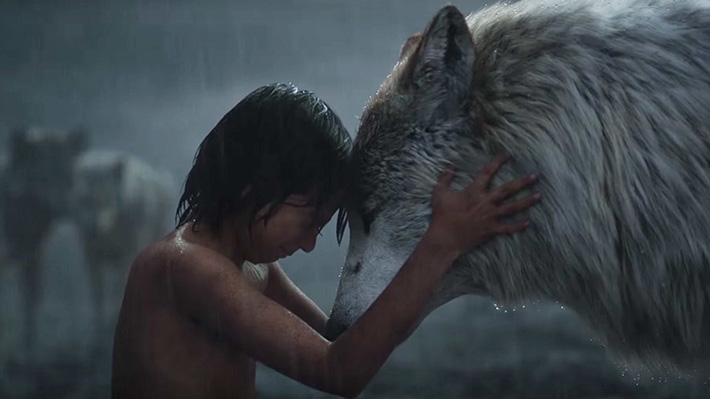 In addition to the beautiful CG-enhanced cinematography, there’s gold to be found in the voice performances. Idris Elba treats us to the second of his three voice performances for Disney this year (he also plays prominent roles in Zootopia and Finding Dory) as villain Shere Khan. Accompanying him is Ben Kingsley as Bagheera, Lupita Nyong’o as Raksha, Scarlett Johansson as cobra Kaa, and Bill Murray stealing the show as the loveable bear Baloo. On a bitter sweet note, the recognizable voice of the late Garry Shandling makes a memorable cameo as a possessive porcupine. Newcomer Neel Sethi does an admirable job as the only human in the film, particularly when you consider that it’s his first film and he’s expected to carry it while playing off of puppets and stand-ins.

Disney delivers on its promise of a live action Jungle Book, nothing more, nothing less. Not enough can be said about its brilliant visual treatment, which really overshadows the rest. You can see particular attention was paid to the way light interacts with the jungle at different times of day, which legendary cinematographer Bill Pope (Army of Darkness, The Matrix) surely deserves most of the credit for. This probably won’t impress the film’s intended younger audience, but I was so blown away by the look of the film that it was almost distracting. Try as it might, the highly technical film never quite connects on an emotional level. (*Minor spoiler ahead*) The theatre barely seemed to react when Shere Khan violently killed patriarch Akela, an act that should shock but is eclipsed by the picturesque setting sun it plays out in front of.

The Jungle Book delivers moments of sheer joy (Mowgli riding Baloo down the stream) and laughter (often from small animals with smaller roles), while also giving some good jump scares. It may be little too intense for the really young ones, but it’s sure to find its audience in 8-12 year olds and adults nostalgic for the animated film. It doesn’t have much to offer in the narrative department, but it more than makes up for it with its technical achievements.