From the logline, you’d expect the documentary Kung Fu Elliot to be a north of the border spin on American Movie with a little amateur karate tossed in for added hilarity. Indeed when we meet the titular Elliot “White  Lightning” Scott, he’s an overly enthusiastic indie filmmaker touting himself as “Canada’s Jackie Chan.” Granted, what we see of his movies looks like absolute garbage, but the guy sure is charmingly enthusiastic and has a certain skill with unintentional comedy.

Toss in a bitter and bored girlfriend, a sad sack best friend with dreams of becoming the next De Niro, and an ill-fated trip to China, and you’ve got yourself a docu-romp that keeps raising the crazy bar with every passing sequence. It’s the type of movie that toes the line between “laughing with” and “laughing at” its subject. At least, that’s the direction the film seems to be going at first. Somewhere around the halfway point, things change dramatically, and Kung Fu Elliot is a far more interesting movie for it. 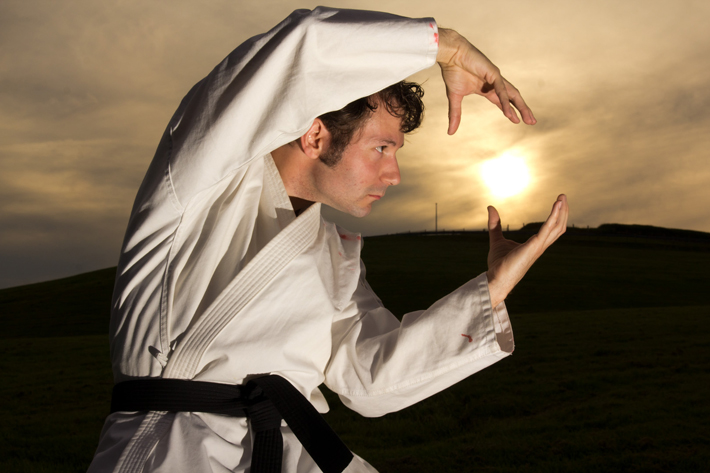 The longer that co-directors Matthew Bauckman and Jaret Belliveau stay with their subject, it becomes more increasingly clear that Elliot’s compulsive lying and delusions are more dangerous and depressing than funny. The film turns dark (but still uncomfortably funny), and Elliot’s dance of deception loses its charm rather quickly.

It’s a documentary character study that lands somewhere between charming comedy and unsettling psychodrama. While making the movie was undoubtedly a bit of a trial for Baukman and Belliveau, they emerged with a brilliant bit of work that deserves wider distribution if only to smoke Elliot Scott out of his cave, so that guy can attempt to explain what the hell is going on in that soft brain of his.