You probably recognize Amber Benson from her three-season stint playing Willow’s witchy girlfriend, Tara Maclay, on Buffy the Vampire Slayer. If you don’t, stop reading this article immediately and go watch all seven seasons of Buffy. But what you might not know about Benson is that in the years since her Whedon days, she’s become a prolific creator of film, television, webseries, novels, and of course, comic books!

Benson, an avid reader whose most-loved authors include Ray Bradbury, J. K. Rowling, and Susan Cooper, began creating a Willow and Tara comic while Buffy was still on the air, tackling a subject which was groundbreaking in media at the time (Wicca! Just kidding). Collaborating in 2001 with another of her favourite writers, Christopher Golden, along with Terry Moore and Dark Horse’s Eric Powell, Benson helped create the “WannaBlessedBe” one-shot set during the fifth season of Buffy, about a powerful girl who becomes jealous of Willow and Tara’s relationship. Benson and Golden followed up in 2002 with the Willow and Tara “Wilderness” two-issue limited series, with help from Dark Horse’s Ajit Jothikaumar, in which Willow, Tara, and Dawn look into the mysterious appearance of possessed forest animals.

Though initially nervous about writing Tara’s dialogue, Benson relied on Golden to make sure her character’s voice sounded authentic, and was thrilled with the final comics. “They’re real women, too, which was nice,” Benson said about Moore’s art for her Willow and Tara series. “They have real bodies. They’re not, like, skinny, anorexic-looking characters, which drive me nuts. Willow and Tara, the comics, look beautiful and real.”

With the success of the Willow and Tara series, Benson and artist Ted Naifeh contributed a story to the Tales of the Slayers graphic novel called “The Innocent,” about a French Revolution-era Slayer named Claudine who is tricked by her Watcher (and lover) into killing a Parisian aristocrat. After a brief break from comics, Benson joined forces with Jamie McKelvie and Image Comics to pen the “Loss” story for Image’s Four Letter Worlds Collection in 2005. The following year, Benson and artist Ben Templesmith created “Demon Father John’s Pinwheel Blues” for IDW’s Shawdowplay, focusing on a syndicate of vampire street-children. 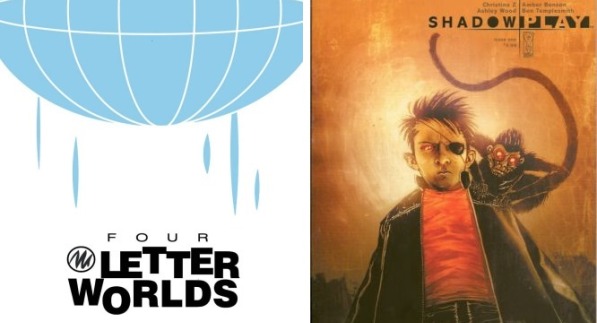 Far from limiting herself, Benson is the awesomest queen of multi-tasking I’ve ever come across. She’s directed, produced, and starred in her films Chance and Lovers, Liars & Lunatics, and co-directed Drones, she’s produced a play entitled Albert Hall in Hollywood, she’s collaborated again with Christopher Golden to produce a series of animated feature films for the BBC called Ghosts of Albion — which they have since turned into supernatural thriller novels — and, she’s starred on Supernatural and Husbands. Most recently, Benson has penned a five-novel series for Penguin Books called Death’s Daughter, about a teen girl named Calliope Reaper-Jones who is forced to take over the family business (spoiler, it’s death).

If you want to keep track of Benson’s contributions to the world (or pester her about creating a Calliope comic series – I’m just saying), you can find her on Twitter, YouTube, Facebook, or on her blog. Oh, and if you need to borrow the Buffy boxset, I’ve got you covered.