Life of Pi Review - That Shelf Skip to main content 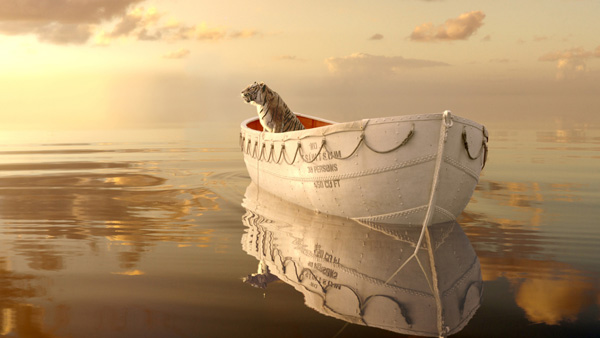 If nothing else, you’ve got to give director Ang Lee credit for variance in his career. Who else could have done both The Ice Storm and Hulk or Crouching Tiger, Hidden Dragon and Sense and Sensibility? The only thing that links his movies is the impeccable craftsmanship, the floating/observational visual style, the lovingly humanist approach to characterization, and the desire to make even the broadest spectacle personal or the smallest niche story universal. Sure, there have been stumbling blocks along the way (the less said about Taking Woodstock the better and even as an admirer of what he attempted with Hulk, I can’t deny it’s misconceived and batty), but Lee has quietly put together one of the more consistently impressive directing careers of his generation and somehow seems just as content choreographing flying sword fights in trees as he is gently turning the screws on a chamber drama.

Lee may have at first seemed like unexpected choice to take on Yann Martel’s award-winning best seller Life Of Pi, but given that unexpected choices seem to define his career it’s oddly appropriate. Lee’s version of the film should please fans of the book and newcomers alike, a grand sweeping man vs. nature epic with a soft gooey center. It might not be his finest achievement as a director, but Lee contributing business as usual to a beloved novel should be enough to pile up cash and awards nominations. Thank god M. Night Shyamalan didn’t get his hands on this as planned… I shudder at the thought, even if Bruce Willis could use the work.

If you haven’t read the book and are ashamed to admit such a thing in public, here’s a little plot summary to help you out of a social awkward situation. It’s quite simple: A wrap around narrative has the older Pi (Irrfan Khan) telling a harrowing true life story which he promises will make any listener believe in god. As a teen (Suraj Sharma) Pi attempted to immigrate with his parents from India to Canada. His father was a zookeeper and planned to bring all the animals with him, so the trip would be by boat with a cornucopia of exotic creatures in the hull. Of course, the successful transportation of a zoo across the ocean isn’t exactly the stuff of compelling storytelling (well, maybe if you’re Cameron Crowe these days), so a storm hits and the boat sinks. Pi is the only survivor, crowding onto a cramped lifeboat with only two unexpected shipmates: an orangutan and a tiger. As you can imagine, the ape and the beast don’t get along, so soon the boat is shared by just Pi and the jungle cat. That’s a sticky situation and Pi soon finds himself building a make-shift second raft and struggling to find some sort of even relationship with his carnivorous partner as they slowly, hopefully, float their way to dry land.

So despite the inevitable spiritual parables and “strength of the human spirit” messages, this is at its heart a ripping yarn of an adventure. Pi is a Robinson Crusoe adventurer, a lost soul seeking spiritual guidance, and teen looking to come of age all in one and luckily for him he’s been shoved into a quest that will solve all of his inner problems. That mixture of external adventure and inner turmoil is somewhat of an Ang Lee specialty and he never lets one aspect of the story outweigh the other.

On a technical level, he shoots the film in grand blockbuster fashion. The CGI employed in the storm sequences and to create the animals is nothing short of amazing. Sure, it’s not like you’ll ever mistake a CGI Tiger or ocean for the real thing, but the fairy tale adventure nature of the story suits that level of stylization. It’s very clear we’re watching a parable here and Lee is wise enough to indulge in the stylization that traditional brand of storytelling needs. This type of movie isn’t representing reality (in fact… no, that’s too big of a spoiler), so Lee and his team of VFX wizards create a heightened world linked to our own only through the general design and physics. There characterization of the CGI animals is undeniably impressive. The Tiger is afterall the second most important character in the movie, so fully believing the creature’s behavior was vital and Lee’s crew nailed it.

The film is also in 3D and while that add-on has caused many folks to cry foul while in the ticket line lately, Life Of Pi proves that when a talented visual stylist uses it as an artistic tool rather than a box-office boosting afterthought, 3D can still add to a cinematic experience. Lee cleverly shrinks his aspect ratio in key scenes to literally send creatures flying off of the screen in 3D and is always careful to compose his images with depth in mind. It’s a feast for the eyes on par with any summer blockbuster. Lee has lovingly crafted the central narrative as a crowd-pleasing showman and yet without ignoring the aspects of the book that dig beneath the surface.

Tossing labels and meanings onto Life Of Pi verges into spoiler territory that feels unfair. So, let’s just say this is one of those adventure-as-metaphor-for-the-challenges-of-life tales and leave it at that. Lee sensitively pulls the themes out of the text and finds ways to express them visually as well as through words without ever becoming too heavy handed (some of that is inevitable with that sort of thing). He’s also careful to keep his adventure locked in on the human core of Pi. As the teen version Suraj Sharma gives a performance so good that it will probably be overlooked. To explain, there isn’t a moment on the quest where Sharma doesn’t come off as entirely natural and believable and yet to pull this movie off there’s no doubt that at least 90 percent of his scenes were shot alone in a water tank and/or in front of a blue screen. Trying to create such a vivid emotional and physical journey under those conditions would have been no easy task, but you wouldn’t know it watching Sharma who never draws unnecessary attention to himself or his performance. Some credit should go to Lee who obviously has an impressive track record working with actors and he also gets some strong work out of Irrfan Khan, who for the most part has a fairly thankless task of narrating the film, but Lee is kind enough to give him a couple of moments to deliver the goods.

Life Of Pi is an undeniably impressive film-going experience that delivers both the visceral thrills and subtler joys to be found in any great movie. To pretend it’s perfect would be unfair though. As grounded as Lee and his cast try make the story, there’s no denying that this is a stylized allegorical fantasy with all of the potential audience alienation that implies. It’s also about as shamelessly manipulative and painfully sincere as movies get. Despite the grand life-affirming themes it’s also a fairly simple and pat experience when boiled down to the core. Inevitably all of these things will irritate plenty of viewers and prevent Life Of Pi from easy classification of being the best film of the year or even one of the best of Lee’s career. But that said, it will be hard to ponder these flaws to closely while being swept up in Lee’s remarkable adventure.

It’s fairly easy to cast cynicism aside for the running time and appreciate the film as piece of joyous entertainment, if nothing else. If the themes resonate with you in addition to the spectacle, then it’s a remarkable work of cinema. Even if that doesn’t happen, the film is worth seeing for the visceral viewing experience alone. If nothing else, at least this movie has more meat on its bones than Avatar along with a more mature, yet similar transportative effect. Sure, Life Of Pi isn’t an instant timeless masterpiece, but it is one of the most purely absorbing cinematic experiences of 2012 and that’s enough. Who knows what Ang Lee has planned next, but clearly it’ll be another big screen journey worth taking… well, as long as it isn’t a trip to Woodstock.