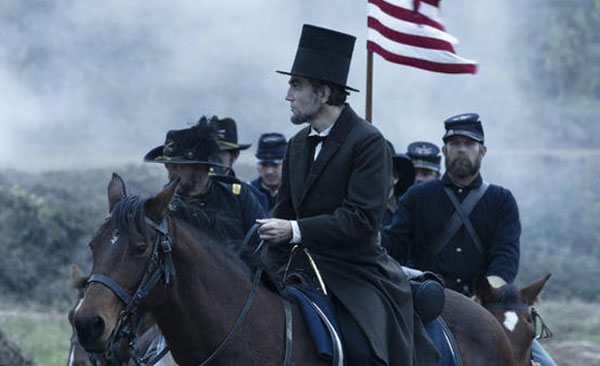 With the possible exceptions of Schindler’s List, Munich, and all but the last five minutes of Saving Private Ryan, Steven Spielberg has never been known for subtlety or restraint when it comes to his historical epics. His desires to be a crowd pleaser and masterful showman often lead to over the top, sentimental portrayals of historical events that might be entertaining, but often do a disservice to the actual history he’s trying to convey. Lincoln might not be an exception to the rule, but it’s actually a pitch perfect melding of Spielberg’s sentimentality and schmaltz with actual high quality filmmaking. It’s probably the kind of historical epic he should have been making the whole time.

Picking up in the life of the famed American Civil War era president shortly after his narrow 1865 re-election, we find Abraham Lincoln (Daniel Day Lewis) elbow deep in trying to pass the 13th amendment to the constitution to abolish slavery before the end of the war. He could just wait for one final assault to put the final nail in the coffin of the confederacy, but trying to pass the amendment after the rejoining of the union would prove impossible.

The film focuses almost exclusively on this one task and never wavers from the main point. Re-teaming with Munich screenwriter and playwright Tony Kushner, Spielberg recaptures the no bullshit, task based essence of that production. It never tries to really show a grand portrait of Lincoln from his birth to his death, and Spielberg and Kushner still resort to some sometimes standard speechifying, but for once Spielberg’s sentimental streak works wonderfully hand in hand with the material to make a genuinely human and loving portrait of a beloved political figure.

Almost on screen for the entire running time of the film, Daniel Day Lewis (aided by some truly spot-on prosthetic make-up) gives another incredible performance in an already phenomenal career. Much like the work of Meryl Streep, it’s quite unsurprising he always turns in consistently excellent work, but he might be a better judge of material than Streep. Here, in between some expository dialogue straight out of the history books. In one of the best turns from one of the best actors of our generation, Lewis plays The Great Emancipator not as a man consumed by darkness, but by stress. He’s a consummate politician who knows he might have to employ some underhanded, not-so-honest-Abe tricks to restore the country to its former glory.

The film’s focus on wheeling and dealing makes a nice parallel between Spielberg’s film and those made by George Clooney and company in recent years. It’s also where the film’s incredibly and sadly overly stacked cast comes in. Everyone does such a great job, but naming them all would take far too long, and for the most part, their roles are sometimes thankless. Tommy Lee Jones gets the film’s most Oscar-worthy moments outside of the lead as a radical abolitionist torn between forwarding his beliefs and calling bullshit on Lincoln possibly softening the definition of what makes a free man in the future. Also stealing every scene they are in are John Hawkes and James Spader as a pair of lobbyists assigned to procure and persuade votes from the (then) evil democrats by any means necessary.

The fact that every major and minor role in the film comes at the expense of wasting some great talent in thankless roles provides the film with its only major demerit. Sally Field does a great job as Mary Todd Lincoln, and the backstory about one of their children dying adds some genuine punch without seeming overstuffed, but her role feels needlessly bulked up to give her things to do. Faring far worse (but not in a bad performance way) is Joseph Gordon-Levitt as Abe’s eldest son who wants to drop school and join the army. He has such a static and stock role that his limited screen time feels more like a distraction than any real addition. Ditto Hal Holbrook as one of his closest advisors, and sadly David Strathairn as chief of staff and former Lincoln rival Henry Sewell; a man who says a lot, but never gets to do anything of substance aside from glowering at his boss.

But given how strong and how well the film works thematically, the stunt casting doesn’t sink the movie. In many ways, Spielberg is working with the same sort of nostalgic pastiche that he did last year with War Horse, but unlike that film’s hokey Richard Curtis penned script that bounced between several emotionally schizophrenic storylines, Spielberg stays the course here, delivering a film that moves at a much faster pace than his previous epic effort despite being even longer. He places the film’s main character firmly in a specific point in history and he bothers to give him a true sense of humanity to make the audience care about the man and his efforts without fully lionizing him. It could stand some trimming here and there, and the casting is too epic for its own good, but none of that takes away from Lincoln being Spielberg’s best historical drama to date.