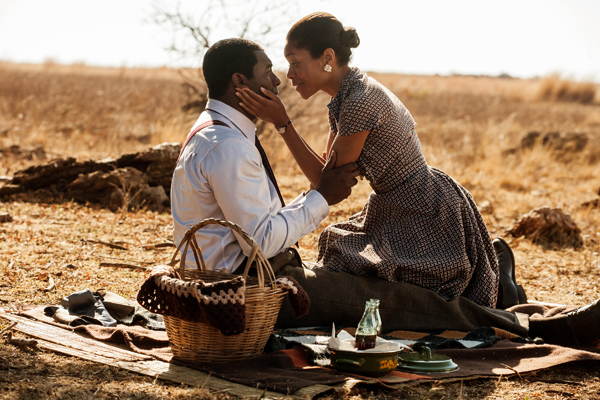 It’s a shame that in the year of Nelson Mandela’s death the best tribute anyone has been able to come up with outside of some really thoughtfully written pieces by those who knew the South African civil rights leader best is Justin Chadwick’s biopic, Mandela: Long Walk to Freedom. Granted it was made well before Mandela passed away, and while not necessarily a bad film or one that does a disservice to the man’s legacy, it’s just a rather inert bit of filmmaking. There are several admirable qualities to Chadwick’s work and the always exceptional Idris Elba gives an outstanding leading performance, but this film also suffers from an identity crisis. It can’t decide if it wants to be exhaustively comprehensive with its facts or if it wants to take a closer look at Mandela’s actual psychology and personality.

Picking up in 1942 with Mandela as a lawyer practicing in a system where most of his cases get dismissed because white witnesses refuse to talk to a black lawyer, and ending just after his release from a life sentence imprisonment in 1990 for his role as a leader in the ANC, Long Walk to Freedom certainly covers a lot of ground without ever once going into the man’s upbringing or his time as South African president. Telling things largely from Mandela’s perspective – occasionally from the viewpoint of ex-wife Winnie Mandela (Naomie Harris, in a nice, understated and refined turn) – Chadwick follows a pretty straightforward timeline with little room to go back and reminisce.

To Chadwick and screenwriter William Nicholson’s credit, they mine a lot of material from Mandela’s autobiography that doesn’t always portray the iconic politician as a perfect saint. He’s a womanizer, it’s sometimes questionable if he truly acted in his party’s best interests or he simply sold out, and he’s definitely looked upon as a hard headed tactician that was sometimes his own worst enemy. In this willingness to go beyond a simple bullet point presentation, Chadwick and Nicholson should be praised for even bothering when most films would have cut most of this material.

Still, the operative word in the film’s title is “long,” and 140 minutes there’s an uneasy balance between the historical aspects of Mandela’s life that everyone knows and the more colourful anecdotes that pop up every now and then. Both sides of the equation could stand to get cut because the focus of the film is unclear. Does Chadwick want us to understand Mandela as a person or his history? At times the film becomes so dryly academic that it suggests personality would never enter into the equation, while at other the history comes secondary to the melodrama (particularly late in the film when Nelson and Winnie begin to have marital problems).

But the real reason to see the film would be Elba, who with the help of some great prosthetic make-up literally disappears into his role. With a spot on accent and a different kind of swagger than roles he normally gets to play, it’s easy to forget that it’s even Elba playing Mandela. It’s an assured bit of mimicry in terms of appearance, but it’s doubtful that many other actors could have as accurately depicted the fire in Mandela’s belly and his constant presence in the fight for equality. It takes a man or great conviction to play someone as special as Nelson Mandela, and while Elba pulls it off, it’s just a shame the film around him doesn’t have the same focus that he brings to the project.