“And if one does what God does enough times, one will become as God is.”- Doctor Hannibal Lecktor

One of the definitive cult movies of the 80s and one of the most stylistically influential films of all time, Manhunter is beloved and iconic. So, it’s surprising that it took this long for the flick to get a definitive Blu-ray release. After a nearly endless series of DVDs that seemed to be released weekly, Manhunter only made it onto Blu-ray once before in a fairly tossed off MGM release as part of their Hannibal Lecter box set. Now Shout Factory have finally given the movie a release that its feverish fanbase will adore. Though undeniably dated, the flick retains its peculiarly hypnotic power all these years later and it’s easy to see why Mann’s breakout thriller left such a shadow on all the serial killer thrillers to follow.

Burned out detective specialist William Petersen (of future CSI fame) stars as a cop who’s particularly good at tracking down serial killers because he knows how to put himself into their cracked mindset. He’s been asked to help hunt a particularly vicious new killer who has been inappropriately named The Tooth Fairy (Tom Noonan). He’s wary of diving into the darkness again, but agrees and even consults with his ultimate nemesis Hannibal Lecktor (Brian Cox) to make it happen. That’s the basic set up, but it’s not really a plot driven movie. Michael Mann’s thriller is more about mood and style that slips under the skin and disturbs long after the credits roll.

Manhunter works best in its most visceral and character driven moments. The set pieces are iconic (particularly the oft-parodied “Do You See?” sequence), so meticulously constructed and lit that you can’t help but get lost in the unsettling style. Tom Noonan is also absolutely remarkable as the killer, finding a damaged humanity in a role that could have so easily have become cartoonish in a lesser actor’s hands. Somehow he is both heartbreaking and haunting and impossible to tear your eyes from anytime that he’s on screen. Brian Cox also provides a rather amusing and subdued edition of Hannibal Lecktor (the odd spelling was chosen for reasons known only to Mann, but at least it’s helped distinguish this version from Anthony Hopkins over the years). It’s a drastically different take on the role than most viewers are used to, but he works rather well in Mann’s more muted world (well…at least in terms of the acting).

While Michael Mann’s personal aesthetic is on full display and often jaw-dropping, the movie hasn’t aged well in some instances. Mann’s commitment to shooting exclusively in beauty shots makes the quiet early sequences feel comical before the craziness kicks off and some of his music video inspired sequences are laughably over the top. Peterson also has a tough time during his endless monologuing in a manner that may get snickers from all but the most devoted CSI fans. So, Manhunter isn’t exactly a perfect movie despite its reputation and also pales somewhat when held up to Jonathan Demme’s The Silence Of The Lambs since comparisons are pretty much unavoidable. Still, complaining about too much style in a Michael Mann movie is like complaining there are too many explosions in a Michael Bay movie or calling Steven Spielberg too sentimental. The excesses are part of the movie’s twisted charms and any of Mann’s every growing cult of cinephile obsessives should rank Manhunter near the very top of his slick career. If nothing else, Manhunter remains a unique cinematic experience despite all of the rip-offs, influences, and unofficial sequels to pop up over the last 30 years. That’s no accident and it’s likely the film will remain a cult favourite as long as people care about cult movies. 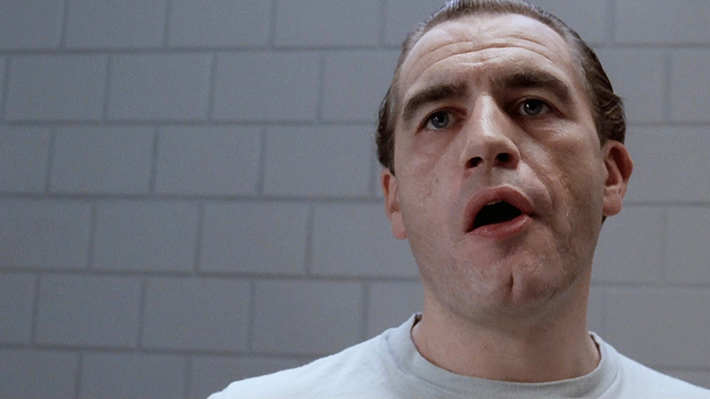 Unsurprisingly, the film looks absolutely beautiful on Shout’s new Blu-ray…for the most part. There are a handful of moments with some unsightly digital noise, but overall the film has never looked better. The stark lighting and rigid compositions are beautifully retained with vibrant colors and deep depth beneath the shadows. Given that the film is driven by visuals, this HD presentation heightens the impact of the film considerably and fans should be thrilled. That is of course unless they prefer the director’s cut. Unfortunately Shout was unable to restore the extra footage (which looked bad even on the late 90s Anchor Bay DVD given the rough state of the material), so you can either watch an HD version with Standard Def director’s cut footage slipped in or an SD version of the entire cut. Not exactly ideal, but to be honest that additional four minutes of footage adds very little and the theatrical cut is the better version. Either way, the new HD master audio track is gorgeous, so you can hear all the cheesy synth music in the best possible presentation whether you like it or not.

On the plus side, the special feature section more than makes up for the wonky director’s cut. First up, all of the material from Anchor Bay’s long lost DVD has been revived including a 10-minute chat with cinematographer Dante Spinotti, a brief 17-minute making-of doc with the cast, and a commentary track from Michael Mann himself. Unfortunately, Mann didn’t participate in any of the new features that Shout whipped up, so if you’re looking for any thoughts from the man himself (apologies for the pun), this is your only source. Thankfully, it’s a strong and engaged commentary track and if you really want to hear the director speak about his breakout feature, there’s always google.

All of that old material is on the troubled director’s cut disc. The new stuff pops up on the more satisfying theatrical disc and whoo-boy is there ever good stuff here. First up is a lengthy 40-minute interview with Brian Cox describing his approach to playing Hannibal Lecktor based on childhood nutters that he knew in Scotland and footage of serial killers, as well as his meticulous work with Michael Mann and why he didn’t end up in The Silence Of The Lambs. It’s an immensely interesting interview that kicks things off well. Next up comes a 35-minute interview with cinematographer Dante Spinotti that covers all of the inspirations and challenges behind the unique and immensely influential aesthetic that he created with Mann through Manhunter and their subsequent collaborations. Obviously, it’s a little dry and technical, but cinematography nuts should love every second of it. Composer Michel Rubini and all of the members of The Reds pop up to discuss the score for 42-minutes, which is a lively and amusing chat…but since I kind of hate the movie’s music I can’t pretend that I cared that much.

Finally, there are three new interviews with William Peterson, Joan Allen, and Tom Noonan that are about 15-20 minutes each. They all have their charms. Peterson has a nice “no bullshit” approach and doesn’t mind telling tales out of school about days that went on too long or went wrong. Allen is very sweet and has quite fond memories about her first major production, especially the day that she got to pet a live tiger. However, the best of the bunch is easily Noonan who has such strong memories about his unique approach and the effect it had on his cast mates and audiences (one anecdote about someone fleeing from him in a grocery store at top speed shortly after the film was released in a gem) that he’s a pleasure to listen too. Toss in some trailers and still galleries and if you’ve got a Manhunter Blu-ray so overflowing with content that it’s hard to imagine any fan of the film could complain. Sure, it would have been nice if Shout had somehow been able to spruce up the old director’s cut footage, but again that’s the inferior cut of the movie anyways. The fact that it’s included at all is a plus.

This is a damn fine disc from Shout Factory that should immediately find a place on Blu-ray aficionados shelves for adoring appreciation.