After nine exciting episodes, WandaVision wrapped up last week, leaving MCU fans with a massive void in their Friday night TV schedule. Marvel’s next series, The Falcon and the Winter Soldier, arrives next week, on March 19th, and Disney+ just dropped some new MCU content to fill the gap.

Marvel Studios: Assembled is a brand-new documentary series that “chronicles the creation of Marvel Studios’ thrilling new shows and theatrical releases. Assembled is an immersive and in-depth examination of the next phase of the MCU.” And the first episode, which is available right now, gives viewers an up-close look at the wonderfully weird world of WandaVision. Check out the trailer below.

For nine episodes, WandaVision unleashed its special brand of chaos magic on viewers. The program took the MCU’s proven storytelling style and warped it into something closer to what you find in the pages of an actual comic book. The program quickly won over a diehard audience through its thrilling, heartfelt, and devilishly playful style.

I’m the type of movie nerd who buys blu-rays for the special features and director commentaries, and most streaming services don’t bother with these enticing additions. So it’s exciting to see Disney+ keep adding content to nerd out over like director commentaries and docuseries. Now that WandaVision is over and can’t be spoiled, I’m looking forward to hearing all the behind-the-scenes stories, straight from the cast and crew.

The premiere episode of this groundbreaking series of documentary-style specials features Elizabeth Olsen, Paul Bettany and the creative team behind Marvel Studios’ “WandaVision” as they welcome viewers behind the scenes of their exciting series.

Learn how the production’s surprising concept took shape by drawing inspiration from classic sitcoms. Witness how the crew went to great lengths to emulate various filmmaking methods used during the early years of television. Discover the unique challenges and ultimate rewards of performing an entire episode in front of a live studio audience. Spend time with exciting newcomers to the MCU, including Teyonah Parris and Kathryn Hahn, along with returning favourites like Kat Dennings and Randall Park. “Assembled: The Making of ‘WandaVision’” is an all-encompassing look at Marvel Studios’ first, and arguably most unusual, streaming series.

Marvel Studios Assembled: The Making of WandaVision is currently available to stream on Disney+. 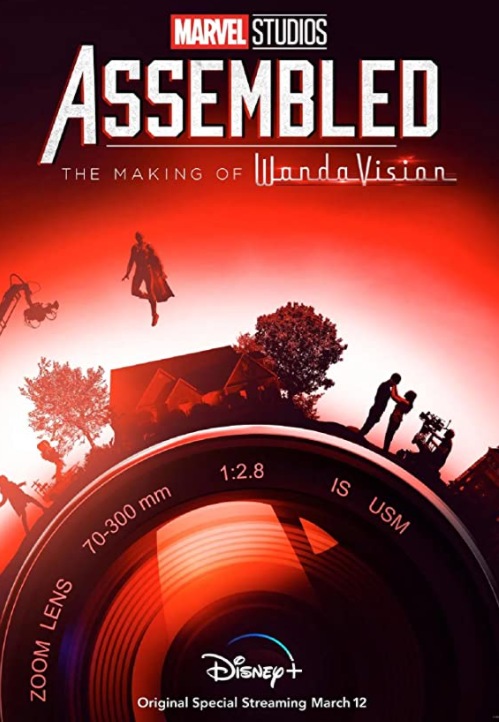