A cynical person would say: did we really need another Men in Black movie? Hasn’t the Will Smith franchise from the ‘\90s run its course? And they’d be right, except that while this movie takes place in the same universe, this is a reboot not a sequel; and the entire premise of the original film – a shadowy, secret government agency set up to hide alien refugees who encroach on American soil – has extra resonance today.

In the present day, the Men in Black organization has expanded to cover the world. We meet H (Chris Hemsworth), a top agent who has chosen to fight alien threats on solo missions, James Bond-style, after his former partner Agent T (Liam Neeson) – now High T, because puns – was promoted to lead the London division.

As in the 1997 film that spawned the franchise, we first enter the realm of the MiB through the eyes of a civilian: Molly (Tessa Thompson) witnessed an alien enter her home as a young girl and saw her parents’ memories wiped by MiB agents; though she escaped with her memory intact, she’s spent her life since using her precocious detecting skills to discover the truth about the agency. It doesn’t take long before she’s recruited (well, allowed in) and partnered with Agent H, because really, isn’t the point of this movie to get Tessa Thompson and Chris Hemsworth together again so they can recreate the sparky chemistry they showed us in Thor: Ragnarok?

Sadly, their first encounter is monumentally disappointing, as the film takes a hard wrong turn by making Agent M lust after Agent H, who swaggers into HQ in slow-mo like a model in an ad for overpriced cologne.

Don’t get me wrong. I’m all for letting the lens act like the hetero female gaze for a change. Lord knows it’s time after decades of lovingly long tracking shots of female bodies. But I think the moviemakers forgot that Thompson is best when she’s cocky and confident, not swoonily crushing like a fangirl, and Hemsworth is best when he’s a brute force bumbler with a heart of gold and is allowed to show his prodigious comedic chops.

Happily, the duo revert to their usual rhythm not long after that misstep, and it’s their edgy banter that rescues the sagging middle of this film. Please give Thompson more chances to gently neg Hemsworth, and him more opportunities to earnestly try, and fail, to save the day on his own! These two are so good together as partners and friends, it makes the very thought of them as a romantic couple seem just… wrong. 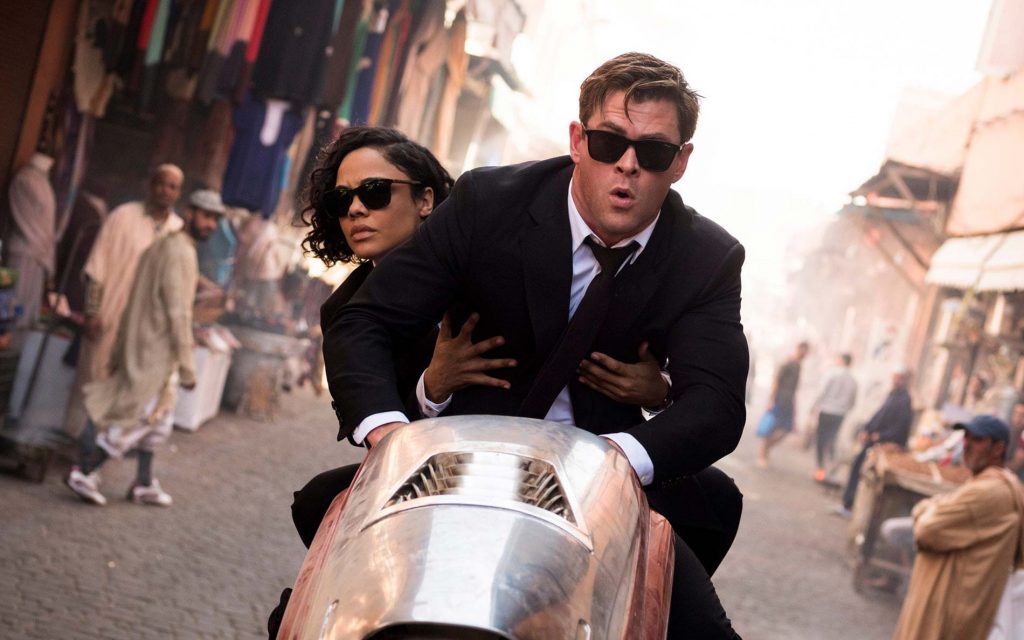 Anyway. It’s not a spoiler by any stretch to say that the main plot hinges on an alien threat to Earth which our heroes must avert, and that there are battles with Big Bads along the way, culminating in a Final Boss that gives lip service to emotional resonance, but ultimately is just a fight scene devoid of drama or feeling (or really, much suspense). Naturally, aliens abound throughout; most of them are imaginatively rendered in CGI and look extremely, almost distractingly cool, though there is one named alien that is disappointingly realized using primarily just one bad wig. I mean, c’mon, movie, do better.

It’s especially glaring to see a lazily realized alien when the real star of the film is Kumail Nanjiani voicing an entirely CGI alien called Pawny. He is at his hilarious best here, playing a heroic beta who manages to hold his own against the two main stars. He’s the character who all the kids will love and I look forward to buying the Funko Pop figurine.

And while we’re on the topic of laziness… I can’t shake the feeling that while this movie is an enjoyable ride, it could have been more than that. The franchise is built around the idea that civilizations exist on other worlds, and not only are they in regular contact with our own, there is common traffic and trade that must be managed and kept under wraps from society at large. There’s a lot that could be unpacked within that, and they could have made a wonderful parable about the ongoing worldwide refugee crisis. Alternatively, there’s emotional drama that could be wrung from the often tossed-aside point that in order to join the MiB you must give up all contact with the outside, including your very name.

But instead, we got a simple us vs. them narrative, fuelled by CGI action and a paper-thin plot that dissolves if you look at it too closely. Which is fine. It’s fine! But it could have been so much more. And I can’t help wishing I’d seen the movie that could have been, instead of this one.