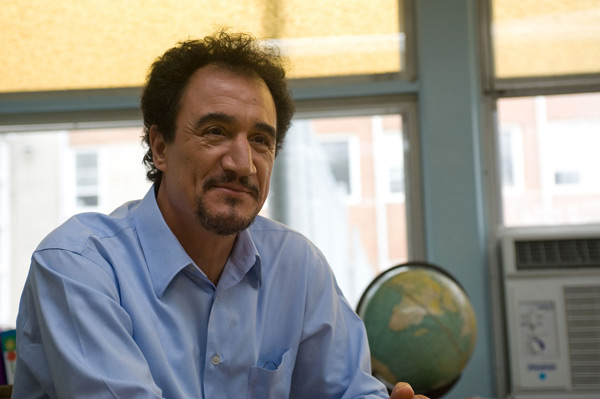 While the wonderful and tense Iranian film A Separation has been gaining a lot of buzz South of the Border as the front runner for this year’s Best Foreign Film at the Academy Awards, Canadians have been abuzz that one of their own has made its way to a nomination on film’s grandest stage, and rightfully so. Director Philippe Falardeau’s Monsieur Lazhar takes the well worn template of an inspirational teacher movie and creates something far grander out of a type of film that often lends itself to grandstanding and speeches. It’s a heartrending look at a community struggling with a great loss where the man with the will to help happens to be in over his head.

Following the tragic and horrific suicide of a Montreal elementary school teacher during recess, the staff are struggling with not only how to grieve, but also questions of blame, the degree to which they need to coddle the shell shocked children, and ultimately, replacement, not just of the teacher, but of pretty much everything in the room that could bring about mournful thoughts. Into the school’s life comes Bachir (Fellag), an Algerian refugee who claims to have a teaching background and who knows all too well what it feels like to lose a loved one. Taking on an already tenuous role as a substitute teacher, Bachir at times seems out of place amidst his surroundings by assigning them homework far above their reading levels, but it’s his past that allows him to connect to the class and especially the two children most affected by their teacher’s passing.

Based on a one-man stage play by Evelyne de la Cheneliere, Falardeau crafts an elegiac, yet hopeful look at the healing process. Set against a beautifully realized Montreal winter, the location is certainly idyllic to look at, but Falardeau makes it known from the early going that no amount of snow or fresh paint can cover up sadness. Taking posters down in a classroom and relegating them to the boiler room only adds to the feeling that the school harbours a dark secret.

As Bachir, Fellag displays not a quiet intensity, but a nurtured understanding combined with a different cultural upbringing. Through his interactions with colleagues, some disastrous parent-teacher conferences, and his head butting with the school’s chief administrator (a powerful Danielle Proulx, matching her masterful work in Jean-Marc Vallee’s C.R.A.Z.Y.), Fellag struggles to show Bachir’s affable understanding of his new culture through forced smiles and curt body language. It’s a far more physical performance that it probably reads on paper.

The heart of the film, however, belongs to young Alice and Simon (Sophie Nellisse and Emilien Neron) as the two classmates and former best friends that now argue constantly because of the role Simon seemingly played in their teacher’s suicide. It’s through these wonderful child actors (directed with extreme care by Falardeau to make sure they never come across as precocious “little adults”), that the film dares to look at the selfish nature of suicide and the scarring it can leave behind. This B-plot manages to be every bit as engrossing and emotional as Bachir’s soul searching. When they plots converge at the end, the film becomes a real thing of beauty.

Monsieur Lazhar is every bit worthy of its Academy nod as it’s one of the year’s most humanist tales. There isn’t a single false note to be found and not a single unbelievable moment. It’s the rare film that’s as uncomfortable as watching a real life tragedy and as nurturing as hug. Not only is this a great film, it’s a great experience.