Microtransactions have become an accepted part of the gaming landscape in the mobile era, but games like Farmville and Candy Crush Saga have ensured that many people associate them with the most exploitative aspects of corporate culture.

So leave it to Nintendo to explain microtransactions in the most straightforward and adorable way imaginable. Kotaku’s Stephen Totilo has posted a series of screenshots from Nintendo Badge Arcade, a new-to-North-America pay-to-play 3DS app/game in which a cartoon bunny helpfully explains why Nintendo needs your support to keep the lights on above the crane machine. He even has the decency to feel sorry about asking, though not so bad that he’s going to turn down any of the money you want to give him.

I haven’t played Nintendo Badge Arcade so I have no idea whether or not five plays are worth $1.00. However, it is a good example of why Nintendo continues to be one of the most beloved game publishers in the business. Instead of building an obtuse Skinner box to obfuscate the amount of money you’d be spending, Nintendo makes an effort to speak with its fans in an open, honest manner that respects its customers’ right to make informed decisions. Nintendo trusts its audience so much that it believes fans will voluntarily choose to spend real money when presented with the option.

That kind of integrity is all too rare in a marketplace that can often feel like a series of shell games, which is why Nintendo is probably the only game company that could introduce microtransactions and find itself in a swell of positive PR. People don’t have a problem with microtransactions in theory. They just feel cheated when those microtransactions try to hide. If people are going to spend money on a game, they should know exactly what they’ll be getting in return, and that personable Nintendo Direct approach to marketing is as much a factor in Nintendo’s ongoing success as any of its equally charming games.

The bunny’s step-by-step explanation is a bit longer than what we’ve posted here, but you can check out the full series of screenshots over at Kotaku. 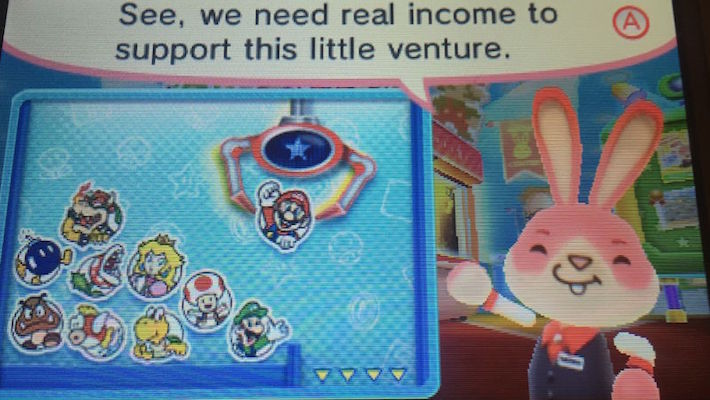