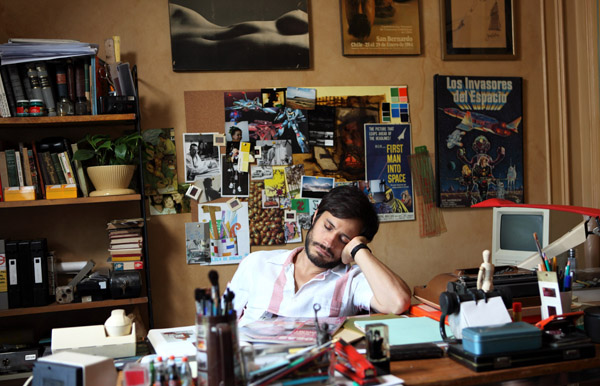 Nominated for a Best Foreign Film Oscar that it sadly had no chance of winning, Pablo Larrain’s No is a fascinating political thriller spiked with satire that not only stands up well against the Oscar winning Amour, but is also stronger than that other factually questionable poli-thriller that claimed the Best Picture prize. Much like Argo, No weaves a story that would seem utterly preposterous if it hadn’t actually happened and it’s been controversial talking point in Chile for fudging facts and downplaying turmoil for the sake of simpler storytelling. I can’t pretend to be well-versed enough in Chilean political history to comment on the accuracy of the screenplay, but as a film No is certainly a riveting, at times darkly funny, and unpredictable piece of work from director Pablo Larrain. It’s just a shame the movie didn’t slide into theaters during the Oscar crunch, because I worry that it will now be almost unfairly dismissed despite that nomination and the fact that everyone who went ga-ga over Argo really needs to No to see that style of filmmaking done right.

The tale takes place in 1988 during the midst of Chile’s military dictatorship. President Augusto Pinochet had taken over the country in 1973 following a CIA assisted coup and like all military dictators quickly settled into abusing his power. An election was to be held that year, yet no opposing party was permitted to run. Instead, Chilaen citizens could either vote “yes” for Pinochet’s continued rule or “no” (kind of like a middle school note between pubescent boys and girls asking to be liked). Pinochet allowed for the opposing voice to have 15 whole minutes of television per night to voice their cause, while his propaganda machine could run a little more freely.

The task of filling those minutes falls into the unexpected hands of René Saavedra (Gael García Bernal), the son of a former Chilean citizen who was exiled to Mexico. Saavedra works as a creative mind in a successful ad agency and opens the film showing off his hilariously campy (in hindsight) Cola campaign. Risking persecution against his family, Saavedra takes the gig and makes the odd decision not to hinge the campaign on smear attacks against the corrupt leader, but instead pulling together a poppy and endearingly/embarrassingly 80s ad campaign that sells freedom like Pepsi (complete with rainbow T-shirt logos and celebrity endorsements). Everyone around Saavedra thinks he’s nuts to downplay the important issues, yet when stacked up against the opposition’s tiresome old school propaganda, the No campaign takes off with the pubic. Pinochet’s officials go into a panic and soon Saavedra and everyone involved in the campaign are followed 24-hours a day until the election happens and then…well, that would be spoiling it (although Chile is no longer run by military dictatorship, so make of that what you will).

Pablo Larrain’s movie is absolutely fascinating, funny, and often quite tense. The director clearly sees the humor in the impossibly cheesy campaign, yet never loses sight how significant and even life-threatening mounting that campaign was. He constantly slingshots tone from comedy to suspense to tragedy and back, often within the same scene. But despite that the film somehow never seems disjointed has it races along to an inspiring (and thankfully earned) conclusion. Like many great films about major political events, Larrain knows that it’s the little people who often do the most important work and not larger-than-life leaders. So he keeps the movie identifiably mundane whenever possible. We never feel like we’re watching heroes, just people with the right idea at the right time who were able to change their country for the better. The performances are all deeply naturalistic and never once feeling stagey. That’s particularly true of Gael García Bernal, lead actor and longtime Latin star. Bernal plays Saavedra like a bit of an idiot with his heart and populist taste in just the right place. As always, he’s an amusing and grounding center to the movie and it’s a shame that he’s never been tapped by Hollywood given all of the impressive films he’s made in Central America.

Perhaps Larrain’s most audacious choice for the film was to shoot entirely on muddy three-quarter-inch videotape. It’s a low-fi, square framed, and highly degraded image that will certainly be tough viewing for audiences spoiled by the HD era. However, the reason for that aesthetic was simple and brilliantly applied. It’s the same equipment that news teams used at the time, allowing Larrain to incorporate actual footage from political riots and the original No campaign into the movie seamlessly. Even when actively trying to figure out what elements of the riots were staged with actors and what was pulled from the archives, I could never spot the dropped-in footage. The intense realism achieved by that shooting technique in undeniably impressive.

For all the technical experimentation and light tone used to dress up the material, No never loses sight of its central goals. The film very clearly communicates its slice of history while wryly commenting on the commercialization of political discourse. Every character is carefully established and through the grainy handheld video aesthetic, they never feel like “characters,” but actual people.  The only misstep is the occasional focus on Bernal’s character’s home life which amounts to little more than audience sympathy baiting, yet even that happens so infrequently that it’s little more than an occasional distraction. Over all, No is a fascinating historical snapshot and an intoxicating night at the movies for those who love political thrillers. In fact, it was the best example of that genre released last year, despite what Ben Affleck might tell you.