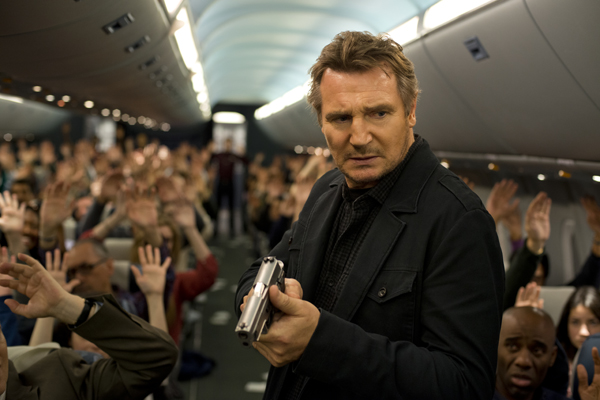 Non-Stop is great. It’s not great in the way that a traditional award winning kind of film should be great, but it’s a near perfect bit of action entertainment that solidifies Liam Neeson’s status as one of the best leading men the genre has ever had. It’s the perfect blend of brains and silliness with a high concept plot that suggest someone went to sleep on an international flight while watching Scream and they woke up watching Speed, then whoever re-wrote it just so happened to be a huge fan of underrated Die Hard clone Sudden Death. And it’s every bit as awesome as that sounds.

Federal Air Marshall Bill Marks (Neeson) is a wreck. He’s a drunk, he’s lost his family, he’s got money problems, and worst of all he seems to hate his job in every way. On a day where he doesn’t particularly feel like going to work and he’s rather get smashed with a bottle of Johnny Walker in his car on the tarmac, he gets roped into working on a flight to the London that will strand him for 3 days. Already annoyed, he reluctantly agrees to go, but there’s a huge problem: an unseen terrorist has hacked into a secure federally regulated network reserved only for flights that’s threatening to kill a random passenger every 20 minutes unless $150 million is transferred into a bank account. With the account somehow being in Marks’ name, the terrorist making good on his threat, and his own temper working against him, Marks has to clear his name and find out who on the plane has it out for him and why.

The plot of Non-Stop is more than a little silly and it does require a bit of a leap of faith in terms of suspending one’s disbelief, but once that’s out of the way the inner workings of everything going on makes perfect sense pretty much up until the villain is revealed, and even then only his motive is kinda suspect (although one could very credibly argue that the ludicrous reason all this happening is part of the film’s immense charm). If you want to nitpick just how the film’s text messaging bandit could credibly operate on a flight, how certain objects can suddenly appear out of nowhere, and how the climactic plan to save everyone’s life feels dubious, then this film will drive the viewer insane.

It’s not necessarily made for the logical brain, but it deserves tons of credit for being made for an audience that loves a good whodunit and that has fun openly engaging with such a silly story. It’s a plot so out there and implausible that once its dynamics are established it asks the viewer to keep up with the details and twists instead of dwelling on the fact that in reality such a scenario probably would have ended quite tragically with the plane just being shot down by fighter jets and everyone calling it a day back on the ground.

Non-Stop marks director Jaume Collet-Serra’s best work to date and it helps that the material seems to fit his sensibilities perfectly. Even in the sometimes wonkier, but never terrible fare that he’s been given in the past (Orphan, the House of Wax remake, the Neeson thriller Unknown), Serra has always excelled at creating tension and creating some kind of shell game designed to keep the audience on its toes even when the film is thuddingly obvious. Serra has studied the exact playbook that Non-Stop was written from inside and out, and he’s using it to create a pitch perfect rope-a-dope that makes the audience think they are watching something they have pretty well figured out from having seen this type of movie before and then yanking the rug out from beneath them. Serra knows that you will think that the plane’s other passengers made up of famous character actors (Julianne Moore as Marks’ seat-mate, Scoot McNairy as a man travelling opposite the direction he said he was travelling in, Michelle Dockery and Oscar nominee Lupita N’yongo as flight attendants) will all be seen as red herrings. He also follows these herrings around quite fastidiously, drawing attention to them one at a time for often long periods of time to lull the audience into thinking there couldn’t possibly be any other options for the villain to be. Also, unlike Luc Besson and McG in last week’s still stingingly dreadful 3 Days to Kill – a film that doesn’t have a tenth of the entertainment value that this has – Serra actually plays with the race of some of his characters and the prejudices one the plane (and possibly the audience) to exceptional effect. He misdirects constantly with music, edits and shots that hint at deeper meanings that aren’t there, and by always showing the audience everything as a clue without ever showing them the real clues.

Serra does more than simply make on-screen text messaging ominous and frightening in terms of the film’s thriller and action movie elements. The close quarters lends itself well to claustrophobic fear, clever use of special relations in terms of how everything comes together, and even in a few pretty awesome fight sequences. He has the ability in a thriller to make even the most inconsequential moments of people talking to each other or quietly observing something feel vital.  He’s quickly becoming a talent that I’m always willing to give the benefit of the doubt and who has proven to deliver the goods even in films that aren’t as worthy of his talents. Thankfully, Non-Stop is well within his wheelhouse.

But ultimately, the film belongs to Neeson, who as a badass outdoes his performance in Taken. That’s probably because this time out he has considerably more to work with than just a “particular set of skills” to fall back on. With the exception of Moore’s character, Marks doesn’t have any kind of support system on the plane that isn’t immediately skeptical or apprehensive towards him. He’s playing someone here that’s a lot more like famed action movie prototype and shining example John McClane. He doesn’t have some sort of team that he can call up or support that he can muster to tell him where to go and kick some ass. In this film, he has to do all of the legwork and all of the ass kicking himself.

Maybe it’s the fact that this year has been absolutely dreadful thus far, but Non-Stop emerges as a real standout in terms of entertainment value and in terms of how much it’s actively trying to deliver the audience that’s a good film. While some might find the inversion of genre clichés coy, it’s actually far more refreshing than anything that’s come along in the past two months aside from The Lego Movie. It delivers exactly what fans of a Neeson starring action film would want in ways they might not have fully expected, and it’s just clever enough to win quite a few potential coverts that might not have cared otherwise in the process.