Hi guys. Sorry things have been quiet on the film front for the past couple of weeks. In the interest of full disclosure, I’ll explain as briefly as possible. First, my computer and my external hard drive got completely fried and it took over two weeks to fix it. Sadly, anyone that I could have turned to for assistance in this matter was either out of town or working on other projects. On top of that, I had other work to do – having just finished writing a book that will come out later this year, but more on that at a later date – and with no back up or anyone else to assign to stuff, we are super behind in our film coverage. Anything that was posted over the past couple of weeks were things I was either able to finish in a very short amount of time on a borrowed computer or things that I had already completed in advance.

The good news: everything seems to be back on track. Apologies for any major releases we might have missed (which really means only All Cheerleaders Die, which rightfully came and went quietly because it wasn’t very good the first time I watched it), but here are some brief reviews of the past several weeks of releases for you to catch up on. Next week, everything should be back to normal.

There seems to be no stopping the Kevin Hart juggernaut these days, and with his favourite collaborator and director Tim Story on board, the diminutive and hyperactive comic seems to be staking a claim to become the next Adam Sandler. This Vegas set sequel to the 2012 ensemble comedy hit (based on the writings of stand up comic and talk/game show host Steve Harvey) offers Hart more of a chance to shine, pushing him front and centre, often to the film’s detriment.

It’s not that Hart isn’t funny when he’s on screen, but the film goes out of its way to very awkwardly give him a ton of obvious and over the top narration that isn’t necessary since it just explains everything that the audience can already see on screen.

But take the narration out of the equation, and Think Like a Man Too is a great bit of summertime lowbrow fun. It’s certainly not aiming high, the jokes are easy, and the whole thing feels like a less douchy kind of Hangover or Bridesmaids flick as the crew from the first film heads to Vegas for a friend’s wedding (while also suspiciously aping Detroit Rock City of all things), but at least there’s a consistency that suggests Story and his cast know exactly what the audience wants and expects.

It’s an unabashed crowd pleaser with no delusions of grandeur that gives the men just as many chances to act as foolish as the women. It’s easy going down, a lot of fun in parts, and despite most of the characters either being interchangeable or underdeveloped, it’s easy to see why it has become such a success this weekend. It’s a safe bet, but one that largely pays off and honestly the most satisfying comedy of the summer thus far. Now that’s a bet I never would have taken.

Clint Eastwood takes on the story of the formation of the 1960s troubadour group The Four Seasons with mixed results in this okay, if somewhat somnambulant porting of the titular Broadway musical to the big screen.

There’s nothing on display here that doesn’t conform to standard rock and roll biopic tropes. There’s the rise, the fall, the falling out, the understanding, the shady aspect of the business. You can almost guess every single thing that’s going to happen even if you’ve never heard of The Four Seasons.

Clint seems constrained here by the film’s standardized structure, and with the exception of roaring to life briefly thanks to some great musical numbers and a few decent performances, particularly from John Lloyd Young’s depiction of Frankie Valli and Vincent Piazza’s Tommy DeVito, the film feels like being stuck in a RV on a desert highway that’s been put on cruise control for 142 minutes. It’s not a bad film, but it’s one that’s so blandly competent that there isn’t much in either direction to say about it positively or negatively, making it the most disappointing entry in Eastwood’s late career renaissance. The tunes have some heart, but the movie doesn’t have much to offer other than that. And the less said about the bafflingly histrionic final third, the better.

Canadian filmmaker Richie Mehta returns to his sci-fi roots with this amusing, if somewhat slight family drama about abandonment and the ethics of time travel. Focusing on a young university student (Haley Joel Osment) who discovers his absentee dad (Rufus Sewell) actually found a way to make time travel work only to get stuck in the past and killed, Mehta wisely doesn’t focus on the sometimes wibbly-wobbly-timey-wimey aspects of his film’s core conceit, but instead asks deeper questions about fate and the choices people make to alter their lives. In truth, the highest compliment that could be paid to his work here is that Mehta could have entirely excised the time travel aspects all together and the film would have made perfect sense, but as a genre twist it adds a pretty killer hook. He also gets great supporting turns from Gillian Anderson and Victor Garber as Osment’s addled mother and concerned grandfather, respectively. The film starts to unravel a bit once the actual time travelling has to take centre stage, but that’s largely relegated to the final 15 minutes and it doesn’t negatively impact the film’s ultimate emotional and narrative goals.

Canadian filmmakers Marie-Hélène Cousineau and Madeline Ivalu follow up their award winning 2008 film Before Tomorrow with this much more deliberately paced and cerebral look at a family cracking at the seams in the secluded Nunavut community of Igloolik.

Not long after the death of his father, Montreal teenager Tomas (Lukasi Forrest) is brought North by his white, teacher mother (Marianne Farley) to take stock of their lives in the Inuit community where he was conceived.

Until the final third there isn’t a heck of a lot of fence swinging drama going on, but the culture shock Tomas and his mother are experiencing seems real, unforced, and deeply empathetic. They’re both on a search for answers of some kind, but neither can really understand the questions, leading to sometimes rocky interactions with their extended family. Cousineau and Ivalu shoot the film exquisitely and they never hammer home the obviousness of the narrative, making for an effectively low key character study instead of an Inuit porting of the early 80s melodrama the film’s script suggests.

How to Train Your Dragon 2

An equal in every way to the original 2010 animated megahit, this continuation in the adventures of a young Viking named Hiccup (voiced perfectly by Jay Baruchel) and his loving dragon Toothless feels like more of a conscious effort to mount a flourishing franchise this time out. But the remarkable visual splendor and a real effort to give the characters a lot more depth and heart make this one go the extra mile.

Sure, the actual plot involving a rival dragon trainer who wants to use all the dragons of the land for evil purposes (menacingly performed by Djimon Hounsu) has some wonky set up that can be surmised in a single sentence, but it’s enough to create a much larger visual and emotional world. Within seconds of starting, this effort shows that absolutely none of the magic that made the original such a disarming delight has disappeared. With this entry, the series moves from just being a good idea to a potentially vital movie franchise. It has grand ambition, and one hopes that this film will be successful enough for it to continue along those same lines.

Thankfully still showing in theatres and expanding to new markets despite not getting a chance to talk about it when it came out a couple of weeks ago, this latest effort from American auteur James Gray follows in the footsteps of his previous films that showed the intersection of crime and the pursuit of the American dream, but this one becomes his most beautiful and literal to date.

Using the historical backdrop of New York City in the early 1920s to show a culture in a constantly uneasy state of flux, The Immigrant follows a Polish Jew with an unearned bad reputation (played by Marion Cotillard) as she tries everything in her power to keep from getting deported and to help free her sister from the Ellis Island infirmary. She falls in with a kindly local pimp (Joaquin Phoenix) that loves her, but that she has no interest in, and becomes a pawn in his sibling rivalry with his crappy, but kind hearted magician brother (Jeremy Renner).

Gray shoots and directs like he’s trying to make the Academy Award winning best picture of 1984, which I mean as a high compliment. Literally no one makes historical dramas this way anymore, and everything being attempted here from the loose plotting with almost episodic asides to a complete lack of empathetic characters hits like a breath of fresh air. This might be Gray’s best constructed film to date, and one that takes what might have been lesser archetypes in unskilled hands and makes them into a riveting and well acted drama. It’s one of the best films of the year.

Speaking of films that will pop up once again on my year end best list, actor and filmmaker Richard Ayoade’s doppelganger comedy is unlike anything I’ve seen since David Lynch, Terry Gilliam, and Jacques Tati were all in their prime. It’s a playfully bizarre and dizzyingly funny tale of personal identity that also features leading man Jesse Eisenberg’s best performance to date.

A largely uninteresting and unremarkable corporate drone who works for the government in the somewhat distant, almost Eastern European looking future finds his life gradually being taken over by the arrival of a man who looks and sounds his equal, but who actually has low morals and a personality that can actually make a difference to the people around him.

A thoughtful Dostoevsky adaptation with a lot of cutting jabs at conformity and how people can misread bravado as being something exceptional, Ayoade makes a quantum leap in filmmaking prowess from his previous effort, Submarine. It’s all very silly and frightening, but it’s also impeccably mounted and singularly unique. You absolutely won’t see anything like this in this or any other year at the cinema. It has the ability to become a future classic. 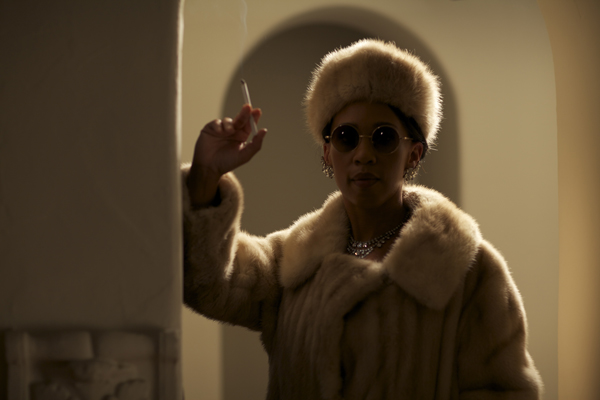 Oh, and if you are looking for my take on the pretty great documentary The Life and Crimes of Doris Payne (which is the one new release at The Bloor this weekend), check out my review from NOW Magazine and an interview I did with co-director Matthew Pond from last year’s Hot Docs festival.