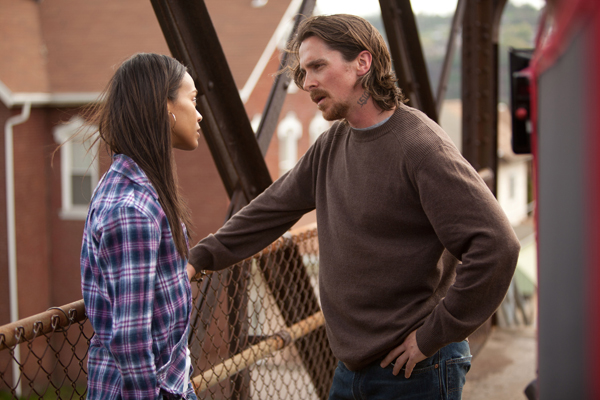 Within the cold, distant heart of the unsuccessful thriller Out of the Furnace beats a classical kind of pre-code drama. Faithfully recreating the trope of ne’er-do well brothers following on different life paths, director and co-writer Scott Cooper (Crazy Heart) aims for a character driven drama, but despite having an excellent cast of actors giving all they can to the project, there’s not much that can be done to give the movie any kind of pulse or momentum. It’s dull and plodding when the material suggests something with much higher emotional stakes. It’s the perfect example of a film that’s too subdued for its own good.

Recently released from prison following a lapse in judgement that led to a deadly drunk driving accident in 2008, ex-con Russell Baze (Christian Bale) returns home to a life he no longer recognizes. His father has passed away. His ex-wife (Zoe Saldana) has moved on without him and has started a new life up with the local sheriff (Forest Whitaker). Worst and most distressingly, his hot head veteran younger brother Rodney (Casey Affleck) has been getting mixed up in some dangerous underground bare knuckle fights for cash. Goading a booker (Willem Dafoe) he’s into for a lot of cash for his obstinate refusal to take dives, he begs for a fight run by a downright nasty and evil Appalachian type (Woody Harrelson). It’s a path that will bring Russell into direct opposition with Rodney’s path of self destruction.

Cooper and Brad Ingelsby’s script feels like a bit of a throwback to the early 1930s when the theme of one brother working to fix what his sibling did wrong was a popular storyline in hardboiled crime and gangster sagas. The material certainly speaks to a slower kind of contemplative familial melodrama grafted onto a sleazy thriller, and the gorgeously captured steely Pennsylvania mining town setting certainly adds a hefty amount of atmosphere. But that’s all that Out of the Furnace is: atmosphere.

Instead of making the characters more than just brief sketches, Cooper feels content to let his cast just brood, seethe, and occasionally explode with anger, but never letting these emotions feel significant. A good point of comparison would be the equally afflicted, but better film from last year Killing Them Softly. At least that film had an underlying subtext that made its endless shots of actors staring off into space pensively at least of passing interest. Everything about Cooper’s work is entirely surface level stuff.

At roughly the halfway point of the film, a twist happens that turns it into a different film, but at least the hairpin turn in the story makes narrative and logical sense. It’s a moment that should feel like a game changing turning point, but it never generates enough raw tension to warrant the effort the cast has been putting into the film. Cooper mistakes monotone for depth; thinking that adding a sense of ambiguity to an obvious story will somehow add depth. It doesn’t, and as a result it’s the rare case of a film with naturalistic performances that feels patently unrealistic.

But the performances themselves are worth noting. Bale doesn’t really stretch too far beyond the soulful, tough-willed, working class guy comfort zone that he had been establishing for himself as far back as The Machinist, but he’s a great choice for a lead character that needs to be seen as a sympathetic lesser of a lot of other evils around him. Affleck and Harrelson both get to steal the movie since they have the two characters most adequately in touch with their own rage. Affleck’s Rodney has never come back from his tours of duty overseas, and he can’t shut off the feeling that failure isn’t an option despite taking on a profession where all he can do is fail. Harrelson’s no-bullshit hillbilly kingpin certainly adds the menace that the rest of Cooper’s film lacks. Dafoe, Whitaker, and Sam Shepard (as Russell’s uncle) are welcome sights, but they’re still just used as window dressing for Cooper’s vision of what the story should be.

Out of the Furnace is far from terrible or irredeemable, but it’s a low key thriller that comes off more aloof than thoughtful. It’s the kind of movie filled with quiet moments that could make an exceptionally made thriller into something special, but all of this film’s thrilling moments (outside of the brutal fights) are constructed to be just as quiet. And despite being “one of those movies” with a major twist, it feels decidedly devoid of ambition; never feeling like a gripping thriller or a drama. It’s just kind of sitting there, and you wait for something to happen beyond just narrative kinks, and it’s disappointing that there’s not much more than that going on.