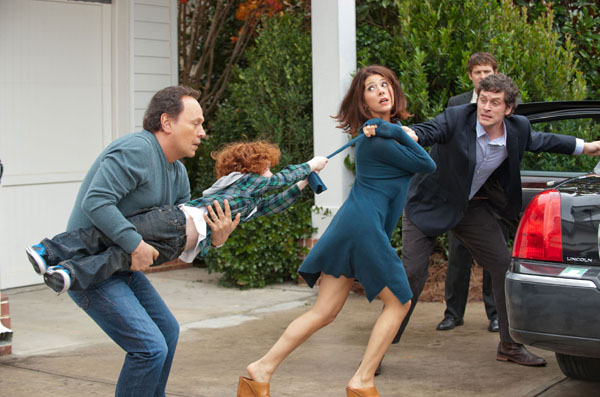 The new Billy Crystal and Bette Midler comedy Parental Guidance is the definition of the term critic proof, so to avoid reliving how awful I found it in spite of the preview audience uncomfortably roaring almost unconscionably into laughter, here’s a handy checklist of items to determine whether or not you’ll enjoy the film in order of importance. If you hit half of these, you’ll probably enjoy it. Go ahead. I won’t judge you:

1. You want to see Billy Crystal get hit in the nuts with an aluminium baseball bat before puking up a chili dog all over an 8 year old.

2. You want to watch a 6 year old take a piss atop the half-pipe at the X-Games, nearly murdering Tony Hawk in the process.

3. You think the Meet the Parents saga ended way too early.

4. The potential sight of Bette Midler dancing on a stripper pole for no real explainable reason and without further payoff seems funny.

5. You want to haul off and spank everyone’s kids just on principal.

6. You think tofu, almond milk, and dietary restrictions are totally bullshit because what the hell is with kids today, anyway?

7. You think this plot sounds amusing: A new school mother (Marissa Tomei) has a never once explained aversion to her recently fired baseball announcer father (Crystal) and retired weather reporter mother (Midler) simply because she wants to live a vaguely new-agey life with her inventor husband (an actually really great Tom Everett Scott). They have to go and do something for his job and she’s deathly afraid of leaving their two sons (one a shy, bullied boy with a stutter, one with a precocious imaginary kangaroo friend and almost psychopathic tendencies) and hyper-motivated eldest daughter with her kooky old-school parents who have no clue how to raise kids, like, at all.

8. You think uncomfortable racist jokes are funny as long as they come from the mouths of old people who were “from a different generation,” despite being played by actors who should positively know better and it seems out of character for them.

9. You think there are too few family films that involve kids going crazy while on a sugar rush.

10. You think kick the can is a pretty great sport and always wanted to see a heartwarming moment where a family bonds over playing it in the rain.

11. You love actors who mug of all ages.

13. You missed Billy Crystal taking on more vaguely sport related roles after Forget Paris and you always wished he would play the kind of sports commentator that says a fat kid looks like he just got off a raft from Cuba.

14. You missed Crystal or Midler, period.

15. You always have the lowest expectations or you truly love every movie you go to see because you simply see it as a night out. Again, I’m not judging.

16. You have given up all hope of ever seeing a good film ever again in your life

Saying anything else beyond this list and expressing how much it truly sucks on a thoroughly depressing level that makes me wish the Mayans were right would be fruitless.