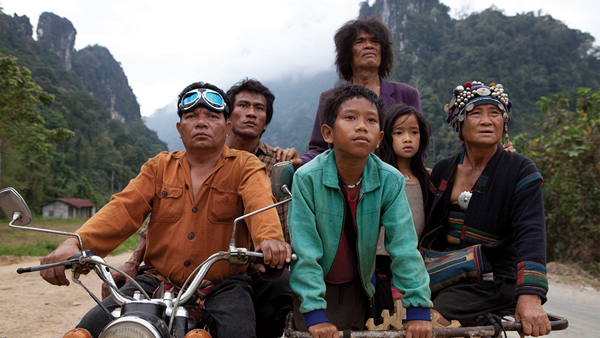 The Rocket’s narrative is deceptively simple: after Ahlo’s twin brother dies as a stillborn, the young Lao boy must prove to everyone that he isn’t the harbinger of misfortune, despite a string of tragic events that chases his family out from one unwelcome village to another. They find a drought-stricken village conducting a rocket contest where denizens hope the most powerfully built rocket will “prick the arse of the gods” and bring much-needed rain. Cashless and denied acceptance by the villagers, Ahlo’s family is uncertain about their future. It may seem implausible that a child could build the most powerful rocket and win contest money, but this is a movie about perseverance, after all, and who better to prove himself than an unlucky little boy who wants to help his family find a permanent home?

Ahlo gets help in creating the explosive from the unlikeliest of places, finding kinship with an outcast family whose uncle is regularly dismissed due to his constant drunkenness. The man is a source of great knowledge, however—at least, when it comes to blowing stuff up, information he freely exchanges to Ahlo for booze.

While the film follows the traditional trajectory of a high-stakes contest story, The Rocket succeeds where similar films have failed by seamlessly weaving in the element of luck. Ahlo’s adventures frequently lead him to almost certain death on more than one occasion, indicating that not only could there be a grain of truth about the curse, but that life in poverty-stricken Laos is downright treacherous, thanks to unexploded ordnance, remnants of the Vietnam War that regularly jeopardize the lives of Lao people. The Rocket is more interested in emotionally invested storytelling than political commentary, but the undetonated bombs provide more than just a realistic backdrop. Their unavoidable presence has clearly dug deep into Lao superstition and the wounded collective psyche. It’s within this uncertain gloom that Ahlo is finally able to move on from his underdog status, with the film climaxing on a sweet, satisfactory note. (Tina Hassannia)