Paul W.S. Anderson’s Resident Evil is the little franchise that could, a middling action horror adaptation that became more endearing the longer it stuck around. The series has now reached its conclusion with the release of Resident Evil: The Final Chapter, the sixth(!) live-action installment, and the fact that most of them are entertaining is almost as improbable as the fact that they made six of them in the first place.

The latest film is no exception. The Final Chapter is set in a post-apocalyptic hellscape in which the T-Virus has turned the entire global population into zombies. The plot kicks off when Alice (Milla Jovovich) gets a message from the Red Queen (Ever Gabo Anderson), an artificial intelligence that runs the Hive, the Umbrella Corporation’s secret laboratory complex beneath Raccoon City and the site of the initial T-Virus outbreak in the first film. The Queen tells Alice that she has two days to make it to the Hive to find and release an anti-virus that will stop the zombies and end the outbreak.

Needless to say, Alice decides to make the trip. Along the way she has a run in with Alexander Isaacs (Iain Glen), the Umbrella CEO who has turned himself into a quasi-religious messianic figure planning to use zombie armies to eradicate Earth’s few remaining human survivors. Alice eventually teams up with a few of those survivors (including Ruby Rose and Ali Larter’s returning Claire Redfield) to infiltrate the Hive. There are a few twists and a lot of shenanigans involving clones from previous movies (Resident Evil gets weird), but you don’t need to be familiar with the backstory to follow what’s going on.

Beyond that, there’s really not all that much to say. Resident Evil: The Final Chapter is more of the same, so if you’ve enjoyed previous Resident Evil movies, you’ll probably enjoy this one. It’s not quite as over the top as Extinction or as goofy as Apocalypse, but it’s far less confusing than Retribution and ties off enough loose ends to bring Anderson’s Resident Evil saga to a satisfying conclusion. The movie has some decent fight scenes, some cool monsters, and a balanced blend of action, jump scares, and unintentional comedy (it’s unclear why Isaacs continues to follow Umbrella’s corporate guidelines after wiping out humanity and any court that would hold him accountable for violations of employment policy). 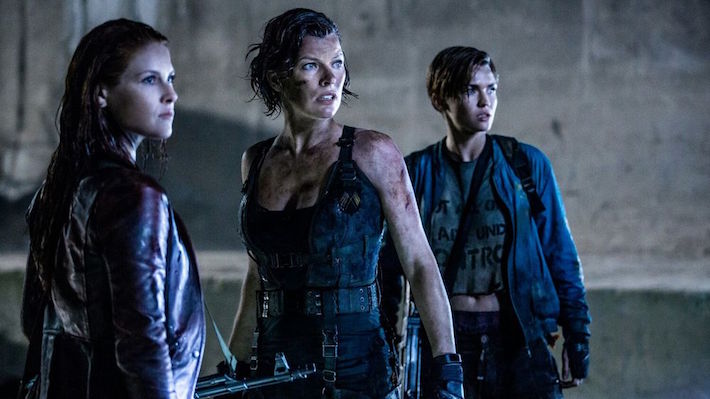 That’s enough to make for a reasonably diverting piece of entertainment. Sure, there are plenty of minor flaws. Many of the fight scenes are severely over-edited and none of them seem to be more or less significant than any of the others, so The Final Chapter doesn’t build to the epic showdown you’d expect from the sixth installment in a franchise. It’s also worth noting that the things that make the movie fun don’t always seem to be intentional. The inane logic falls apart as soon as you start to pick at it, but the stuff that doesn’t work is usually silly enough to keep your mind engaged until you get back to the scenes that work as intended.

It is a little odd to see The Final Chapter immediately after playing Resident Evil VII, which ditches the convoluted Umbrella conspiracies and instead takes the game franchise back to its horror roots with a terrifying, claustrophobic grindhouse thriller. I’d love to see a Resident Evil movie that captures some of those grimier nightmare elements. As it stands, Anderson has never displayed any interest in true horror, so it feels like the franchise left a lot of neat ideas sitting on the table.

However, the nonsensical lore is just as integral to Resident Evil as the zombies, making Anderson’s films an accurate reflection of one aspect of the Resident Evil mythos. With that in mind, I can’t review what could have been. I can only review what is, and on that front, Resident Evil: The Final Chapter is of a piece with the films that came before it. It’s dopey yet endearing, with a game cast that’s in on the joke and happy to chew up the scenery with silly dialogue. That makes for a good time as long as you can set your brain to the proper frequency.