Welcome to the first installment of what is sure to become the biggest thing on the ‘net since it stopped making those NIN-inspired up dial up noises. This will be an ongoing series of articles in which I recommend a film from the decade that gave me the love of the medium. The nineties were by no means the golden age of cinema, but it was a pretty damn good era to come of age in. I will try to find titles a lot of people may have missed, but I’ll also be encouraging you to take a second look at movies you may have dismissed the first time around while hopefully helping you discover some bargain bin gems. Our first nineties notable was directed by a man who made his name acting cool in the eighties.

Before Sean Penn was milking the Academy for a yearly performance nomination, he made his directorial debut with an extremely savvy, underrated film called The Indian Runner. The few films he’s directed since (The Crossing Guard, The Pledge and Into the Wild) have generally been well received as mature, realized projects, but I still feel this often overlooked first film is his strongest.  The year was 1991, and the barely 30 year old actor demonstrated that he was a lot more than just that, and was in fact very well versed in cinema, its past masters as well as its capacity for artistic expression. 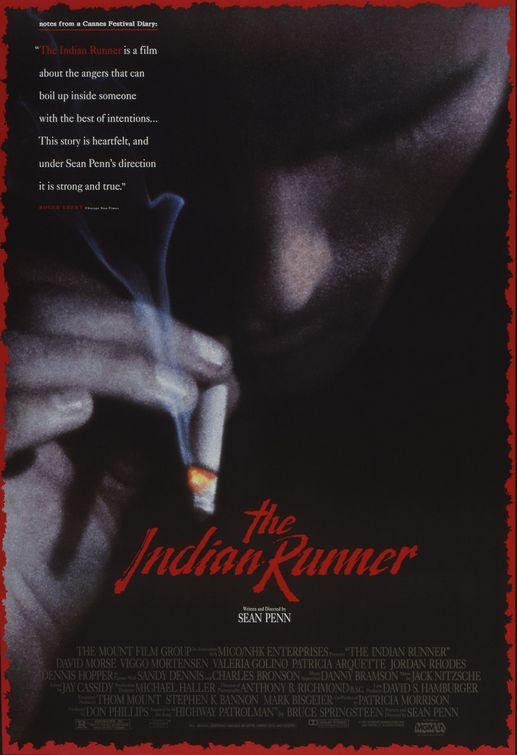 When people think of independent cinema in the nineties, many think only of Tarantino, Kevin Smith, and all those that tried to emulate one of the two. The Indian Runner came out before either of them had made a film, and features a cast that I’m sure had Tarantino seeing it the first opportunity he got. The film stars David Morse as the highway patrolman Joe Roberts and Viggo Mortenson stealing every scene as his enigmatic, trouble making brother Frank. The supporting cast boasts names like Charles Bronson, Patricia Arquette, Dennis Hopper, Valeria Golino, and even a brief appearance by a young Benicio Del Toro. As if this cast wasn’t already enough to give it a 10/10 on the ultra cool scale, Penn got the story idea for his original screenplay from Bruce Springsteen’s ‘Highway Patrolman.’ Refer to song below for plot summary.

Probably because the film takes place prior to the Boss’ day, the song is not featured in the film, but the badass classic rock soundtrack compliments several scenes beautifully.

Attesting to Penn’s well placed influence and awareness is the film’s dedication in loving memory of John Cassavetes and Hal Ashby. Myself being more familiar with Cassavetes (actor turned father of independent cinema, who created very personal projects such as A Woman Under the Influence), I can certainly see moments reflective of the great director. My favourite being a hilarious little scene which relates little to the rest of the plot in which a nosy local is reaching out to a clearly perturbed Joe as he washes his police cruiser. This is a moment of levity in what is otherwise a heavy, serious drama. Penn  had developed a relationship with Cassavetes before his passing in ’89. They never collaborated, but  Penn later starred in She’s So Lovely directed by John’s son, Nick Cassavetes.

The film will often surprise you with strange little touches of humour, such as the aforementioned car washing scene, and several other moments which for some reason feel almost Lynchian to me. If you’re looking for a chuckle I’d recommend checking out the trailer on YouTube (after seeing the film of course) which I see as an amusing demonstration of the advertising team’s total inability to market what is essentially an art film. I’m reminded of the classic re-cut Shining trailer, particularly when the trailer’s cliched voice states “Franky and Joe have one more chance to make everything right” making it look like a fun filled film about two brothers re-kindling a childhood relationship. Are trailers still this misleading, or do you think they’ve improved? Tough to say.

Anyway,  I’ve ranted on long enough for now. Just see it, and hopefully you will recognize how elements of the film pay homage to some of cinema’s most inspiring auteurs while others make it truly unique and one of the first in what was to become a great decade for independent cinema. A surprisingly mature and sentimental film to come from this young actor with a bad boy image.

Fun fact: The film has a birthing scene with a ‘crowning’ shot predating Knocked Up‘s by 16 years… eat that Apatow! (Judd Apatow has also named Cassavetes as an influence… I guess they both directed movies, I see no further connection).