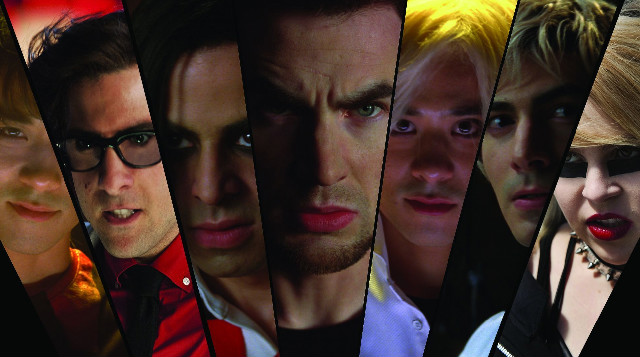 Thus far this month Dork Shelf has featured several reviews of Scott Pilgrim vs. the World–you can check them out here. And here. These are excellent reviews, from the non-biased perspectives of writers who were not steeped in the books before watching the movie.

This review is the opposite of that. I’ve been reading, collecting, and obnoxiously pushing the Scott Pilgrim graphic novels on friends since mid-2005. Will has asked me to write a review of Edgar Wright’s current film adaptation from the decidedly-biased perspective of a longtime fan. And I am nothing if not biased.

By the way, I’m assuming that if you’re still reading this, you’ve both read the books and watched the movie. Either way, you’ve been spoiler-warned.

First off… I loved the movie. It is a masterful, original, and thoroughly ambitious piece of filmmaking. I believe that even if it doesn’t demolish the opening weekend box office, it will certainly carve out a place as the first true classic film for the NES generation. This is not just a movie about references we love, it’s a movie that uses those references as shorthand to express the experiences we all share in our early 20’s: love, loss, heartache, and (hopefully) growth. The movie absolutely embodies the themes of the comics, which keeps the heart of the story intact. Oh, and this is certainly my favourite portrayal of Toronto on film that I’ve ever seen. Take that, Don McKellar.

As an adaptation, well, that’s trickier. I understand that screenplay storytelling works quite differently from graphic novels’–the novels can afford to be sprawling, tangent-filled, and allot time for back-story and asides, whereas movies have to move. The novels also had the luxury of a six-act structure, whereas the movie goes decidedly 3-act. The movie seems to have Scott hit an emotional high point right around defeating Ex #2, but it’s a long steady drop of sadness and anguish until his confrontation with Gideon. As I stated in my review of Scott Pilgrim’s Finest Hour I’m a big fan of Volume 4, namely for it’s well-earned uplifting ending. In my opinion it is Volumes 4 and 5 of the series that get the shortest shrift in the movie, effectively being dismantled for spare parts.

On the other hand we keep most of Volume 3. Problem is, much of this time is given to Scott’s dealings with Envy, without supplying us the back-story on their relationship (save for a few hints). Perhaps I’m asking for things to be spelled out too much, but bit seemed like there was a lot of set-up of Envy in the first act, for not much payoff. This became especially noticeable once she disappears completely from the rest of the film.

The main change that kept nagging at me was the movie’s timeline, which condenses the book’s yearlong arc into a period of about 2 weeks. For me, this strained belief that Scott and Ramona’s relationship was all that important – they’d barely been on two dates by the time he was fighting Evil Ex #2, and by Ex #4 they were already well into rocky relationship territory. As a result of the time crunch we lose a lot, and I’m torn as to whether some of the changes were worth it. I couldn’t help but feel that casting played a part in some decisions: namely hiring Oscar nominee Anna Kendrick as Stacy Pilgrim and Parks and Recreations’ Aubrey Plaza as Julie Powers. They’re both fine actresses, and manage to steal each scene they are in. Unfortunately, their characters are two of the least memorable from the book in my opinion, and if we needed to cut screen time to make room for, say, more Kim Pine or back-story of Envy and Scott’s relationship, Stacy and Julie are the two characters I could have done with less of. Seriously, we get almost no Kim Pine. That’s a shame.

Another significant movie change is that Knives Chau becomes a much more prominent character. In the books she would often disappear for long stretches, allowing the reader to often excuse Scott’s shabby treatment of her (since we spend much more time with him – not to mention, “hey, he’s the protagonist!”). In the film, Knives (as played by the wonderfully cast Ellen Wong) is almost too empathetic, and it’s difficult not to wholly take her side when Scott emotionally devastates her. Repeatedly. The moment at the Katayanagi twins battle of the bands is especially cold. The point is, without the ups and downs that we get in the books, Scott is a much harder character to actually… like.

A few more small quibbles: I hate when a great supporting character like Stephen Stills gets “Ron Weasley-ed” in the film adaptation (ie. A strong, stoic character in the books becomes the quivering, anxious comic relief in the film adaptation). Placing the Nega-Scott battle after the defeat of Gideon – then having the fight turn into an off-screen throwaway joke – seemed anti-climactic (even if it was a hilarious joke). Oh, and I know Roxie is already perhaps the most outrageous of the Evil Exes, but I had hoped Mae Whitman would get a bit more time to flesh our her character beyond a fairly one-note cartoon (however, again, she is hilarious in the short time she is given).

In short, the movie is as good as you’d hoped – it just moves at a much faster clip than the books. This is likely necessary, since Edgar Wright clearly made the wise decision to not be slavishly beholden to the books and instead craft the movie into a singular experience of it’s own. It’s an experience that arguably would have been even better with the sight of Honest Ed’s department store imploding… but then, nothing’s perfect.