Shock and Awe: The Grindhouse Experience Returns to The Fox Theatre - That Shelf Skip to main content 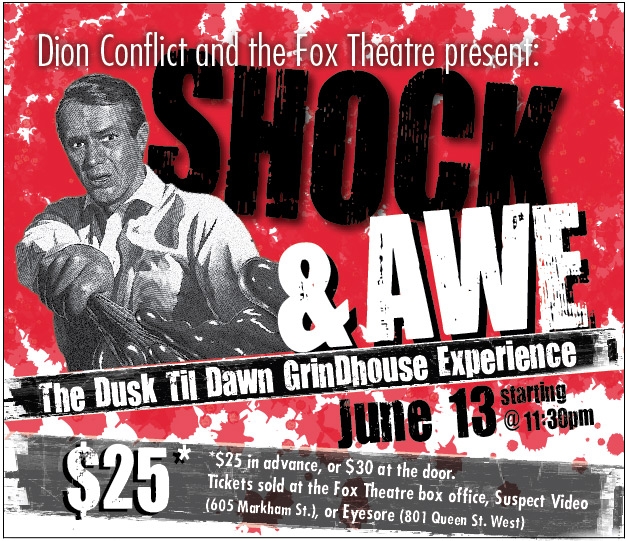 The Fox Theatre recently announced that the all-night grindhouse marathon Shock and Awe will be returning next month. The event starts on June 13th at 11:30 and runs until 10:30 the next day.

The event will feature some amazingly bad/awesome films from the 60’s through the 80’s all presented in 35mm, including Swinging Pussycats, Hell’s Angels on Wheels, Return of the Living Dead and a mystery film. It’s sure to be an awesome time and tickets are $25 in advance.

For full details visit the Shock and Awe page on Facebook.

Complete lineup of films after the jump.

Mona (1970): The first theatrical adult motion picture, complete with bad wigs and dungy allies! The trials and tribulations in the day of Mona, a Valleri Bertinelli knock-off and the weirdos she meets. Bukowski written actors seem like they’ve just popped out of the methadone clinic to do some summer stock.

Swinging Pussycats (1969): Lost West-German Eurotrash showing the sexy hijinks at Filander Manor. Can Alexandra endure an entire summer at her family’s castle after her return home from school? Filled with more loins than plates of schnitzel at Octoberfest!

Hell’s Angels on Wheels (1967): Jack Nicholson and real Hell’s Angels terrorize the screen! A gas station attendant (Nicholson) finally gets into the Hells Angels & goes on a rampage of sex, drugs, rock and roll, and violence! It’s a battle of bikers against hippies! Ripped from todays headlines of Quebecois newspapers!

Screams of a Winter Night (1979): The under-rated horror gem from Louisiana which after seeing, you can see from where Friday the 13th, The Evil Dead and Blair Witch Project borrowed. A group of teens camp out at an abandoned house and share ghost stories they have heard from the area. From it’s opening credits, you know you’re in for some creepy thrills. Still unavailable on DVD.

The Return of the Living Dead (1985): The Dan O’bannon classic. Thrills, chills and chuckles combine in the 80’s zombie classic as a gas released in a medical supply company brings the dead to life!