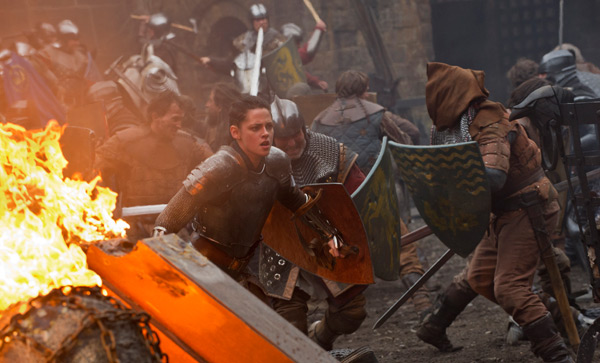 There’s something so delightfully old school about Snow White and the Huntsman that makes it charming and extremely entertaining in spite of a handful of flaws. In an age when most people who make fantasy films and fairy tales feel the need to tart their films up with an abundance of slow motion or visual excesses (Tarsem and Zack Snyder, I’m looking squarely at you guys), it’s refreshing and heartening to say that first time director Rupert Sanders has crafted nothing more than a straight up action fantasy epic that holds up well when compared against standard bearers like Ridley Scott’s Legend and Wolfgang Petersen’s The Neverending Story. By big budget, summer blockbuster standards, the restraint shown here actually brings out the epic nature of the tale quite beautifully, making for one of the most pleasant surprises of the summer thus far.

Using the famed fairy tale of Snow White as a template, the film finds our titular heroine (Kristen Stewart) imprisoned by her evil stepmother and current queen Ravenna (Charlize Theron) in a tower. Snow White has grown so beautiful while locked away that the magical powers and youthful façade of Ravenna have begun to fade. Just before Ravenna can eat Snow’s heart, however, she escapes to the dark forest and a local tracker, drunk, and widower known simply as The Huntsman (Chris Hemsworth) is tasked with finding her, after which time Ravenna says she will resurrect the man’s dead wife.

The screenplay from John Lee Hancock (A Perfect World), Hossein Amini (Drive) and first timer Evan Daugherty hits all of the expected plot points one would remember the original story having, but between those moments they add some very interesting original elements. Scenes depicting Ravenna’s abuses of power add the most, as the audience gets to fully see the squalor that her subjects live in. She was a person so evil that almost every living entity in her kingdom either died or became dark and twisted in some way. This extends to Ravenna locking up all of the beautiful girls in the land and literally sucking the youth out of them to keep up appearances.

While the film still largely rises and falls on the actions of Snow White, the film is owned largely by Theron who gives a stellar performance as the evil queen. Her voice rising and falling depending on her degree of anger, her turn here is positively chilling, and she’s aided by a script that bothers to give the character a logical backstory that doesn’t seem forced. Her motives are made clear early on that she wants humanity to suffer because of what she was forced to endure, and while she isn’t sympathetic in the slightest, it offers the audience something to latch onto.

Snow White doesn’t fare as well in her own story, but Stewart does a fine job in a role that she might be slightly miscast in just based on her looks. She certainly handles the emotional requirements of the role quite well until the screenplay lets her down a bit in the final 20 minutes or so. Hemsworth seems to be having a blast simply doing a medieval version of John Rambo. Also adding some assists are a who’s who of British actors portraying the dwarves that aid Snow White and The Huntsman on their journey. It’s been largely spoiled by this point the names of the actors playing the dwarves, but it’s a nicer surprise if one goes in completely cold before seeing the film.

As with many films of this scope, the mise en scene rightfully takes center stage and for once this summer it seems like a film helmed more by a filmmaker than by a studio, committee, or effects department. Sanders allows viewers to take in all of the proceedings (shot partially in gorgeous 65mm), even in the large scale battle sequences that open and close the film. This isn’t quick cutting, slow motioned, whip-pan filmmaking. There’s a real art and nuance to the work being put in by the production design team, actors, and effects people and Sanders wants to showcase them in the best way possible, even when the script doesn’t turn out to be entirely up to the task or when the grittiness of the story occasionally feels stunted in an effort to get a more profitable rating.

The story starts to come undone just before the ending, but not enough to dampen the film’s enjoyment. Aside from suffering the same gaps in logic and pacing that any faithful fairytale adaptation will have, the introduction of a very half assed love triangle between Snow, Huntsman, and a former teenage crush (Sam Clafin) could’ve been excised and Snow’s rise to being somewhat of a military leader comes literally from out of nowhere since the film makes great pains of showing just how little self-defence she knows.

In a way, that last criticism does bring out one of the film’s more positive aspects, though, which is the way it takes a fairly misogynistic fairy tale and levels the playing field with everyone involved. Snow comes across as being a tougher person here than in the original story, and Raveena has such a believable and justifiable grudge against men in general that she becomes understandable. Hemsworth’s depiction of Huntsman as a complete meathead also elevates the women of the story to a far more reverential status, and following the miserable failures of Tarsem and Snyder at creating feminist fairy tales, it’s a welcome change.

There’s something satisfying and nostalgic about Snow White and the Huntsman that feels like being stuffed after attending a buffet filled with nothing but comfort food. It’s certainly not high art, but there’s more than enough memorable moments here to make most summer moviegoers feel like they got their money’s worth and that they weren’t jerked around in many ways. Above all else and for whatever flaws people might think it has, this film is unabashedly genuine and the rare example of a blockbuster epic coming from a good place.