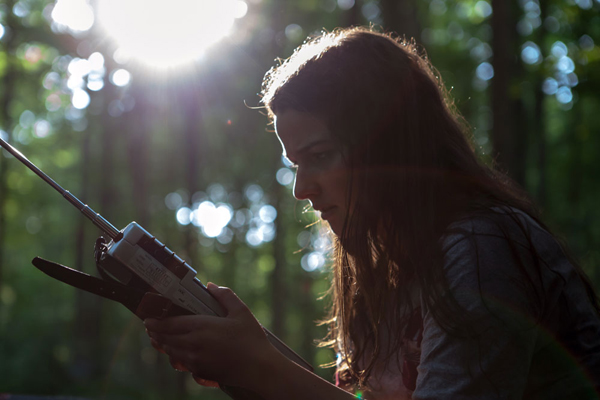 The Canadian thriller Solo lives up to its modest title and supplies no more and no less than what’s needed to be effective. A stripped down killer-on-the-loose yarn and survival narrative, first time feature filmmaker Isaac Cravit has crafted a taut, beautifully shot, and well performed reworking of genre formula. It’s not a huge reinvention of the horror movie wheel, but at an even paced 78 minutes when you lop the credits off it certainly doesn’t waste any breath or time.

Gillian (Annie Clark) is a teen coming off of a troubled year. There’s some concern for her mental health and she has a history of self-harming. In an effort to prove that she has improved, she accepts a job as a counsellor at a summer camp. Upon her arrival and some brief training, she’s told by her boss (Richard Clarkin) that she has to perform a “solo”: two nights by herself on a supposedly secluded camp owned island with minimal supplies in an effort to prove to parents that their kids are being watched by people with necessary survival skills. Already ill at ease, someone almost immediately begins terrorizing Gillian and it’s clear she isn’t alone. Is it the creeper son of her boss (Stephen Love), the mysterious, but kindly seeming older gentleman that’s technically trespassing (Daniel Kash), or some other unforeseen culprit?

The actual mystery to the identity of the villain isn’t too hard to figure out and is dealt with fairly early on before Cravit moves on into full on hero versus villain duel, but at least he establishes all that needs to be said. The formula for a successful film of this kind isn’t rocket science, and while Cravit isn’t deviating too far from the playbook, at least he isn’t overreaching. He gets a lot of help from a well tuned performance by Clark, who exhibits not only a great deal of empathy for the character, but who also commits quite physically to the role. Cravit also has a great eye for menacing looking shots and scenarios that can quite often build suspense in the most innocuous and bucolic of settings without resorting to fast cuts, jarring pans, or some kind of grinding soundtrack. It’s mannered and quite mature for a low budget thriller.

If it sounds like I don’t have a lot to say about Solo, that shouldn’t be held as a slight against it. There’s a preciseness to it that’s welcome and a degree of competency that sadly feels like a rarity these days in low budget thrillers. It’s a solid little shocker with some decent scares and suspense that should please most genre buffs.