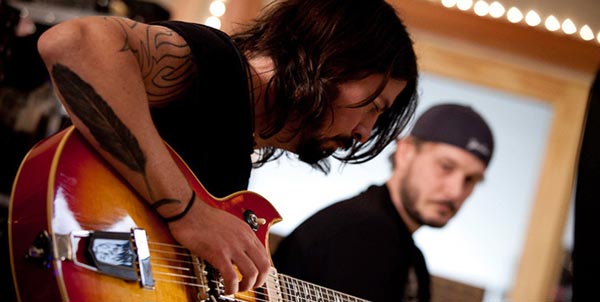 Tucked away in a chronically flooding parking lot in Van Nuys, California there once was a former amplifier factory that was converted into a dingy, no frills recording studio with a top of the line analogue console known for producing a large number of platinum records. So goes the story of famed recording mecca Sound City as depicted in the documentary of the same name from Foo Fighters frontman, former Nirvana drummer, first time filmmaker, and studio alum Dave Grohl. It’s a pleasant, thoughtful and humanist take on a historic non-living musical icon that should appeal to music and film buffs quite nicely for the first 70 minutes or so before losing a lot of steam very quickly.

Since 1969 the staff at Sound City had been known for being the home for hit records made by everyone from Fleetwood Mac to Rick Springfield to Barry Manilow to Slipknot and beyond.  Grohl talks to the people who shaped the studio into the stuff of legends, a wide range of artists, musicians, producers, and workers, and charts the “space that never should have worked” from it’s rocky start through the late 70s to mid-80s heyday, it’s problems trying to keep up with the digital revolution in the late 80s, it’s resurrection thanks to Nirvana’s Nevermind album, and it’s eventual shuttering thanks to raised costs for analogue tape and the inability to keep up with the influx of Pro Tools based mixing.

What works so well about the first half of Sound City is that Grohl turns out to be a pretty great storyteller, and he knows how to edit together the stories of people who have lived life and can go on endlessly bullshitting about the good old days. Grohl gets to the heart of the story and explain why these things matter not only to him, but also to the history of music as a whole. It’s full of good humour and generous self-effacing from people who would normally be self conscious and guarded about talking about anything aside from the recording process. The first 70 minutes is the kind of filmmaking and writing that makes people care deeply about those involved, and it’s the kind of film that movie and music nerds will love because the anecdotal minutiae here is great stuff.

Unfortunately, Sound City runs an almost unconscionably long 107 minutes including understandably lengthy credits and after about 80 minutes, the story of the studio has become wrapped entirely after Grohl purchases the analogue tape based console from his own studio. The film goes on as we watch Grohl invite over former Sound City hitmakers to work with him and producer Butch Vig on trying to recapture that trademark sound.

The jury is still out on the second half of the film and whether or not Grohl was able to pull that off musically, but this section of the film feels pretty dry and repetitive and reminds viewers that the actual raw look at the making of something really isn’t that interesting. It’s somewhat odd how the first part of the film feels so incredibly on point before turning into what’s essentially a demo reel made up largely from odds and ends. The music is great for the most part in this section, but there’s no longer a real reason to care and the studio itself is largely not even mentioned. It becomes a commercial for the album that drops in March that we’re seeing the filming of. Sure, there’s a look at Paul McCartney working with Grohl and Vig, but it really is just watching people showing up and doing their job. It forgets to inject the passion that made the story work off the bat. It’s a clinical feeling send off to an otherwise warm and inviting picture. On the other hand, that album is probably going to sound great thanks to all of the hard work the audience knows went into it.