After 42 years and nine movies, Hollywood’s most beloved space opera is about to come to an end. Today at Star Wars Celebration Chicago, the folks at LucasFilm dropped a couple bombs on Star Wars’ fans. The first, a teaser trailer for Star Wars-Episode IX. And the second, the movie’s title: Star Wars: The Rise of Skywalker.

The trailer, narrated by Mark Hamill’s Luke Skywalker ends with him stating, “No one is ever really gone.” Sure, director J.J. Abrams likes to lure audiences into his mystery box, but Star Wars’ fans are a rare breed of fandom. Abrams knows they will pour over each frame in the trailer looking for any hint of what happens in the next movie. And still, the trailer’s phrasing opens up a world of possibilities.

You take this statement to mean the last Star Wars movie played a fast one on us. Perhaps the film tricked us all and Luke Skywalker isn’t really dead. Think back to how Solo brought back another long-dead Star Wars character. Movies, TV shows, and comic books pull this trick all the time.

You can also read this statement in Jedi terms. We know that Jedis can return to their allies as sentient blue ghosts. Could this statement signal Luke will return to mentor Rey the way that Yoda appeared to him?

You can even take the phrase, “No one is ever really gone,” in a meta sense; we see Leia Organa in the trailer even though Carrie Fisher passed away before the film was completed. 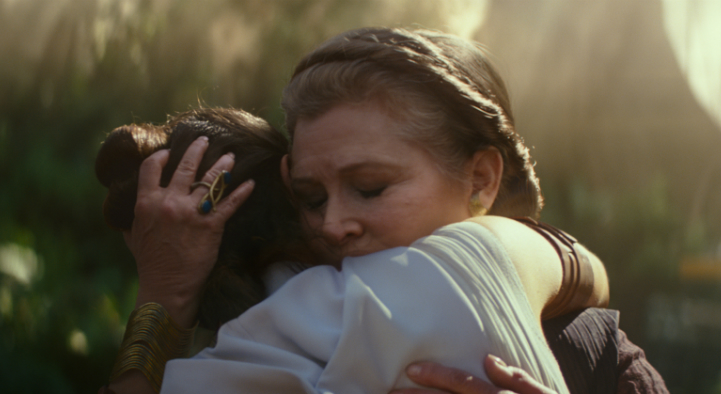 Most concerning, though, is the sinister laughter that closes out the trailer. It would appear to be the cackle of one Darth Sidious, also known as Emperor Palpatine, the Imperial ruler and Sith Lord who met his end at the hands of Darth Vader in Return of the Jedi. Palpatine’s presence in the film was bolstered by the fact that actor Ian McDiarmid, who played Palpatine in both the Original Trilogy and the Prequels, arrived on stage just at Star Wars Celebration in Chicago just after the trailer premiered.

There are so many questions – and that’s the mark of a good teaser trailer. Does the title mean that there is another Skywalker destined to reveal themselves? Star Wars’ fans lost their minds when The Last Jedi revealed Rey’s inconsequential lineage. Could Abrams dismiss The Last Jedi and reveal Rey was a Skywalker all along? Or is there another Skywalker out there somewhere? Was Luke hiding out on Ahch-To to avoid child support payments?

The only thing we know for sure is that final entry in Star Wars’ Skywalker saga will remain one of the year’s biggest stories. Let us know what you think the title means @ThatShelf.