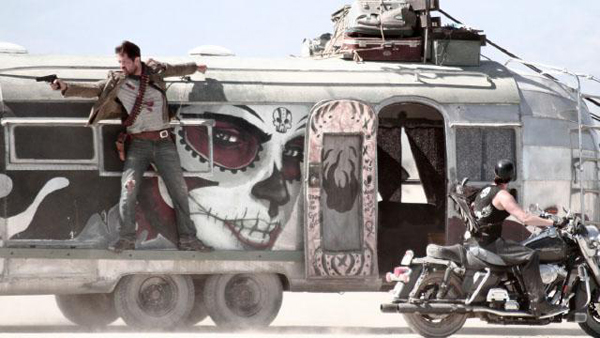 It would probably work better as a pilot for a TV series where its characters and world can be fleshed out in greater detail, but Bounty Killer still offers plenty of gory, desolate futuristic fun, silliness, and some astoundingly good low budget action sequences.

In a world where all white collar criminals have ruined the world and brought about the apocalypse, there exists the titular job: celebrated and idolized killers who bring the greedy to justice. When a past his prime hunter named Drifter (Matthew Marsden) turns out to not be who he says he is, his former protogee, lover, and current ace hired gun Mary Death (Christian Pitre) is tasked with taking him down. She stalks Drifter and his naive, chronically flustered sidekick (Barak Hardley) across the badlands while he tries to clear his name and get the bounty on his head reversed.

The initial set up from director and co-writer Henry Saine (creator of the previous Toronto After Dark entry The Last Lovecraft) suggests a juicy political and economic allegory that it sadly abandons for almost the entire middle hour of the film. It comes back to it at the end, thankfully, by way of cameos from Kristanna Loken and Gary Busey as a pair of corporate lackeys and enforcers, and it wraps up in a satisfying manner.

But during that middle section, it’s clear that Saine has put what couldn’t have been a lot of money where his mouth is. The stunt work is great, and a chase sequence where our heroes have to outrun  band of bloodthirsty gypsies across the desert makes a great impression. It’s very well shot and assuredly edited, which makes everything seem a lot less cheap and a lot more polished than most films of this shoestring genre. It also generates enough charm from its trio of leads to carry it along. I for one wouldn’t mind another film where maybe there’s a bit more money to make a lengthier story. It’s a film that’s definitely onto something, and remains perfectly entertaining even if it doesn’t achieve all of its goals. (Andrew Parker)