This week, we delve into the "not-too-distant-future" of 1997 where deGENErates like us face non-stop discrimination, even when they look like Ethan Hawke and not Alex!

In this week's episode, Mathew and Justin watch Menahem Golan's The Magician of Lublin (1979).

Love the Coopers hits theatres November 13th, but Dork Shelf and eOne films want to send you and a guest to an advanced screening on November 11th in Toronto, Vancouver, Calgary, Edmonton, Winnipeg, Ottawa, Halifax, or Victoria! 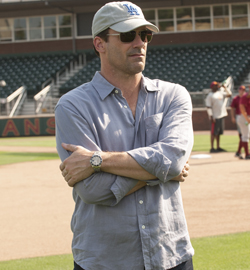 It might be grouchy to complain about Million Dollar Arm, the latest feel good sports drama from Disney, but it’s too astoundingly weak of a film to garner much enthusiasm or find anything really praiseworthy in it.

Enter for a chance to win a pair of passes to an advance screening of Million Dollar Arm in Richmond Hill, Ottawa, Winnipeg, or Richmond (BC) on Thursday, May 8th, courtesy of Dork Shelf and Walk Disney Studios Canada!

Grudge Match is pretty tired and cliched sports movie pablum, but made a lot more palatable by a cast willing to go the extra mile to make their own comedic opportunities.
Get ready for fun and excitement with some old friends out for one final night on the town. Our great summer giveaway weekend rolls on as Dork Shelf and eOne Films have teamed up to give away five copies of STAND UP GUYS on DVD. STAND UP GUYS stars Academy Award® winners Al Pacino, Christopher […]

Enter for a chance to win one of 5 pairs of passes to catch an advance screening of The Incredible Burt Wonderstone in Toronto, Montreal, or Vancouver on Wednesday, March 13th at 7:00pm, courtesy of Dork Shelf and Warner Brothers.

In Argo, the exciting and fast paced third feature for actor Ben Affleck as a director, a silver screen scam job comes to actual theatres with the filmmaker starring as Mendez, whose best plan to rescue the trapped diplomats comes in the form of bringing them together as a fake movie crew under the guise of being location scouts for a big budget sci-fi epic.