Sure, McKelvie, Gillen and Wilson could keep putting out Phonogram forever and I would still buy it, but now that we have The Wicked + The Divine, I have two things to continually look forward to.

Kieron Gillen and Jamie McKelvie have taken lesser-known young heroes from the Marvel Universe and crafted a refreshing, fun, and compelling title in Young Avengers, with this issue being a perfect introduction to their world. 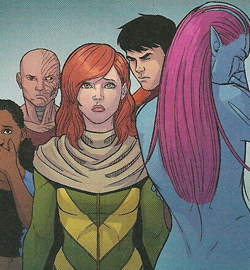 Generation Hope #9 is “the one where we’re using the X-metaphor to talk about teenage gay suicide.” It's not a story where they "deal with" teenage gay suicide, of course; that would imply some sort of satisfactory resolution, if not an outright happy ending.

Uncanny X-Men has been one of my favourite reads ever since issue #500. The creative team-up of Matt Fraction, Greg Land and Terry Dodson has produced a comic run that is just as visually engrossing as the writing is outstanding. #534 was Matt Fraction‘s last issue, and I have been dreading the loss of one of my favourite monthly reads. But fear not X-Men fans, this comic is just as good, if not better, than before.