Comics are wacky, and have been since the start, so finding the ten best romantic moments of all time is impossible. Which is why I’m choosing from the New 52/Marvel NOW era of comics (a.k.a. the past three years or so). Love comes in many forms: romance, sexy fun times, platonically and so much more. Without further ado, here are my top 10 “romantic” moments in comics. Oh, believe me, those quotation marks are there for a reason.

Ah young love. That first rush of inexplicable, unrelenting emotion for another person. Hulkling and Wiccan have been together for a while but in Gillen’s Young Avengers run, they somehow get more adorable while becoming more mature. Their relationship changes as the series progresses, and while it isn’t all roses for these two, their banter and unmistakeable puppy love (but with the potential for lasting romance) easily makes them one of the best couples in modern comics.

Kate Kane may be Batwoman but she’s also an emotional mess. No more than most of us, but reading her romance with Maggie Sawyer was heartbreaking at times. So when Kate popped the question in Batwoman #17 while simultaneously revealing her secret identity to Maggie, it was a “Hell yeah!” moment for love. Because despite all rhyme and reason, even crime fighting vigilantes can find love, which means the rest of us have a chance too.

Adolf and Luna are just two kids among what seems to be an ever growing FF family, but as you might expect from a kid named Adolf Impossible, he has trouble making friends. His dad is kind of a villain and Adolf just doesn’t fit in with the rest of the bunch. Which is what makes the page where he and Luna end up bonding over Marvel Anime (how very meta, Marvel) even cuter. It’s rough being different as an adult, but as a kid it can feel insurmountable. So when Adolf and Luna become friends, you know it’s exactly the platonic bit of love they needed.

Love is weird. And messy. Lust, especially. Clint Barton (a.k.a. Hawkeye, Hawkguy, Pizza Dog’s sometimes roommate) knows that and yet somehow always gets himself back into the same trouble, over and over again. In Hawkeye #8, we’re treated to a full glimpse of Clint’s Doomed Love, without too much snark or judgement tossed his way. Is there anything more awkward that having two exes and a (girl)friend watch you smooch a new gal? If there is, I don’t need to know.

If you don’t love these two as a couple, you have no soul. There, I said it. Alana and Marko are unlikely lovers and even more unlikely parents, and in a series filled with some truly spectacular storytelling, it’s impressive that their relationship is the best part. They’re brutally honest with each other, whether they’re terrified, furious or horny as all get out, and as much as they struggle with each other and with raising Hazel, their love and devotion is never in doubt. Also, they have great sex, sometimes in the middle of nowhere (and sometimes with some unfortunate bystanders).

Oh Tony. Lovin’ em and leavin’ em is your MO, which is probably what made your one night stand with Gamora in Guardians of the Galaxy #4 so damn funny. It’s nice to see a hyper-masculine character like him meet his match, though based on his tender nether regions after their hookup, I’d suggest Gamora won that round (and probably every round she makes). It was a delightfully awkward scene, and a nice moment in comics to show that sometimes sex isn’t what you expected, and that’s ok. Also, that women can and do get their rocks off on their terms when they want to, not just you Mr. Stark.

Anyone that’s read a comic or seen a cartoon featuring Harley Quinn and Poison Ivy knows that there’s been some serious subtext to their relationship for years. So when they share a bed in issue #2 of Harley Quinn earlier this year, there was much rejoicing. It’s an adorable moment between the two, but unfortunately DC is still toe-ing the line on making it canon. Sure, they woke up in bed together and Harley offers to show her beaver to Ivy, but they don’t actually do anything sexual. They’re just really good friends. Uh huh. *wink* 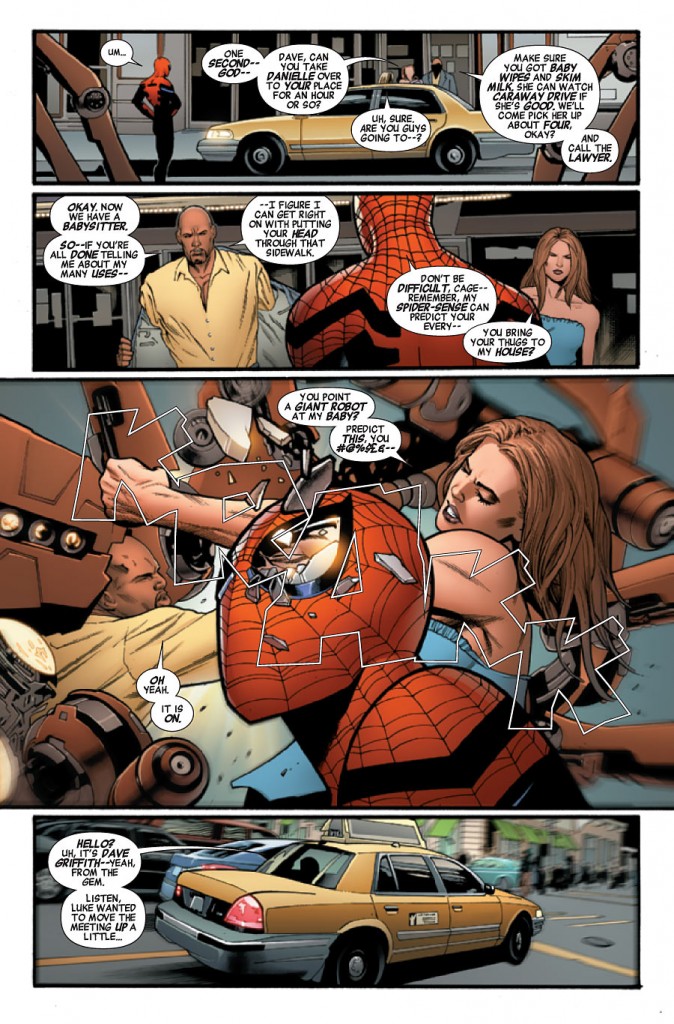 Let’s ignore the fact that Luke Cage and Jessica Jones’ daughter has been an infant for years, and focus on how great they work as a couple. Especially when teaming up to beat the snot out of Otto-Spider-Man when he brings danger to their doorstep. That protective instinct may be one of the most primal instincts humans have, and these two are consistently willing to draw from it to keep their child safe.

I am not shipping the Superman/Wonder Woman hookup. I’m a Lois gal at heart, but that being said, I love the way Soule has been writing them in Superman Wonder Woman. They’re the two most powerful people on the planet (and probably beyond) but they have mostly the same problems everyone else does. Except the occasional beat down of a sun god, which is the scene that won me over. I love how Clark handles the situation, and that Diana understands his motivations for an action that could potentially cause some relationship strife. Plus, you get to see Apollo’s ass handed to him. Win/win.

I’d rather just post entire issues of Fraction and Zdarsky’s Sex Criminals instead of telling you how fantastic they are, but they deserve your dollars. Buy this book. Suzie and Jon are one of the best couples in literature. Full stop. They have their issues but they’ve found each other. Plus they can literally stop time together through mutual orgasm, and somehow, that’s helping them work through it. Oh, and have lots of great sex. While robbing banks. On top of that, they’re hilarious together, and you can feel the elation of finding someone you fit with in every page.

What are your favourite “romantic” moments in comics? Tell us below or on Twitter (@fred42 @DorkShelf).

Next Article »
Your Biggest Game Heartbreak