For a film about such a creative modern day phenomenon as LARPing, Lloyd the Conqueror takes a lazy approach to what could be a very funny conquest.

We talk to Canadian stand-up comedian and actor Darcy Michael about his latest role as a LARPing unicorn in the comedy Lloyd the Conqueror, battling while being a heavy smoker, and his stunning amount of weight loss over the past year. 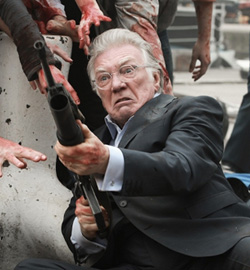 With the final slate of 2012 Toronto After Dark films upon us, we continue our coverage with looks at the zom-com Cockneys Vs. Zombies, the apocalyptic Korean sci-fi flick Doomsday Book, the country splat fest Inbred, the LARP comedy Lloyd the Conqueror, and the zombie found footage sequel REC 3: Genesis.