A celebration of Transformers G1 unlike any other is set to take place this weekend at the Bloor Hot Docs Cinema, with a viewing of the classic 1986 animated film Transformers: The Movie and a performance by the band that's more than meets the eye, The Cybertronic Spree. 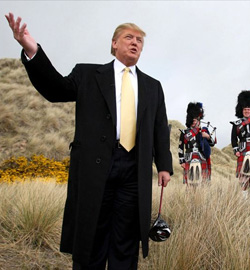 Hello Dork Shelfers and doc lovers! In our neverending quest to help take the piss out of the human gas bag that is Donald Trump, we're pleased to be offering five pairs of tickets to the new documentary You've Been Trumped - playing this weekend at The Bloor Hot Docs Cinema.

It's the end of an era for the historic Bloor Cinema, and the beginning of an exciting new chapter for the Annex rep theatre. Earlier today, Hot Docs announced that it has entered into a joint venture with Blue Ice Film to manage and program the theatre beginning this Fall. The group also plans to revitalize the space by making much needed upgrades to the Bloor's technical equipment; that means new projectors, a new sound system, new seating and more. A major overhaul of the lobby and the façade are also in the works.

This Week in Dork is a new feature that will attempt to encapsulate all of the dorky events happening in and around Toronto every week. Sure, "This Week in Geek" sounds better, but there's a little thing called copyright which prevents us from calling it that. Here are some of the highlights:
Edgar Wright, the man behind Shaun of the Dead, Hot Fuzz and Spaced has made Toronto his home for the time being.  Wright is in town filming a little movie called Scott Pilgrim, based on the eponymous comics set in our fair city.  So what better way to make himself at home than to take […]