Strange though it may sound, Steven Spielberg and Disney never made a movie together before now. That barely seems possible given that they essentially specialize in the same brand of giddy family entertainment rooted in wonderment. Yet, somehow those streams never crossed and it’s odd to think that they finally did for The BFG. The movie unites not just the movie studio most rooted in children’s fantasies and the director who implanted more iconic images in a generation of young cinemagoers than any other, but also one of the most iconic children’s novelists of all time in Roald Dahl. The man behind The Witches and Charlie And The Chocolate factory is a bit too British and morbid for Spielberg and Disney most of the time, but The BFG is the softest and sweetest book on his shelf, boasting the word friendly right in the title. It’s also one of his lesser works and Spielberg’s desire to stay surprisingly true to the source material also ensures that it’s a lesser Spielberg joint as well. Thankfully, lesser Spielberg is still better than most directors at the absolute peak of their powers.

The movies stars one of Spielberg’s favourite tropes: a plucky youngster more attuned to the world than the adults around them. In this case Ruby Barnhill plays Sophie, an orphan snatched up from her bed one night by the hands of a giant. Thankfully, it’s the Big Friendly Giant (see title) played by Mark Rylance. He lives in a land populated by giants who enjoy munching on children stolen from our world. However, The BFG is a vegetarian and the smallest and gentlest of the giants. At first Sophie is a bit miffed by the whole kidnapping thing, but gradually she is charmed by her captor as he shows her how he catches dreams and sneakily blows them into the brains of slumbering humans during the night.

That makes up roughly the first 30 minutes or so of the film and it is by far the best section. The material gives Spielberg the chance to fill the screen with the type of grand, transporting images of wonderment that made his name. The use of scale is impressive. The unrelenting score from John Williams provides all of the spine tingles that he’s known for. Barnhill delivers and impressive grounding performance that proves good ol’ Spielberg has lost none of his special touch with young performers. Yet, the most impressive achievement is the director’s new muse Mark Rylance as the titular BFG. The motion capture performance that Rylance and a team of CGI wizards deliver is absolutely remarkable, enough to make even Andy Serkis jealous. Rylance is a subtle performer who does a great deal with the smallest of facial movements and the effects team capture them all beautifully while still retaining the cartoony design from Dahl’s original book. It’s an incredible creation, perhaps even something of a humanistic milestone in the ever-expanding world of mo-cap performance. Unfortunately, the rest of the movie can’t quite live up to the beautiful opening act.

Aside from slightly toning down the children-munching tendencies of the evil giants, the script written by Spielberg’s late E.T. collaborator Melissa Mathison sticks remarkably close to the source material to the film’s detriment. Roald Dahl was a great writer, no doubt about it. However, his greatest strength were rooted in wordy wit, devilish imagination, and perverse humour. Plotting was never his strong suit and The BFG was always one of his weaker stories. The second act features Sophie and The BFG dodging attacks from evil giants led by the always delightful Jemaine Clement. It’s fine, but repetitive. Mostly it’s an excuse for Spielberg to indulge in some of the massive single take CG action scenes he started in The Adventures Of Tintin and once again they are more technically impressive than actually viscerally thrilling. Then comes a deus ex machine third act involving The Queen that always felt like a bit of a cop out aside from a few great fart jokes (which Spielberg visualizes with style to be fair). For the most part, it’s frightfully British slapstick that Spielberg overdoes because slapstick is one of his great weaknesses as a filmmaker. He’s good at comic relief in genre fair, but not straight comedy and much of the final third of The BFG recalls the hit n’ miss excesses of his 1979 flick 1941. It’s well staged technically, just not particularly funny. That’s a problem and brings the movie to a close on a down note.

Still, while The BFG might sag a bit and stutter to a stop, that actually makes it an honest adaptation of the source material. It’s hardly a bad film, just one that doesn’t quite add up to the sum of it’s considerable parts. When the blockbuster works, Spielberg serves up magical imagery that truly transports viewers and proves how little imagination and cinematic talent makes it into most massive CGI blockbusters. Those sequences pop up regularly and whenever Spielberg gets a chance to tug on the heartstrings, the big dopey cartoon offers surprisingly emotional heft. It’s a delightful bit of family entertainment, just one that isn’t as funny as it thinks it is or particularly narratively satisfying. It’s a shame Spielberg wasn’t more liberal in his adaptation, but chances are he felt to indebted to the memories of both Dahl and Mathison to mess with the script. Or maybe his heart just isn’t in this brand of mass entertainment as it once was. 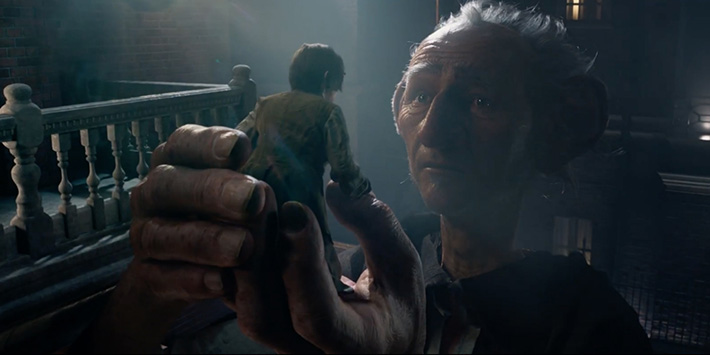 While The BFG might be one of Spielberg’s lesser movies, the Blu-ray presentation doesn’t disappoint in any way shape or form. The magical digital world pops off the screen in blinding colours and intense detail. It’s all very stylized and deliberately cartoony, yet executed with craft and care on a massive scale. It’s comparable to his beautifully imagined world in Tintin, just with darker crevices and less whiz-bang adventuring. The sound is booming and majestic, with Williams’ whimsical score filling out all the speakers. The movie may underwhelm at times, but the Blu-ray presentation is never short of astounding.

Special features are sadly more of a mixed bag. As usual, there’s a making of doc by Spielberg’s DVD buddy Laurent Bouzereau. The man has done some amazing in-depth docs about Spielberg productions in the past, but sadly this isn’t one of his best. Sure, there are some great interviews with Spielberg and his production team about Roald Dahl’s legacy (and his brief dance with a Disney feature about gremlins) along with some fascinating behind the scenes footage of the grand digital production. Unfortunately, there are only snippets of these things and most of the doc is dedicated to a production diary with young star Ruby Barnhill. It’s all very sweet and cute and a provides a nice child’s eye view of modern blockbuster production. But that should have been it’s own featurette with a proper doc about the movie included separately. Oh well. To fill in the gaps there are a couple of brief featurettes on the giants and production design that are breezy and over far too quickly. Toss in a couple of child friendly featurettes about the BFG world and a nice, heartfelt tribute to Melissa Mathison. Unfortunately, it’s all too brief and is about as underwhelming as the film itself can feel. Still, the disc is beautiful and the movie is worth it for the extended sequences that recapture that old Spielbergian magic.

The BFG Blu-ray is recommended for Steven Spielberg and Roald Dahl completists as well as parents who want to introduce their children to both magical imaginations in a soft and comforting package.