It’s one of the big open secrets amongst horror fans that there is only one Exorcist sequel worth exploring. John Boorman’s Exorcist II is one of the most embarrassing failures of the 70s and the less said about the two different versions of Exorcist IV the better. However, in 1990 William Peter Blatty took back the franchise he created as both novelist and screenwriter to deliver one deeply strange and unexpectedly satisfying follow up to the greatest horror film ever made. It was a loose follow up entitled Legion about the detective from the first movie pursuing a serial killer possibly tied to possession. Studio influence forced a somewhat silly exorcism sequence on the end and an official “Part III” in the title. It failed at the box office, but a cult of appreciation slowly grew over the years.

Set a few years after the original movie, George C. Scott steps in as a Lt. Kinderman pursuing a vicious new serial killer named Gemini that leads him into a mental institution where he finds a priest who appears to be possessed by a particularly pesky demon. It’s an odd film and even with the studio-mandated inclusion of an exorcism climax and the presence of Jason Miller to tie things into the original movie, is a very unconventional sequel. Blatty directs with confidence and delivers some genuinely terrifying scare sequences (including one brilliant jump scare that’s become justifiably famous). Yet the tone is odd, freely bouncing between genres like Blatty’s oddball The Ninth Configuration. The film is often oddly funny, mixing in strange humor with suspense and dread.  It works well, just feels like an strange duck of an Exorcist movie even with all of the forced connections to the original movie.

It’s not surprising that critics and audiences were put off by The Exorcist III in 1990. While the original movie is unconventional, it’s also undeniably terrifying for most of the running time. Exorcist III has some big scares, but it’s a far more unconventional experience than the typical horror movie. It’s the sort of thing that only appeals to a certain strange subset of viewers who appreciate all of the bizarre diversions and ambition that Blatty shoved into the movie as much as the scares. Even in a compromised form that Blatty was never satisfied with, Exorcist III is a fairly fascinating exploration of the franchise well worth seeking out for those who enjoy the odd and unusual as much as a good ol’ spinning head scare. 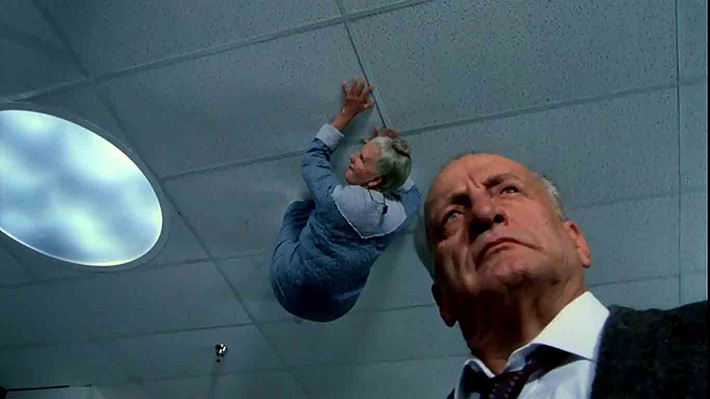 Warner Brothers cleaned up Exorcist III for a barebones Blu-ray included in a box set a few years ago that was fine, but Shout! Factory have put some extra work into making this a definitive edition. Colors are vibrant and details run deep. Blatty always delivered a well-crafted film, but this edition really shows off what he accomplished. The lossless surround track is filled with all of the bumps and creeks and morbid sound design one would expect form a horror movie. Unfortunately the flick has that dated 90s quality of the quiet scenes playing too quiet and the loud scenes playing far too loud in a cheap attempt to manufacture extra scares. But hey, that’s just how the flick was made.

Where this release truly shines is in the special features, kicking off with a long awaited Legion director’s cut that William Peter Blatty has desperately wanted to reassemble since the 90s. There’s good news and bad news here. The good news is that the Legion cut is fascinating. There’s a very unconventional structure to the first half of the movie designed to keep viewers off balance. Brad Douriff plays both the Gemini Killer and Father Karas in this version and his performance is dementedly wonderful, pulling off both roles with ease. The ending is also completely different, with no exorcism and a rather abrupt finale that has its own mysterious charms. The bad news is two-fold. First the footage of the excised material was long since lost, so the movie frequently jumps into poorly restored VHS material to include lost scenes. It’s not exactly ideal, but hey at least we can finally see Legion. The second bit of bad news is that unfortunately this director’s cut doesn’t reveal a lost masterpiece. Silly though many of the studio additions were, Blatty still shot them with style and they do add intensity to the movie that’s undeniable. The original cut is just as baffling at times in different ways, but not nearly as intense. Oddly enough enough the Exorcist III cut might be the best version after all. Still, god bless Shout! Factory for including the Legion cut even in this deteriorated form because fans have been desperate to see it for years and it was starting to feel like it might never happen.

But wait! There’s more! The first disc (with the theatrical cut) features a variety of vintage features including a blooper reel (for real) and a vintage EPK (just as dull as you’d think), and a strange black and white opening that takes place immediately after the original Exorcist that was worth cutting out but is fascinating to see. Then there are no less than 40 minutes of vintage interviews from the set featuring all the major cast members and filmmakers. They are surprisingly in depth for promo clips and amusingly honest. Toss in some old trailers and TV spots and you’ve got a disc that would be immensely satisfying to fans of this cult oddity. But wait! There’s more!

The second disc featuring the Legion cut comes with it’s own stack of freshly produced features from Shout! First off is an audio interview with Blatty that plays over Legion. It’s not scene specific and spends far too much time on Blatty’s backstory and the original Exorcist, but when the director finally gets into this specific movie, things pick up dramatically. Next up comes a 24-minute documentary about the making of Exorcist III featuring a handful of surviving cast and crew members that starts with a worthy bashing of Exorcist II and then gets into some loving remembrances of the shoot, particularly working with Blatty and Scott. After that Brad Douriff gets his own 18-minute interview describing his unique involvement in the movie that was mostly cut out and the challenges of working with Jason Miller (who had a hard time even remembering his dialogue due to alcoholism). Next up comes an 18 minute documentary on the film’s design, a 15-minute documentary on the score, and best of all a 30-minute doc on the studio imposed reshoots which the participants all have wildly different opinions about (surprisingly enough, not all of them are negative).

Whew! So that’s a hell of a package for a horror sequel that most folks have ignored over the years.

For those who love the film, there’s so much here to discover. For those who have never seen this deeply underrated threequel, there’s no better introduction than this Blu-ray. This is one hell of a release from Shout! Factory for a film with a fascinating backstory that deserves it. Go ahead and buy it already. There’s no better Halloween treat hitting shelves from the movie gods than this.