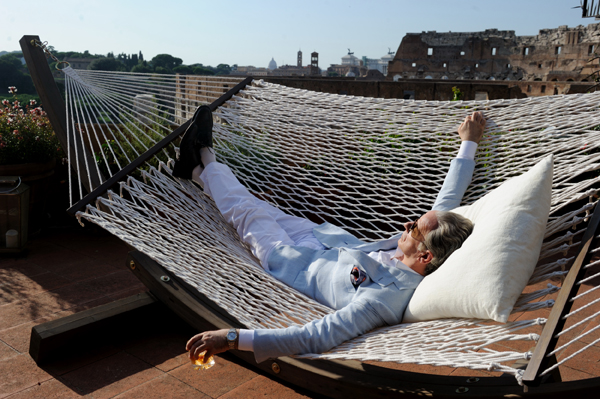 Italy is a country that has been suffering economically for some time now. It’s potential to keep a youthful workforce is being constantly damaged because young people simply don’t see a future staying there. It’s something that the country should be concerned with addressing, but filmmaker Paolo Sorrentino’s insidious and inexplicably lauded paean to arrogance, The Great Beauty, it seems like the old folks just want all these people who could modernize their country to get off their lawn and go somewhere else if they don’t like it. It’s sickening, disgusting, and backwards thinking that certainly looks sumptuous, but is as thematically empty as the existential malaise it’s protagonist experiences. In short, it’s everything currently wrong with Italian cinema boiled down into a singular noxious concoction.

Journalist and one-hit-wonder novelist Jep Gambardella (Toni Servillo) seems to be growing bored of not only covering socialites, conceptual artists, and religious figures for the public interest. He also seems to be tiring of being a socialite himself. The only things to ever inspire him in life are now gone, and he has spent the majority of his life looking for “a great beauty” that may or may not even exist. He has never found a real love, only intimacy; never inspiration, only those who wish to speak only of themselves.

The problem with Jep’s existential quest is that neither the character, nor Sorrentino are able to reconcile that Jeb is actively everything he hates; something akin to a modern day, Eurpoean Hemingway minus the talent, charm, and ability for active self-reflection. It’s a film about boredom made by someone that’s angry about being bored. It’s almost no surprise that Sorrentino’s biggest successes were films that were set anywhere else but Italy. It has to be because Sorrentino has absolutely nothing of consequence to say.

Great Beauty settles into its episodic and brutally long “plot structure” quite assuredly, but when every story comes with some sort of snide sarcasm about how it’s boring to be rich, but it’s better than being poor and happy (especially in a subplot involving a saintly nun Jeb is trying to coax a rare interview from), there’s never any reason to care about the beauty around these people. Sorrentino’s only trick to try and keep the audience interested is by staging elaborately hollow party sequences imbued with a quirky sense of irony and extremely slight characters designed to hopefully make Rome seem like a place of wonder and enchantment (a friend’s stripper daughter, Jeb’s midget boss).

Maybe an episodic look at the lethargy of the bourgeois could work if the filmmaker seemed at all interested, but the real underlying problem with Sorrentino’s work is that he skews far too old. This is a man who wants the glory days of wine and song and drinking all night with beautiful naked women who don’t know the meaning of the words “sexual assault” mean. Never once does Sorrentino ever actually look at why his country is in the crapper on a global scale because he’s far too willfully engaging in the kind of conduct that led it there in the first place. This is a man for whom the world is built for the old and that the young need not apply. He’s perfectly content with letting his country just sink into the ocean until his generation dies off. There’s nothing to offset his rampant ego or reign it in enough to feel like a valid text about a man experiencing a major life crisis.

It’s just a movie where things happen, and by the end of it when you realize they will just continue to happen as they were, it feels like a complete waste of time. It may be up for Best Foreign Film at this year’s Oscars, but it’s one of the most undeserving Oscar nominees in any category ever. It’s positively toxic and reprehensible trash under the veneer of class and dignity; worthless if not for the cinematography. Sorrentino plays the part of a man who thinks he has found a solution to the problems of the upper class without realizing he is a huge part of the problem.

Next Article »
The C_ntrollers: Bioshock Burial at Sea