The Heat Review - That Shelf Skip to main content 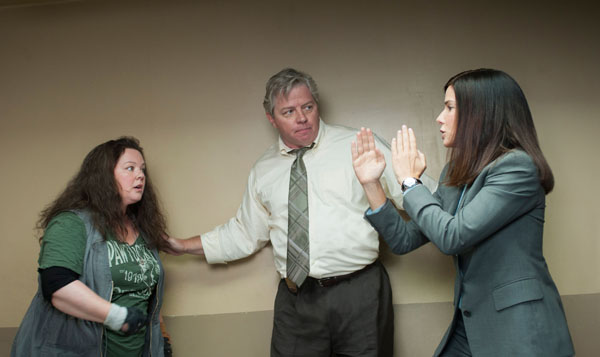 The Heat is a decently entertaining, if entirely formulaic, genre comedy that had somewhat astoundingly never been made to this point in this decent of a fashion. Few buddy cop comedies have ever dared to cast two women in the leading role (maybe none this notable since the box office dud Feds back in 1988), but with Paul Feig (Freaks and Geeks, Bridesmaids) directing the likes of Sandra Bullock and Melissa McCarthy, it all goes down relatively easy, hitting the sweet spot for those nostalgic for the likes of Beverly Hills Cop and the Tom Hanks/Dan Aykroyd Dragnet reboot. It’s not a great film, but it serves its purpose with a great deal of energy, wit, and love for its target audience.

Straight laced NYC FBI agent Ashburn (Bullock) is a workaholic hated by her co-workers. She doesn’t swear, lives relatively clean, seeks solace in her neighbours’ cat for company, and when she’s right about something she can’t help but throw it back passive aggressively in the faces of those around her. She’s sent packing to Boston by her superior (Demian Bichr) not only to track down a ruthless drug kingpin that’s been offing snitches and the competition in disgusting, grisly fashion, but to also prove she’s worthy of a promotion. Almost immediately, Ashburn runs afoul of curse spitting, slovenly vice squad officer Mullins (McCarthy), who doesn’t take kindly to the feds snooping around her neighbourhood. Mullins refuses to back down thanks to the case having a connection to her own family, and eventually the mismatched duo has to put their laundry list of differences aside to work together.

It sounds like, and indeed is, pretty standard stuff, but Feig and company work in some nice bits of genre subverting subtext without changing the playbook. It never once matters that the leading ladies are women except when they’re badgered by a rival (and albino) DEA agent who can dish out misogyny, but can’t take a ribbing himself. There’s even a token assistant to Ashburn (played by Marlon Wayans) that in other films would be the token, stereotypical female role amid all the machismo. Mullins also gets to play the protective sisterly role opposite of a pretty great Michael Rapaport, making sure he doesn’t backslide into a life of crime again. Feig and writer Katie Dippold (best known for her work on Parks and Recreation) are clearly just having a good time and not concerning themselves too much about making a statement or being self-conscious about the material.

Bullock has essentially played variations on this character before in the Miss Congeniality films and Demolition Man, but she seems to be having fun easing back behind a badge. Despite her obvious comedic and dramatic gifts, it’s kind of a shock that she never really got offered roles like this more often. Maybe she just doesn’t get material and this level of talent to surround her.

McCarthy is the perfect foil for Bullock and their chemistry is positively off the charts. Her Mullins might think she’s a badass, but she’s really just an asshole that’s passionate about her neighbourhood. Take away the badge and she’s practically just a sarcastic vigilante. With a spot on Boston accent and an acid tongue, she commands the screen so much that it’s of little surprise that the only thing Mullins and Ashburn can agree on is a shared love of guns and ammo.

Bullock and McCarthy put the film under their arm and run with full effort even through some of the films more forced gross out gags (including a bizarre, left field stop to give someone a tracheotomy) and some choppy editing that suggests a considerable amount of reshoots and cuts were necessary at some point in the production. It all holds together, and fans of the genre that have been waiting for something like this won’t be disappointed.