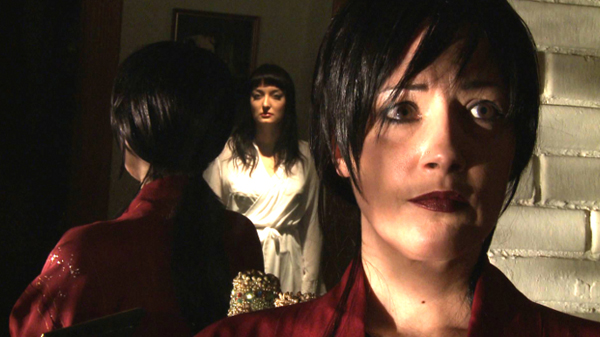 It’s hard to think that there could be a more egotistical local based production to make its way to a repertory cinema this year than Bruce Pittman’s The Last Movie. The veteran television director (also a former owner of the Revue Cinema and the man behind Hello Mary Lou: Prom Night II) thinks he’s creating an old school European noir film, but what he ends up with is an insufferable, overlong mess that feels more like a lecture from a scorned filmmaker than anything else. What’s worse is that the lecture is shallow, hollow, pedantic, and most unfortunately of all, not interesting in the slightest.

Pittman wrote, directed, and stars in this needlessly two part film that starts off by telling the story of a filmmaker (Pittman) tasked with remaking an artful Russian noir on the cheap with his producer constantly hounding him to sex it up a bit from the original text. His own personal trepidations towards doing the material justice give way to a different story, however, when he casts his leading lady (Elizabeth Gondek) and the script’s power causes her to gradually lose touch with reality.

That’s the best description that can be given of the plot since the reality is far messier. It’s strange that the 62 year old Pittman, who admittedly financed the film “outside the boundaries of traditional financing,” would dare to take up the first half of his own film essentially giving young whippersnappers an “education” in noir history by forcing them to watch him take pointless notes and stack books on famous filmmakers for an unconscionably lengthy shot (dwelling needlessly on Antonioni at the end when nothing in this film is even one billionth as good as his work) before going into a dream sequence where he dreams of the disembodied heads of Orson Welles and John Ford. It’s essentially a bitter filmmaker telling the viewer his influences as if he were making a student film, and not a particularly passable one at that.

To make matters worse, during the entire hour long set up before the film even bothers getting around to the actual production it’s supposed to be about, Pittman also unconvincingly shows the audience almost the entirety of the film he’s supposed to be remaking with actors that don’t look so much like period appropriate noir types, but people he just pulled off the street and put into shots he could try to mask with black and white colouring and extreme blue filters for that added bit of non-mystery to cover up how recently it was all shot. (Shout out to the bottle of Prince Igor vodka in one of the old timey shots.) On ANOTHER level the first hour also deals with a young documentarian trying to shoot a film about the making of the film within the film and even then Pittman can’t seem to shut up as he talks over Final Cut Pro footage of said doc just to explain how bullshit the notion of docs about films are.

Quite bluntly, Pittman has to be deluded to think that his entire audience will be made up of young morons who will suddenly be snapped out of their traditional ADD methods of thinking or kindred old souls who remember how things used to be before the internet. (Side note: The film features online chats on Macs that sign on and off with green and purple swizzly static because, that’s how these things work. YOU OWN TWO MACS VERY CLEARLY, BRUCE, AND YOU SHOT FOOTAGE OF THE FILM LITERALLY BEING EDITED ON ONE. How stupid do you really think your audience is?) To be fair, there is a certain degree of admiration that can be given to a filmmaker who wants to rail against the glut of remakes we face everyday and to take a look at ageism in the industry. These are interesting things to talk about when there’s a healthy dose of humility to offset the anger, emotion, and personal nature of the story.

There’s not a shred of humility to be found in the entire first hour and ten minutes of this horrid vanity project that comes under such a noble guise. He seems to fancy himself as a sort of late period Goddard at this point in his career where he can rail against everything that rankles him and write it off as art. He can’t, and the fact that he spends 70 minutes spinning his wheels talking about himself with no real pretension of fiction is preposterous and sad to watch. It’s disingenuous for all of its personal emotion because Pittman is just being a bully about everything the audience sees. He’s also a terrible actor, constantly trying to not look into the camera even when he clearly wants to break the fourth wall and always gesturing with his hands awkwardly like Ricky Bobby in Talladega Nights. Watching him write such thoughtful notes as “Build tension!” (which he doesn’t do), “abrupt cuts” (which he might do since it’s hard to tell just what the intention of assembly here is), and “SOUND!” (which sucks) only serves to literally underline that Bruce Pittman thinks the only valid filmmakers today are Bruce Pittman and anyone he ever read about in one of the many books he so clearly owns.

It’s hard not to feel especially bad for Gondek, who actually does the best she possibly can in a role that isn’t allowed to be developed in the slightest because Pittman took up all the screen time that should have been spent as we watch her breakdown. We’ve already seen the original film in almost painful detail and there’s never any indication why her character should become so obsessed with this role that it will eventually lead to a psychotic break that Pittman doesn’t seem interested to film by that point. It feels like an entire act to her story is missing to give room for Pittman’s sonorous lecturing of the audience.

The Last Movie reeks of old guard filmmaking in the worst way possible. The second half of the film had to be the production Pittman got burned on at some point in his career, and the first half is just a bitter person shouting to the rafters and anyone who cares that he got shafted. It’s cantankerous and off putting when it should be reverential or relevant by way of an actual history lesson. He can cite as many neo-realist and post-modern filmmakers as he wants, but viewers would be best advised to read about them instead. Or better yet, watch one of their films instead of ever going near this one.