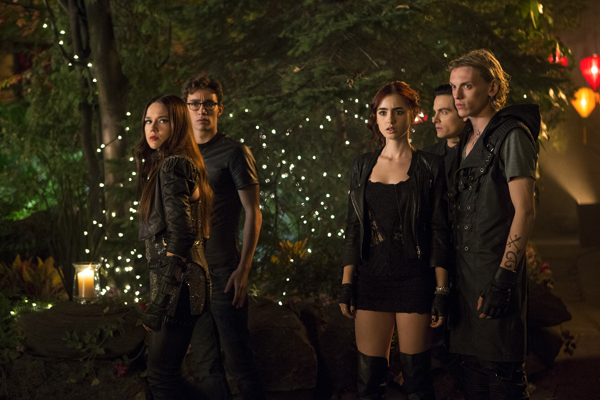 Pitched somewhere between a Twilight styled romance and a Harry Potter-like fantasy, the successful and lucrative The Mortal Instruments series of novels from author Cassandra Clare was bound to see its way to the silver screen at some point, and thankfully for the first entry, City of Bones, the results are much more entertaining and far less derivative that one might expect on passing glance. This story that juggles doomed romance, mysticism, betrayal, friendship, and some stuff about werewolves and vampires thrown in for good measure is certainly a hodgepodge of everything hot and hip today for the kids, but at least it all comes with a brisk pace, knowing wit, good performances, and a set-up that never talks down to its core demographic by pandering to basic adolescent needs.

Clary Fray (Lily Collins) has just moved to Brooklyn with her mother (Lena Headey). In one of the best bid for efficiency any franchise could make, it’s obvious that their very moving is happening under suspicious circumstances and that mom has a secret that’s about to come bursting out. Clary has begun seeing people who aren’t really there and constantly drawing an archaic rune both consciously and unconsciously. One day, her mother is taken by a pair of demons disguised as humans and she’s introduced to Jace (Jamie Campbell Bower), a heavily tattooed Shadowhunter well versed in the art of fighting all manner of nasty creatures. Her ability to see Jace in the first place suggests that she isn’t fully human, herself. Clary and her best friend (who harbours a lifelong unrequited crush) Simon (Robert Sheehan) follow Jace to a hideout of other Shadowhunters to figure out what’s going on and to retrieve a chalice that could either hold the key to saving her mother, or severely pissing off the evil Valentine (Jonathan Rhys Meyers): a former Shadowhunter driven mad by his desire to create a pure blooded race.

Naturally, there’s a love triangle set against this fantasy, but it’s one that bucks the usual heteronormative trends of blockbuster filmmaking. Instead of another girl entering the picture to get between Jace and Clary, there’s Alec (Kevin Zegers), a more impulsive and emotional hunter who feels threatened by Clary thanks to his deep feelings towards Jace. In this film, it’s obvious that Simon is just kind of like Ducky from Pretty in Pink, only with less to do outside of taking the most physical damage and getting in one really big, heroic moment. There’s also another female hunter (played by Jemima West), but she’s somewhat negligible in this outing. It’s refreshing that the film can be this progressive, but it also comes kind of handcuffed to a structure that only allows key details for the main characters to come through rather than a richer portrait of who these people actually are, what they do, and how they operate.

It’s admirable that writer Jessica Postigo and director Harald Zwart want to focus on the characters in relation to one another, but for people who aren’t familiar with the books, the lightning fast start to the film might lose some people instantaneously. And yet, that’s part of the charm. City of Bones might be the most honest piece of art made expressly for fan service. Zwart’s direction is brisk, assured, and devoid of anything that isn’t absolutely essential. It isn’t a film with a huge budget, so if it’s not something that needed to be there immediately, it seems to have been cut. It hits the ground running (with the characters literally running mere minutes into the film) and never looks back.

Not being as familiar with the book as most would be, everyone seems to be a great fit for their part, and more importantly it seems like they’re all having fun with their on screen personas. Collins’ Clary is a likable heroine who isn’t a sullen mess and has justifiably good reason to be miffed at her situation. Bower doesn’t get very much to do as an actor other than be a bigger basket case than Clary, and yet his performance is appropriate and gets more refined as the movie adds layers to him. Sheehan’s a natural born charmer, making him a great BFF. Zegers does a fine job acting irate and suspicious all the time. Jared Harris shows up as the leader of the young warriors, and while he’s essentially just the narrative exposition device (and one other obvious thing that can be seen coming from far off), he still gives the film some gravitas. Meyers simply coasts by doing pretty much the same thing he did in The Tudors, but it works here.

It’s just a shame that when this modestly budgeted fantasy begins to  get to the big action set pieces instead of individual fights that the film starts to falter and feel repetitive. It gets a bit duller as it goes, leading eventually to a potentially ludicrous and ill explained twist cribbed wholesale “from a galaxy far, far away.” It doesn’t sour anything, and since the rest of the film feels genuine enough, I can really only speculate and assume that it’s being faithful to even the flaws of its source.

And yet, I still have no real drive or desire to ever read one of the books, which might be seen as a sign of failure, but I can’t see it as anything else aside from a sign of adequacy. I saw the movie. I was entertained by parts of it, and I certainly didn’t dislike it. It will probably stick around in my memory just long enough to understand what the next movie will be about when that one gets released in the near future.