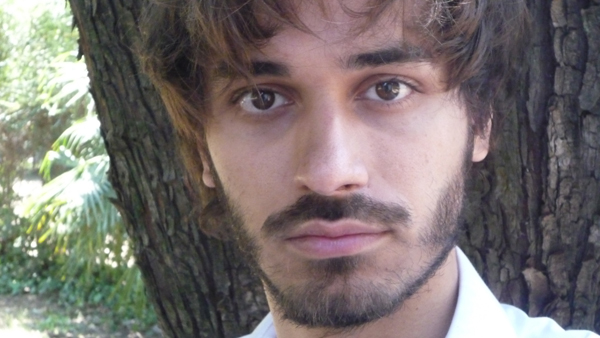 It’s quite telling that one of the most striking images in young Argentinean filmmaker Matías Piñeiro’s debut feature is that of an ornate ceremonial dagger being smuggled out of a museum within the pages of an equally classic book. With a dazzlingly brilliant eye for visuals and a deep love for literary subversion, Piñeiro can deftly pay homage to the cinematic and literary greats before him by showing precisely what he learned and putting it to brand new use. He’s a student of the game who has himself become a master of gamesmanship. For his first TIFF Bell Lightbox retrospective, Divertimentos: The Films of Matías Piñeiro (starting  this Thursday and running through Sunday) the 31 year old graduate of his home country’s famed Universidad de Cine will be in attendance as all four of his thematically and visually rich fictional films will be screened for audiences that are still sadly unfamiliar with just how major of a talent he is. 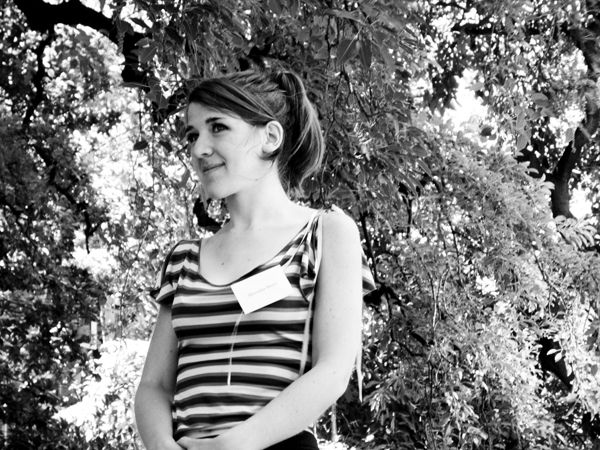 Following work on a student sourced documentary, Piñeiro’s career really begins in 2007 with The Stolen Man (Friday, April 4th, 6:30pm) which was produced one year after his graduation from university. Inspired by the work of 19th Century Argentine writer, activist, and former president Domingo Faustino Sarmiento, Piñeiro takes a look at a young student reaching the end of her education and trying to make sense of the tangible pressures of school (studying almost to the point of madness), the orbiting problems of impending adulthood (mounting debts), and the intangible troubles of love that begin to rear their head while passing between life cycles.

Piñeiro has chosen for his first film a very loose adaptation of Sarmiento’s Facundo: Civilization and Barbarism, which is already a playful bit of creative nonfiction that had garnered such high praise as routinely being called one of the greatest works ever produced by a Latin American writer. Ostensibly a book about trying to free oneself from tyrannical rule by examining barbarism within civilized society, it’s not exactly something that could be filmed as it appears on the page. Instead, Piñeiro tells the story of a young woman named Mercedes Montt, a student who ten days before exams start becomes obsessed with trying to find out if her best friend’s fiancée is cheating on her. The story has very little itself to do with Facundo, but on a theoretical level, it aligns perfectly with the original author’s fears about stagnancy, dishonesty, and loss of a learned history.

It could just as easily be called “Thoughts on a Liberal Education” and no one would be the wiser, but Piñeiro has imbued every gorgeously framed black and white shot of his film with the spirit of Sarmiento. At the same time, the dialogue also speaks to the writer and director as a very smart man who remembers all too well how difficult it is being a student. His dialogue feels akin to that of a great observational humorist, like when a character says that a classmate should pick a more obscure topic in the hopes that the teacher doesn’t know as much about it or how Mercedes refuses to finish a book because something awful always happens on a personal level when she does. It’s a vibrant and erudite look at young people told by a young man with the heart of a true classicist. It’s not a misdirection early in the film when Mercedes is seen abusing her low paying job as a museum guard to smuggle out artifacts for cash, but a bold authorial statement: I am here to steal from the past to pay for my future.

But the allusions don’t merely start and stop with the constantly namedropped Sarmiento. There are shades of Shakespeare (who we’ll get back to in a moment), Louisa May Alcott (whose Little Women provides almost a Rosetta stone to looking into Piñeiro’s predilection to use female protagonists).Cinematically, Piñeiro is pulling from just as deep of a well, bouncing between Bresson, Godard, Woody Allen, and Chris Marker. It’s of little surprise that Piñeiro would choose Bernardo Bertolucci’s novelle vague classic Before the Revolution as his Carte Blanche selection from another filmmaker (screening Thursday, April 3rd at 6:30pm). That film, and Bertolucci’s love of cinematic pastiche would be the perfect primer to get audiences acclimate to the style and authorial intent Piñeiro is laying down.

The film actually marks the first of three major collaborations for Piñeiro as a filmmaker, with the most obvious being the long since departed Sarmiento, who would also provide the inspiration for his follow-up They All Lie (Saturday, April 5th, 7:30pm). Following The Stolen Man, Piñeiro will continue to use actress María Villar in major roles, and it’s easy to see why. Villar is an extremely capable and analytical actress deeply attuned to Piñeiro’s rhythms. A lot (well, maybe not a lot but whatever is out there that has been written about him) of film writers pick up on Piñeiro’s tendencies towards placing his women front and centre and his male characters a bit more in the background, but it’s obvious from the first frames of The Stolen Man that Villar isn’t just a muse for Piñeiro, but the author’s most direct on screen surrogate. She will always play the person going through the biggest struggle or doing the hardest analysis of everything around her.

It also marks his first collaborative effort with cinematographer Fernando Lockett and it’s an exquisite match that runs like clockwork. Constantly favouring long takes where sometimes the focus of a scene will drift, Lockett is able to zoom in on whatever Piñeiro really wants to audience to focus on. It’s a brilliant visual gambit for a film that revolves around characters that are almost too constantly frazzled to pay attention to what’s going on in their own lives. The soundtrack could be telling something completely different from the image, but the image takes over from the words. Sometimes the focus is on the person talking before casually drifting to the listener or to some point off in the distance.

Together, Lockett and Piñeiro are also masters of staging almost elaborately theatrical sequences told through motion and framing. It’s somewhat evident in Stolen Man in scenes where Merecedes stalks people in a quest for answers (with one character framed in one corner and another in the exact opposite and they keep moving without ever really leaving the shot), but it’s put to dizzying extremes in They All Lie. 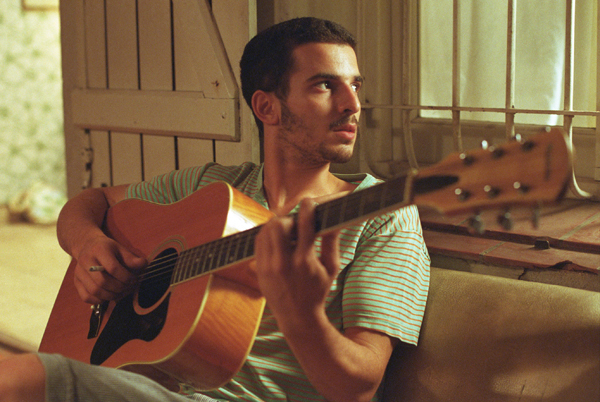 Following a group of young male and female artists (painter, filmmaker, writer, etc.) as they hang out, drink, smoke, hook up, and generally become mistrustful of one another, Piñeiro and Lockett create a visual and literary pinball machine. A constant stream of comings and goings and eavesdropping in motion, people are always ducking in and out of the frame to signal shifting alliances and feelings between what at first seems like a tightly knit group of friends. Characters will pace back and forth in front of the frame carrying on a conversation, while something potentially more important happening once again in the background.

It’s a natural extension of his previous work, albeit this time in colour, some jarring edits designed to throw the audience into a state of misalignment akin to that of the characters, and a far less stringent adherence to Sarmiento as a source material. Here he musters homages to Welles’ F for Fake, Hitchcock, late period Godard (especially with metatexual exchanges like “What are you looking for?” “A hook.”), Beckett, Camus, Brecht, and through the literal comedic use of a Chekov’s gun. It’s far more dizzyingly broad minded and it bears one heck of an amusing punchline for those what can keep up with its own special kind of kinetic, intellectual energy, and probably the best film of his career.

But what They All Lie probably most closely resembles is a modern retelling of The Bard’s A Midsummer’s Night Dream, only in this version no one is particularly star crossed but everyone is with the wrong person. It’s no surprise then that for his most recent efforts, Piñeiro would turn directly to the world’s greatest playwright.

It might be because it follows his most assured film or because it was part of a larger project, but the mid-length short film Rosalinda (which screens prior to the series’ closing film, Viola, on Sunday night at 5:30pm) feels like a bit of a letdown. It’s not a bad film in any way, but it feels a bit like a missed opportunity that’s more bound to conventional form than an expansion on an admittedly great idea.

In Rosalinda, Villar returns as a young actress on a cottage retreat along the Tiger River with her acting troupe as they prepare for a production of As You Like It (which itself was quite nicely referenced back in The Stolen Man). Just before they start a wild paced run through of the show (followed wonderfully by Lockett’s wonderfully fluid camerawork), she has received a call with terrible news. The “show,” however, must go on.

It’s a well made lark with some clever touches, especially by way of having one of the actors be really terrible and the emotional weight that lands as soon as the run through is over. It ends with an uncomfortable nighttime improv game around a table that’s both perfectly executed, but that also hints at what the film could have been if it didn’t have such a massive text dump in the centre of it dampening Piñeiro’s playful style.

He gets back on track in a big way with 2012’s Viola, a reworking of another great Shakespearian comedy, Twelfth Night, which became as big of a success in North America as he’s had thus far. But more than just gaining a bit more notoriety north of the equator, it feels like an amalgamation of all of his previous work put together into an infectious concoction. His lead character (again played by Villar) is once again less than reputable when it comes to business (slinging bootleg DVDs with her boyfriend), but here she finds herself dragged into a world of romantic and existential paranoia akin to that in The Stolen Man and They All Lie, precisely by getting brought into the world of an all female acting troupe who want to do Shakespearian mash-ups.

In some ways, Viola plays a bit too much like a greatest hits collection that openly acknowledges Piñeiro’s love of pastiche, but that doesn’t dampen the fun of watching it unfold and it doesn’t make the film’s other abundant literary references any less pointed or meritless. It’s a great film in a career made of great and vital work that no one else is even attempting. It will be interesting to see where the next film in his planned Shakesperiada goes (the upcoming The Princess of France, which will tackle Love’s Labour’s Lost). It certainly seems like these films are just the groundwork for a much greater career yet to come.