To celebrate TIFF’s upcoming Bangkok Dangerous: The Cinema Of Nicolas Cage series, Alan Jones has resurrected his retrospective of the actor’s work entitled The Nic Cage Project. In this edition, Jones takes on 1983’s Valley Girl – playing tonight at the Lightbox. 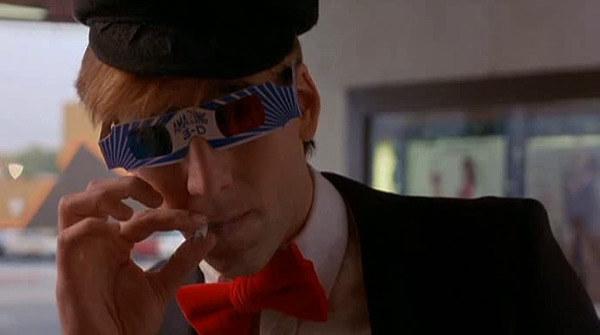 “Who the fuck was that guy, huh? I was doing alright with that chick! Who the fuck does he think he is?”

“Maybe he was her boyfriend

“Nobody is gonna tell me who I can score with! Now I want this chick and she wants me, so fuck it. We are going back.”

The year is 1983. Julie (Deborah Foreman) is a good girl from the Valley, who dates jocks and wears lots of make-up. Randy (Nicolas Cage) is a punk from Hollywood, who smokes cigarettes and listens to New Wave music. Will they fall in love, or will they’re socio-economic differences tear them apart? How will these two lovebirds conquer the vast cultural differences of those two famed Los Angeles suburbs? With the Power of Cage. It’s like the Power of Love that Huey Lewis used to sing about, but better. Trust me.

But really, who is the Cage competing against? Some hunky “Val Dude” named Tommy (Michael Bowen)? Pshhhh! Besides, Tommy’s a jerk. When Julie dumped him, he totally hooked up with Julie’s bestie Loryn (Elizabeth Daily). Like, whatever, Tommy. You think you can compete with Nicolas Cage, with his weirdly coiffed punk hair and his pretty good taste in New Wave music? All he has to do is talk to your girl, and she’s smitten like an oversexed glove mitten. Soon he’s just gonna sit back and make out with your former girl while you disintegrate with envy and Modern English’s “I’ll Melt With You” plays on repeat in his mind.

“So when can I see you again?”

“Really, Randy, Why don’t you wait ’til the end of the evening to say these things?

Like Julie says, Randy is “trippendicular.” He introduces her to “the real world” of alternative concert venues, where “it’s not pressure-cleaned like television.” He knows that Julie wants to be free. He knows she wants to escape the socially conformist mentality of her superficial clique. He knows she doesn’t want to be told what to do by some collar-popping Valley prep-douche named “Tommy”. Pshhh… Tommy. What a jerk.

So when Julie dumps Randy to get back with Tommy and be in the good graces of her friends, it’s OK for Randy to stalk her, before her carpool ride, at the movie theatre, and at the drive-in. It’s OK for him to get a sleeping bag and camp out in front of her house. Because he wants her to be free. He wants her to make her own decisions. He doesn’t want her to be defined by some chump in a polo. And in order for Julie to be a free, independent women, she’s gotta get with Randy. Obviously.

But really, if someone was so in love with me they slept on my front yard, I’d probably be a little creeped out. But that person probably wouldn’t look like Nic Cage, and if he/she did, I’d, like, totally make an exception. And then we could slow dance at the prom and make puppy dog eyes at each other while Josie Cotton sings “Johnny Are You Queer?”. Valley Girl is a beautiful, beautiful film indeed.