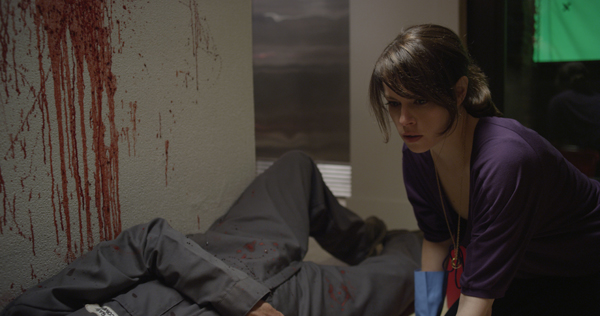 The Spanish-Canadian co-production The Returned offers an interesting spin on the zombie film, even if it does play a bit like a fourth sequel to Danny Boyle’s take on the genre that skips over “months” and simply goes to 28 YEARS Later. It’s certainly thoughtful and stylish; boasting two very good lead performances and just enough restraint to feel fresh rather than painfully obvious.

In a sort of alternate timeline version of our world today, zombies are a very much a real thing, but something that has been under control for quite a while. Through the help of a special blend of drugs and proteins, people who are bitten can come back from becoming brain dead brain eaters if treated in time and kept in check by an expensive form of injection therapy daily. However, as the movie begins, supplies are running low on the treatment and synthetic options have yielded no results. Hate groups and militias are on the rise, wiping out even those being treated just to be sure they won’t turn when the supply runs low.

It’s a solidly built world created by director Manuel Carballo and Hatem Khraiche Ruiz-Zorilla, depicting its Toronto setting almost as dreary and overwhelming as Enemy did a few weeks ago. The subtext follows in the grand horror tradition of bloodbourne pathogens automatically becoming shorthand for untreatable diseases like cancer and AIDS. But since this is no longer the 1980s and those diseases are treatable, then the subtext has to also be modified accordingly. Now with treatment, the subtext becomes a matter of affordability and accessibility to those who are most in need. As one character asks later in the movie, how can someone value their life over the life of someone else in the same situation? Even the film’s large number of villains seem to be driven by a new-school form of tea party reactionism that wants the government to stop protecting those who need protecting, and it’s a sentiment that’s spreading faster than any disease ever could.

Our heroes in this world are a loving married couple. Kate (Emily Hampshire) is a doctor that works specifically with “the returned.” She’s passionate almost to a fault, growingly increasingly tired of defending her work and treatment of men, women, and children who would otherwise turn into monsters. She has her personal reason outside of her altruism and Hippocratic Oath. Her husband Alex (Kris Holden-Ried) was a former patient that she ended up falling for. She secretly stockpiles illegally purchased injections in case the supply runs out sooner rather than later. When those wishing to eradicate the afflicted come too close to home, they pair go on the run until a solution can be found.

Hampshire has a lot to work with for her character – the pull between doing what’s right and staying vs. doing what’s best for her love – and she makes the most of it; ditto Ried as a man who only seems happy about life when he’s around his wife. Both play the weariness of this world very well and are thankfully never asked to resort to horror movie theatrics to simply get a response from the audience. They’re as grounded as the material itself, which keeps the actual zombies to a very bare minimum.

The film still ultimately gives in to the “anything that can go wrong, will go wrong” mentality of making a horror film, though. It’s a predictable affair for pretty much anyone who has seen a horror film in the past, but it gets balanced out by quieter, more personal moments to tell its pat story rather than giant set pieces or zombie rampages. It’s a little disappointing that the film heads exactly where everyone thinks it will, with characters betraying each other and the situation worsening at every turn for the couple. Thankfully, most of the second half of The Returned plays more like a paranoid thriller than a straight horror film. It’s the final edge that makes this one a better class of zombie flick than genre buffs usually get treated to.