Hey, do you like cult movies? I know I sure do. You probably do too (one would assume as much if you visited a site called Dork Shelf). There’s a brand new way to experience them that popped up in London a few years ago called Secret Cinema that’s slowly grown beyond a local phenomenon thanks to Internet folklore. The events add a new level of immersion into geeking out over a movie that you’ve seen countless times before. It’s a 360 degree theatrical event that provides a pre-show related to the movie and a setting for audiences who rarely even know what cinematic world they are entering. When Back To The Future was the subject, the entire town square was built for a night of 50s tomfoolery and a screening projected on the clock tower. 28 Days Later got an interactive haunted house with a screening on the ceiling for a zombie apocalypse shelter. Empire Strikes Back brought a life size AT-AT to the party. It’s a pretty amazing series. A unique one. And in an exciting development for nerds of drinking age, Toronto now has it’s own version.

Founded by Jennifer Dysart and Browyn Cuthbertson, The Secret Sessions serves up a similar concept for Toronto film fanatics in need of a weird night out. There have been a few performances already this week, but any writing about the experience (even from an overly enthusiastic nincompoop like myself) was limited for the sake of keeping that titular secret safe. Yet, since the first Secret Sessions even is almost over, a time has come when spoilers are allowed. So I’m going to spoil it. I’m doing it right now. The inaugural Secret Session was dedicated to Adam McKay and Will Ferrell’s surreal chauvinist satire Anchorman and it was pretty, preettty, preeettty  great. In fact, seeing it on the very night that a certain blow hard douchebag TV personality was elected president was practically therapeutic. These folks done good. You might even say it was a whale’s vagina of a good time.

Things kicked off immediately upon arrival as various 70s clad TV personalities greeted the audience with fake smokes dangling from their mouths and grabbed coats between gentle insults. From there, we all wondered into an open theater space decked out like a good old fashioned sleazy 70s coke party (minus the coke, for better or worse). A pretty damn impressive replica of the Anchorman news desk was at the front of the room with a few other props and sets scattered about for later performances. But at first it was all just open part. The audience came dressed in their finest tacky 70s outfits (aside from myself because I’m a dummy who assumed no one would actually go to that trouble outside of Halloween) and actors playing the news teamed mingled with the crowd while burritos and booze were guzzled with gusto.

Now, it’s one thing to wander around memorabilia and sets, but to actually get to interact with the finest damn crop of narcissist newsmen with menial brains and rampant sex drives ever assembled was a pretty big deal. Steve Hobbs nailed the great Ron Burgundy’s echoing swagger between sips of what looked like limitless scotch. Lars Classington scuzzed it up spectacularly (with regular recommendations of sex panther) as Brian Fantana. Matt Nadeau bellowed “whammy” loud enough for neighbouring buildings to hear it. And Will Conlon ate cardboard off of portable nacho trays in an eerily accurate version of Steve Carrell’s Brick. To fill out the room Jonathan Sconza and Emma Banigan wandered around as some additional generic 70s sleazeballs and they sleazed it well.

The cast was probably the best part of the whole experience. They were all clearly fans of the movie, nailing their impersonations and never dropping character. Anchorman was an ideal film for this particular interactive approach as those living cartoons specialized in chatting up drunken weirdoes in parties. Us audience members filled out those dazed supporting roles just fine. The cast mixed movie lines and improv with ease. Bouncing around from the surreal experience of chatting with those iconically oddball characters and other cult movies fans dressed in ridiculous outfits made for a bizarrely amusing night. It worked and to bump up the theatrical quotient the whole news team took centre stage from time to time play out beats and jokes from the movie complete with dramatic lighting and audience participation. The mix of homage and theatre and comedy and burritos and casual drinking went down just right. It fit the movie and obviously everyone willing to dress up in polyester on a Tuesday in celebration of Anchorman was guaranteed to get along juuuust fine.

Eventually everyone stumbled into the makeshift movie theatre in the centre of the space and Anchorman was projected. It almost felt anti-climatic given how clearly everyone in the room knew the film, but then the cast reenacted a handful of scenes below the screen throughout to spice things up. The cast joined just enough to augment the movie rather than distract (and in the case of the zoo fight climax, even saved one gag from the movie that doesn’t have the greatest replay value with some pretty hysterical puppet and teddybear work). When the credits rolled, we all stumbled out and damnit the whole night was a delight. 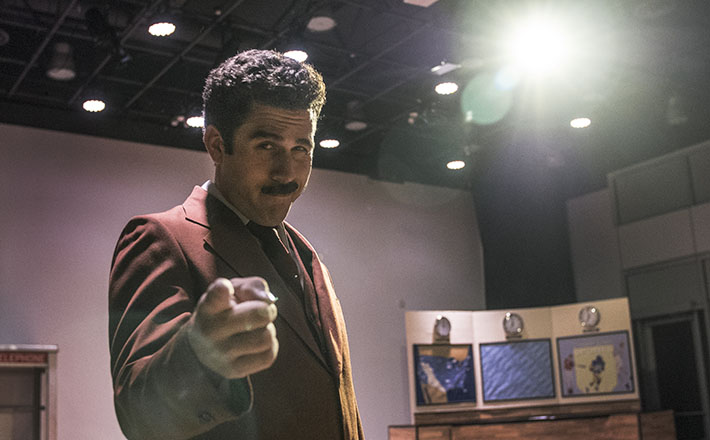 As someone who jealously followed every Secret Cinema event in London, this was an event that I anticipated with a level of excitement that could only be described as childish glee.  Certainly this sort of event won’t be for everyone (those who loath Anchorman for example, but they are a soulless crowd who can’t be saved anyways). For anyone who adores cult movies beyond rationality, this is an event series that simply must be experienced. The Secret Sessions team might not yet have the scale and resources of Secret Cinema yet, but they have their own charming approach. Mingling with movie characters and like minded movie obsessives in such a heightened theatrical setting is great idea and while it’s tough to think of another movie that will fit this specific party format so well, it’s safe to say The Secret Sessions has other tricks up their sleeve. The beauty of this concept is that it mutates to fit the film. So every one will be it’s own odd social/theatrical/cinematic experiment shrouded in secrecy. It feels like the exact sort of thing that should catch on in a movie drunk town like Toronto. At the very least, I’m in for the next round. I might even actually follow the dress code next time (especially if there isn’t one). We’ll see. Regardless, this event series shouldn’t stay secret for long. It’s good enough to even justify the use of such a horrible pun in the previous sentence.