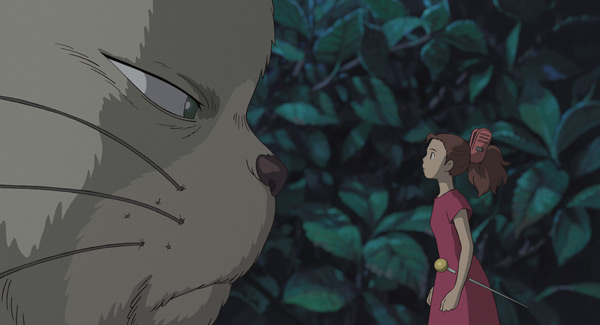 Young Shawn (voiced by David Henrie) has recently moved to the country to live with his Aunt Jessica and her housekeeper Hara (Carol Burnett). Shawn is there to kill time away from his work obsessed mother before a serious heart operation that he might not live through. In the walls of Jessica’s house live the Clock’s, a family of little people known as “borrowers” who sneak into people’s kitchens at night and take only what they need to survive and keep house. The daughter of the clan, Arrietty (Bridgit Mendler), has just turned 14, meaning she’s old enough to start borrowing on her own. But when she’s spotted by Shawn on her first mission with her father (Will Arnett), it begins a series of events that put the small family in great danger. Shawn, desperate for a friend, looks to Arrietty for someone to talk to, much to the chagrin of Arrietty’s parents.

No dubbing of a Ghibli film will ever be equal to subtitled version of the same film, but here the script holds some of the film’s wonkier elements. While Miyazaki and co-writer Keiko Niwa (and translator/English dialog writer Karey Kirkpatrick) do a great job setting up both the world of Shawn and the background of the Clocks, the film’s pacing seems a bit off. While most adaptations of Norton’s original work make it known that the housekeeper character will turn out to be somewhat villainous, here the story turns almost on a dime and simply turns Hara into someone acting crazy just for the sake of having conflict. It creates a sense of disconnect in the film’s second half that’s a little hard to get past, but forgivable in the light of the film’s other strengths.

The voice cast here mostly sounds and acts their parts appropriately, with Mendler and Arnett doing the best of the bunch. Far less successful, however, is a terribly miscast Amy Poehler as Arrietty’s mother. All she has to really do is act histrionic, but it feels almost as if she never got a chance to see her character’s motions before recording her part. But even she’s better than the abjectly dreadful sub-Tori Amos piano ballads that permeate even some of the dialog scenes in the film. Things could be going just fine until the soundtrack screeches things to a resounding halt.

What Arriettey does have going for it is that it nicely capture Norton’s message of loving all creatures great and small. It helps that this message has been something Miyazaki and company have gone back to time and time again, but it’s always harder to keep that sentiment when crafting an adaptation of an iconic work against making an original film.

As always, it should go without saying that the hand drawn animation is simply stunning, and one point even fooling me into thinking the animators somehow cheated and used real grass in scenes where Arrietty roams the gardens. The design of the characters and backgrounds in a Ghibli film often give their productions just as much heart as the story. They could probably make an entirely silent film with just as much impact as some of their greatest success, and on an artistic level, The Secret World of Arrietty follows in that grand tradition. It’s not the best the famed studio has come up with, but still more worthy than a lot of other animated films with a lot less soul.