Disney has been rolling out Studio Ghibli titles in pairs on HD Blu-ray for a while now, but we finally got Miyazaki's masterpiece Spirited Away, which is cause for celebration, and The Cat Returns ain't bad either.

With the return of TIFF's retrospective of the works of Studio Ghibli returning to the Lightbox starting this Thursday (and running to January 3rd), lets look back at our Beginner's Guide to the works of possibly the best animation studio operating today.
The Wind Rises Special Presentation Director: Hayao Miyazaki If this is indeed the final film from animation maestro Miyazaki, he’s not going out on his strongest work, but certainly his most ambitious and most adult oriented effort to date. Save for a brief opening bit involving dreams and aircraft bombers with payloads gnashing their teeth […]

A busy week for big titles on video store shelves as we take a look at The Grey, The Secret World of Arrietty, The Woman in Black, This Means War, and Red Tails. 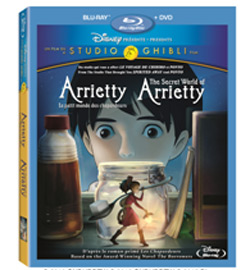