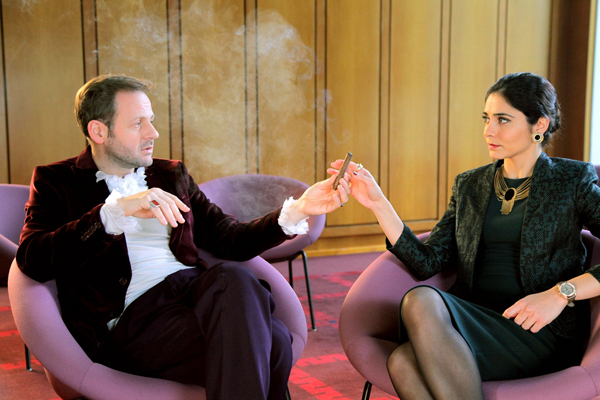 Buried within The Wagner Files is a fairly decent look at the life and controversy surrounding 19th Century German composer Richard Wagner that would be right at home on the History Channel. I certainly felt more informed about one of the world’s best known writers of opera and music, but it’s delivered with a ludicrous style that sucks the life and importance out of the more informative material. The talking heads profiled within are dull, but fine to listen to, but director Ralf Pleger peppers his film with tremendously out of place, thunderingly anachronistic, and laughably stupid recreations of theoretical historic events that sink the movie every time they pop up.

Starting with the somewhat mysterious death of Wagner from a perceived heart attack at the age of 69 and working backwards to look at the moments that led to his demise, Pleger talks with a variety of scholars, musicians, and writers to look at how the man responsible for Tristan and Isolde, Twilight of the Gods, and many other major works was a decidedly less than loveable human being in spite of his accomplishments. He bounced around from city to city acquiring massive debts wherever he went. He strung along a potentially homosexual King Ludwig in an effort to pay off his debts. He infamously wrote the anti-Semitic pamphlet “Judaism in Music.” But most important and pivotal to all the events depicted in the film was his affair with the married Cosima von Bulow, who would later become his inseparable and eventually less than desirous wife.

People unfamiliar with Wagner as a person and only know him as a historical name attached to numerous texts will certainly find a lot of new information here, and the music is certainly as hypnotic and “narcotic” as one interview subject suggests. He’s certainly an interesting character, but he’s assuredly worthy of a better profile than this slapdash effort.

Pleger has no idea what kind of film he wants to make. The interviews suggest an Errol Morris styled expose of a man whose darker side needs to be laid bare for the world to see. There are some animated recreations that add or subtract nothing. There’s some scattered footage of interesting looking modern productions of Wagner’s works that would have been nice to see more of. There are wildly out of place Jason Borne styled map sequence to depict Wagner’s globetrotting. But nothing is as horrid as the live action recreations that find Samuel Finzi and Pegah Ferydoni playing Richard and Cosima, respectively.

Obviously not acting in a time period that looks anything close to the latter half of the 1800s (including modern telephone rings and the duo riding around in newer model cars and hanging out in obviously modern condo buildings), making a suspension of disbelief that these two are even playing Richard and Cosima impossible to buy into. Not for a single second did I think I was watching a valid recreation of events, and what’s even worse is how these scenes are played for tone deaf melodramatic camp. It’s not that Finzi and Ferydoni are particularly bad, but they feel like they are from a completely different story at odds with the one Pleger should be telling in the first place. The film doesn’t slowly grind to a halt in these moments. It slams on the brakes and goes headfirst into the wall at full speed. These are the kinds of segments that will make people watching the film on DVD at home reach for the remote and the skip button as fast as possible.

Minus the God awful recreations, though, The Wagner Files isn’t totally without merit. Although I’ve seen episodes of 48 Hours Mysteries and Rescue 911 that can deal with scandalous subjects with more nuance and less flash, there’s still a decent amount to be gleaned from the material. That does not, however, make it a good film.