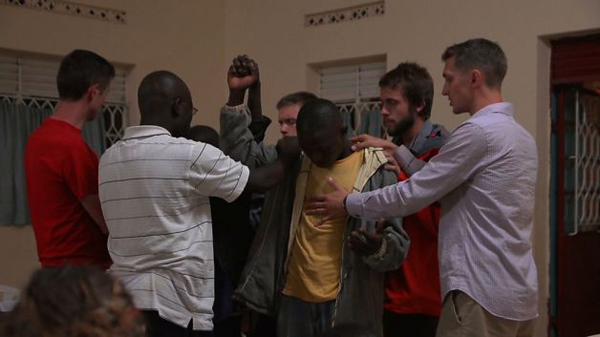 A chilling, and yet remarkably balanced look at American Christian churches staking their claim to the redemptions of thousands of souls in what they believe to be “The Pearl of Africa,” God Loves Uganda looks at a serious issue of cultural assimilation from both sides of the argument and without flinching in the face of the true believers who are all but too keen to share their beliefs against homosexuality, pushing abstinence education, and their desire to hook the country’s youthful population on Jesus as early as possible.

Focusing predominantly on the efforts of the International House of Prayer (which has the unfortunate and easily mistaken acronym IHOP), Academy Award winning short filmmaker Roger Ross Williams follows a group of young missionaries trying to import/impose their views on religion to a country already facing a massive cultural shift towards the far right and towards the Gospels. Williams also talks to members of other churches within the country who are skeptical or threatened by the events in the country.

Once the film gets around to talking about the country’s still stalled in parliament bill that would make homosexuality punishable by death, it starts covering  lot of the same ground that Call Me Kuchu did earlier this year, but expanding the view to the country as a whole rather than a few personal stories. It doesn’t feel redundant, though, because Williams also examines how the church targets outliers with low incomes (especially orphans) and the fallacy of abstinence based education. It’s a further examination into a country besieged upon by foreign interests keen on establishing the presence of a higher power the reign over the government they already have in place. 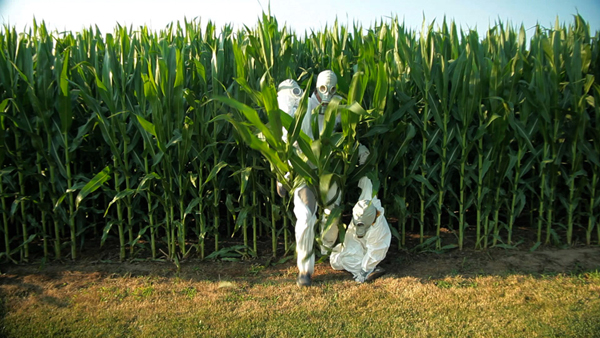 GMO OMG might be one of the most damaging advocacy documentaries ever created; not to the producers of the Genetically Modified Organisms it’s trying to expose as dangerous, money grubbing frauds, but to its very cause. It’s an amateurish, hamfisted, repetitive, and wholly useless movie that does more harm than help.

Spurred on by a desire to find out what’s in the food his children eat, filmmaker, narrator, and insufferably smug screen presence Jeremy Seifert sets out to find out what GMOs are and why major corporations have been patenting seeds and protecting their uses of pesticides and weed killers made through both natural and chemical compounds.

I feel the need to make my own politics known here for a second, because there’s no other way to describe how much I hate this movie. I do believe that the corporatization of food product manufacturing and the bullying of farmers into using genetically modified seed is reprehensible. I also think that there has to be some hard research done into the long term effects of GMOs on the human body and the ecosystem.

I’ll also preface the next paragraph by saying that I never say something in a review that I wouldn’t say directly to someone’s face.

With all that being said, there absolutely has to be a better person to make a movie about this subject than the uncomfortably douchy Seifert, who doesn’t seem like a human being, but rather a character from a Portlandia sketch. He doesn’t even really seem like a filmmaker, often coming across as an opportunist willing to exploit his own kids for cutesy montages; making them stand forlornly in front of fast food joints wearing “GMO goggles” and holding up signs of shame, and at one point even openly and prickishly mocking them ON CAMERA for eating some Breyer’s Ice Cream before exclaiming “It didn’t make him dead!” like a complete asshole. He’s the kind of guy who will go to Whole Foods and McDonalds to ask minimum wage workers if their food has GMOs in them when (1) he damned well already knows the answer and (2) he is only doing it to get footage of these unassuming rubes squirming. He’s also prone to fits of misplaced rage (“It’s pissing me off! I’m ready to get into a fist fight, like, right away.”), questioning people who don’t agree with him with ludicrous arguments (“Are you a religious man?”), and playing the “concerned father” card almost as much as he repeats the same facts over and over and over again.He repeats these facts because he can’t find one person who can back up his initial thesis that GMOs might be poisonous (a theory that should be explored, but no one has ever proved).

In the end, Seifert’s film amounts to the perfect example of a noble crusade reduced to the level of reactionary commentary. His crusade is a blindly moral one akin to exactly the same kind of ill informed mentality that he’s railing against. It’s not a serious look into a serious issue. It’s a look into one man’s psychotic break. But at least it’s well shot, and there are about 20 minutes worth of irrefutable facts that everyone should know about GMOs, but I implore you to seek the information out yourself and stay as far as humanly possible away from this trainwreck.

Rachel Parent, founder of Kids Right to Know, will participate in a Q&A after the 3:45pm on Saturday, November 23rd at 3:45pm.

Also at The Bloor This Week:

There’s still one last screening of When Jews Were Funny on Friday, November 22nd at 4:15pm

There’s a one off screening of Shane Meadow’s really great rock doc The Stone Roses: Made of Stone on Friday, November 22nd at 9:15pm, looking back on the short lived, tumultuous career and current attempted resurrection of one of the best and most influential bands of the late 80s and early 90s.

TVO also has a fundraising screening for their Doc Studio with a screening of Unsung: Beyond the Glee, a look behind the scenes of local high school choirs. That’s happening on Tuesday, November 26th at 6:00pm.

The Toronto Serbian Film Festival celebrates their opening night on Thursday, November 28th at 9:00pm with a screening of Goran Markovic’s Falsifier. Tickets are $15 and more information and tickets can be found here.