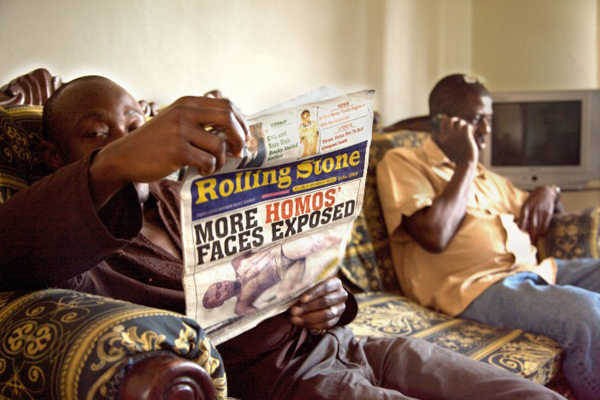 A deeply distressing and at times quite hopeful and powerful look at LGBT rights abuses in Uganda, Katherine Fairfax Wright and Malika Zouhali-Worrall set out to chronicle one important topic and unwittingly ended up documenting the last year in the life of their main subject.

In a country where a law is about to be passed making homosexuality criminalized to a point where punishment could include life imprisonment or death (for “repeat offenders” and “aggravated homosexuality”) and gay women are sometimes raped by their own family members in a bid to “cure” them, activist David Kato stands up proudly as the most openly gay man in the country and doing his part for equality when no one else will. It isn’t an easy task when local media, politicians, and the Christian clergy are willing to openly equate large groups of homosexuals as terrorist organizations akin to al Qaeda and Joseph Kony. A local news paper plasters their front page with “Pics of Top 100 Homos” and a picture of a priest calling for their hanging. Kato works tirelessly up until the time of his murder during the production of the film, at which point Wright and Worrall examine the newfound sense of grief and international attention the country gets as a result.

Taking its name for slang meaning queer, Wright and Worrall might have tragically lucked into their third act drama, but this story definitely demands to be told. Especially now given what’s currently happening in Russia (the parallels between the two countries are deeply frightening and downright sickening), the timeliness of the film couldn’t be more appropriate. It’s a strong and vital piece of work, but sometimes it’s understandably tough to take.

Iceberg Slim: Portrait of a Pimp

No one ever said that the pimp game was easy, or that it would even necessarily be a pleasant thing to learn about, but director Jorge Hinojosa and producer Ice T’s look at best selling novelist and former big deal, hot shot player Iceberg Slim (real name: Robert [Maupins] Beck) acts as more a cultural history lesson that a how to manual for running prostitutes on the streets.

Slim’s upbringing in an abusive family with a constantly hustled mother and a string of lowlifes for father figures led to his becoming an influential and notorious pimp in 1940s Chicago. He’d go to jail several times before finding his voice as a writer. His ability to craft deeply confessional biographies, meta-fiction, and essays became the cathartic outlet he needed to leave the game behind.

Through archival footage of the late Beck relating the story between the lines, talks with his wife and daughters, appearances from several celebrities who are fans (Chris Rock and Henry Rollins, most notably), and a somewhat surprisingly high number of academics (who it’s always amusing to see talking about pimps and hos) , Hinojosa effectively conveys Slim’s cultural significance to the black community in the 60s and 70s. His books were depressing, confrontational, extremely detailed (but never intended to be the study guides some young thugs took them to be), and wholly personal. They were the antithesis of Ralph Ellison, and one of the few examples of a true African American experience at the time. The production values aren’t extremely high on this one, but the point gets nailed quite nicely with very little filler.

Also at the Bloor this week:

The Doc Days of Summer series, showcasing some of this year’s most popular releases at The Bloor, takes a break this week, but comes back in full force for a full week of nothing but greatest hits the week after.

The Globe and Mail’s Foreign Dispatches series returns on Wednesday, August 26th at 6:00pm with a screening of The Human Scale (a look at the link between population growth and encroaching urban architecture cropping up as a result) and a talk with International Affairs columnist Doug Saunders. (Note: Advance tickets for this event are currently sold out. A limited number of rush tickets may be available on the day of the show, 15 minutes prior to showtime.)

Also, in a bit of a nod to the old school, The Bloor will hold a free screening and the Canadian premiere of the horror sequel The Collection (sequel to the sleeper hit The Collector) on Thursday, August 22nd. Doors at 10:30pm, film at 11:00pm, tickets available starting one hour prior to showtime.